As the United States braces to withdraw its combat forces from Iraq, the country’s Kurdistan Region is emerging as the scene of a mounting struggle for control between Turkey and Iran. 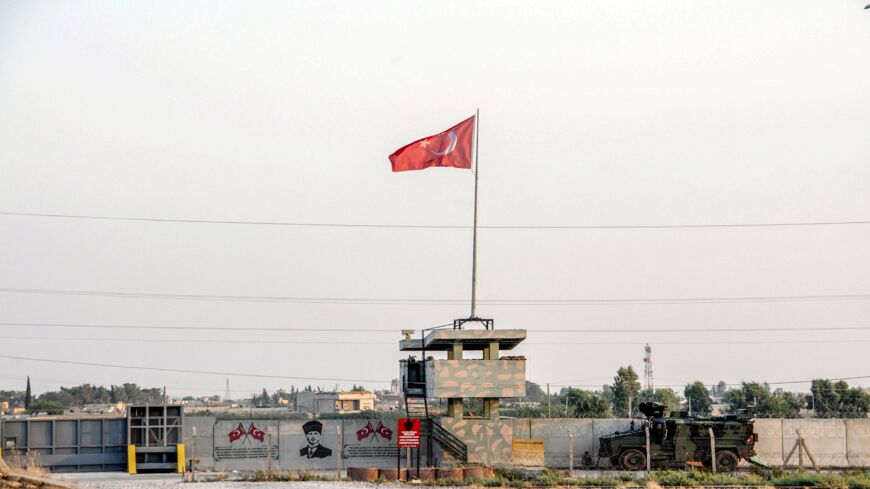 A Turkish military truck patrols next to a Turkish flag hoisted at the border with Syria on Aug. 14, 2019, in Akcakale, in Sanliurfa, southeastern Turkey. Turkey has repeatedly threatened to launch an assault east of the Euphrates River against the YPG, which it says is a "terrorist" offshoot of the outlawed Kurdistan Workers Party. - DHA/AFP via Getty Images

Turkey’s back-to-back air raids in Iraq’s Yazidi region of Sinjar this week resonate as stern messages to Tehran and Baghdad as the Turkish-Iranian rivalry appears to escalate on Iraqi territory, increasingly drawing in the Iraqi Kurds.

The two deadly strikes, which came ahead of a planned regional summit in Baghdad, targeted the Sinjar Resistance Units (YBS), a Yazidi militia created after the Islamic State’s (IS) brutal onslaught on Sinjar in 2014 with the help of the Kurdistan Workers Party (PKK), the armed outfit that has long fought Ankara and is designated as a terrorist group.

Ankara and Tehran are both irked by each other’s moves in their common neighbor Iraq. Ankara is wary of Iran extending its influence to Kirkuk and Mosul via its allies in Iraq’s Popular Mobilization Units (PMU), while Tehran is annoyed that Turkey’s pursuit of PKK militants has led to an expanded Turkish military presence and de facto buffer zones in the region.

For Ankara, the sole aim of its military operations — extending from the mountains along Kurdistan’s northern frontier to Sinjar on the Syrian border — is to eliminate PKK elements who have long used northern Iraq as a springboard for attacks on Turkey. From Ankara’s vantage point, the YBS is a PKK offshoot, no matter that it was created against IS, is made up of Yazidis and is part of the PMU.

On Aug. 16, a drone strike carried out jointly by Turkey’s military and intelligence service targeted a vehicle in Sinjar, killing three YBS members, including senior commander Said Hasan Said, and leaving three civilians wounded. According to Turkish media, the strike targeted senior PKK militants on their way to a meeting with Iraqi Prime Minister Mustafa al-Kadhimi, who was visiting Sinjar that day.

The following day, Turkish F-16 jets pounded a clinic in the village of Sikeniye, killing nine people, eight of them Yazidis, according to Yazidi sources. The Turkish media claimed that Mazloum Roj, a senior PKK militant in charge of Sinjar, had been hospitalized in the clinic after surviving the Aug. 16 strike with injuries, and that 10 other PKK members were present in the building. The clinic was one of six YBS medical facilities that also serve civilians in the region.

Turkey may view the YBS as a legitimate target, but for the Iraqi government, the group is a local force under the PMU banner. The killed YBS commander was formally the head of the PMU’s 80th regiment and also an influential figure in the Yazidi community, where anger with Turkey is simmering. The escalating Turkish attacks in the region have left Baghdad in a tight spot. The central government is under fire for failing to protect the YBS and the Yazidis and, more generally, for failing to stop violations of its sovereignty.

The tensions in the region, however, go beyond the PKK, as evidenced by a series of events that preceded the Turkish strikes.

On Aug. 10, the Nujaba Movement, a pro-Iranian PMU faction, posted a video in Turkish on Twitter, threatening to take the conflict to Turkey and target the Turkish economy unless President Recep Tayyip Erdogan puts an end to cross-border incursions. Addressing the Turkish people, the voiceover in the video says, “Turkey is seen as an occupier in Iraq. … We would never like to clash with neighbors, but your leaders are taking things toward a war with all that invasion, violations and attacks.” Warning of repercussions for Turkish exports to Iraq, the message continues, “Don’t let Erdogan weaken your economy. … The era of the Ottoman Empire is over. Respect for the borders is the only way of avoiding inconclusive wars. … Cooperation and compromise between Ankara and Baghdad are the only way to cope with the militants and terrorists in the Kurdistan Region. (…) Stop the Erdogan government before it’s too late. Don’t let your children relive the coffin experience of colonialist America. We truly don’t wish to take the conflict to your country.”

Two days after the message, four rockets were fired on the Bashiqa base near Mosul, where Turkish forces are stationed. No one has claimed responsibility for the attack.

Meanwhile, PMU chief Faleh al-Fayyad visited Erbil Aug. 11 for talks with Massoud Barzani, leader of the Kurdistan Democratic Party (KDP), the dominant political force in Iraqi Kurdistan. The talks, which followed Fayyad’s trip to Tehran, focused on enhancing coordination between Kurdistan’s peshmerga forces and the PMU, according to Kurdish sources. Iraqi Arab media, meanwhile, claimed Fayyad had delivered a message from Iran, urging Iraqi Kurdistan to withhold support for Washington in US-Iranian disputes and not allow US bases on its territory.

Iraqi Kurdistan Prime Minister Nechirvan Barzani had also traveled to Tehran Aug. 5 to attend Ebrahim Raisi’s inauguration and personally meet with the new Iranian president the following day. The visit had some extraordinary aspects in terms of protocol and the exchanges between the two leaders. The Kurdistan flag, rather than the Iraqi one, was in place for Barzani’s arrival at the Mehrabad Airport. During the meeting, Raisi stressed that regional countries should stand against the interference and influence of foreign powers, while Barzani said, “We consider ourselves part of Iran and the Islamic Revolution,” according to the Iranian readout of the talks.

While Barzani enjoyed a flattering reception by Raisi, a prominent Iranian Kurdish exile went missing in Erbil. Mousa Babakhani, a senior member of the Kurdistan Democratic Party of Iran (KDP-I), was found murdered in a hotel room the following day. The Erbil police said the suspected assassin had fled to Iran, while the KDP-I put the blame on Tehran, which, in the past, has launched missile attacks on Iranian Kurdish oppositionists taking harbor in Iraqi Kurdistan.

Only several days later, Ali Shamkhani, the secretary of Iran's Supreme National Security Council, urged Iraq to expel Iranian Kurdish groups from Kurdistan. Speaking at a meeting with Iraq’s foreign minister in Baghdad, Shamkhani warned of “preemptive actions” unless the Iraqi side takes “more serious” measures to remove the dissidents.

All those developments offer ample clues as to what priorities Tehran would pursue in Iraqi Kurdistan under Raisi. Accordingly, the region would no longer be a safe place for Iranian Kurdish oppositionists, while Erbil would face mounting pressure to deny the United States bases on its territory as US forces leave Iraq and Iranian-linked PMU forces would maintain a menacing posture against the expansion of Turkey’s military presence in the region.

All those issues are likely to come up at the regional summit that Baghdad is planning to host in late August. According to Iraqi media, Iran and Turkey have confirmed their participation in the gathering, the date of which has yet to be announced.

The Turkish-Iranian bickering in Iraqi Kurdistan is likely to further escalate in the coming months as Iraq heads to parliamentary elections in October and the United States withdraws all its combat troops from Iraq by the end of the year.