The judge in the trial of three Al Jazeera journalists in Egypt based his verdict on testimony provided during the interrogation of one of the defendants, Baher Mohamed, but the validity of Mohamed's statements is questionable. 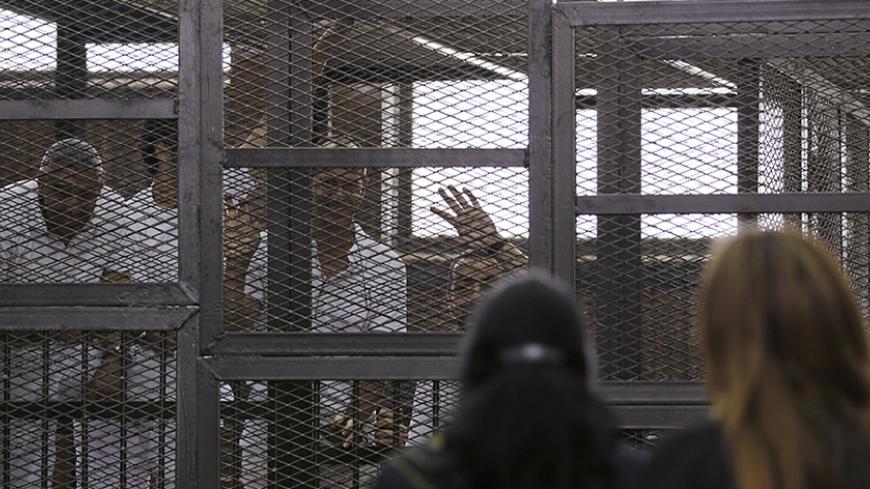 Al Jazeera journalists (L-R) Mohamed Fahmy, Peter Greste and Baher Mohamed wave to a friend and Fahmy's fiancee as they stand behind bars in a court in Cairo, June 1, 2014. - REUTERS/Asmaa Waguih

CAIRO — Oct. 23 marks the 300th day behind bars for the Al Jazeera journalists Peter Greste, Mohamed Fahmy and Baher Mohamed, who were convicted in June of aiding terrorists (the Muslim Brotherhood) and endangering national security. On Oct. 19, Fahmy's family posted to his Twitter account some of the messages he had wanted conveyed to the public. One tweet read, "I have forgiven a certain defendant who harmed us and [the Al Jazeera] network beyond repair in this silly case. Hope God does." Reading through the several hundred pages of the case file, it is not difficult to identify the "certain defendant" who might have inexplicably led himself and his colleagues to jail.

For the first few days after the arrest of Fahmy (Al Jazeera's Egyptian-Canadian Cairo bureau chief) and Greste (an Australian correspondent) at the well-known Marriott Hotel in Cairo, Mohamed — their Egyptian producer, who had been arrested at his house on the outskirts of Cairo — provided extensive testimony under interrogation incriminating the network, Greste and his predecessor, Dominic Kane.

The 46-page chapter in the case documents includes the entirety of Mohamed's testimony during questioning by the prosecutor, Ahmed Abdel Aziz, that began on Dec. 30, 2013, at 9 p.m., less than 24 hours after his arrest. The interrogation was attended by an Al Jazeera lawyer and Mamdouh Khodier, secretary for the prosecution.

"I started working with Al Jazeera English in May 2013," Mohamed testified. "My second report was about Bassem Youssef [and] his satirical show, 'El-Bernameg.' The channel asked me to present him in a bad way and focus on the legal action people had taken against him, interview Muslim Brotherhood supporters so they could comment on Youssef in a negative way."

Mohamed's testimony cited several incidents in which Al Jazeera allegedly asked him to alter his reports, including coverage of the June 30 protests, when he claimed he was asked "to film Tahrir Square from an angle that shows it empty." Mohamed also said that Kane had left Al Jazeera in November 2013 and that Peter Greste had arrived to replace him as the network's correspondent. In fact, however, Greste arrived in mid-December, exactly two weeks before his arrest along with Fahmy, who only began working for Al Jazeera a few months after Mohamed got his first assignment.

Mohamed also testified, "What I know is that Dominic and Peter were able to bring in large amounts of money when coming through the airport, but I don't know where they got it from." A source close to Al Jazeera who spoke on condition of anonymity said, "Dominic Kane, Peter Greste and others are reporters and correspondents who have nothing to do with finances. The most they would pay for is a hotel room, so to accuse them of smuggling big sums of money is just ridiculous."

When asked by the prosecution why he continued working for Al Jazeera despite the accusations he made, Mohamed said, "Their payments were very big, and throughout my first contract, I was able to keep them [Al Jazeera] from interfering with my work. And this is what I did throughout the period of my second contract." Throughout his testimony, Mohamed denied succumbing to pressure from Al Jazeera to fabricate reports about Egypt.

On Feb. 20, the prosecutor quoted some of Mohamed's testimony in the indictment he read aloud in court. At that time, the families of the defendants and the press had been prevented from entering the courtroom until an hour into the session, which apparently kept the media, both local and international, from reporting on Mohamed's shocking testimony.

While it might seem likely that Mohamed was subjected to some sort of pressure, Farag Fathy, the former Al Jazeera lawyer who represented Mohamed and Greste and witnessed their interrogations, insisted that none of the three had been subjected to any type of violation. "No one was tortured, pressured or even harassed during the arrest or before questioning," Fathy told Al-Monitor. He stated, "Baher's questioning started hours after his arrest, which left no window for anyone to pressure him."

Marwa Omara, Fahmy's fiancée, said, "I prefer not to comment, but this matter is extremely serious. Lawyers told us it would disappear, but it didn't, and the press and families were not allowed in court when the prosecutor made their case and presented Baher's testimony." Months later, the judge's 57-page verdict quoted Mohamed's testimony as the basis for the seven years handed to Fahmy and Greste and the 10 years given to Mohamed and others indicted along with them.

Omara explained that the only way to challenge Mohamed's testimony is for Al Jazeera to present all of Fahmy and Greste's productions during their short time with the network and to provide evidence proving that they did not work for Al Jazeera during the period that Mohamed claims to have received orders to fabricate reports.

"We hope Al Jazeera contests this testimony by showing the videos in the retrial," said Omara. Greste's family, Kane, and Al Jazeera did not comment on the matter.

When reached for comment, an Al Jazeera spokesman said, “Baher Mohammed pled 'not guilty' at the original trial. He, along with his Al Jazeera colleagues, has lodged an appeal against the conviction based on the procedural flaws in the case. Nothing was presented in court which backs the absurd allegation of “false news.” We made available all of our coverage from 2013 for anyone to see for themselves how ridiculous the charge is www.aljazeera.com/freeajstaff. Given the upcoming appeal date, it would be inappropriate to comment further.”

Meanwhile, Abdelsattar el-Balshy, a prominent Egyptian lawyer, explained to Al-Monitor, "[His] shocking testimony will haunt Baher even through the retrial, but will not affect other defendants if they prove its false nature. In court, confessions are considered unchallenged evidence as long as they aren't made under pressure."

He further stated, "I don’t think this person [Baher Mohamed] was subjected to any pressure. If he was, why didn't he complain to the judge in a courtroom full of press workers, and why didn’t his lawyer and Al Jazeera file complaints demanding another interrogation by the court itself?"

Balshy also offered what he believes to be an unlikely scenario, stating, "Maybe Baher accepted a collaboration deal with the Egyptian authorities, which is seemingly discredited by the fact that he is sharing the same Tora Prison with his colleagues, and many Muslim Brotherhood figures, instead of being in a separate and more protected place, which is the normal procedure with anyone whose testimony might bring them harm."

Another possible scenario is that Mohamed voluntarily collaborated with the hope of clearing himself at the expense of the others. This could be the case given his pattern, evident throughout the 46 pages, of accusing Al Jazeera and his colleagues of the alleged illegal activities while insisting that he had refused to succumb to the pressure and continued instead to work, as he said, "in a way that satisfied God and my conscience."

This story has been updated with a response from Al Jazeera received after press time. 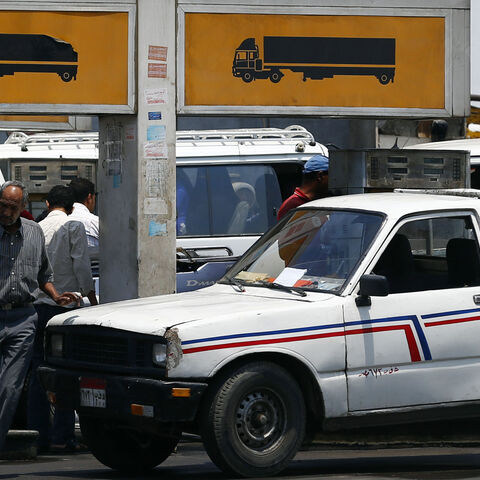