Journalists become the story in Egypt

International and social media coverage may have resulted in improved prison conditions for detained journalists. 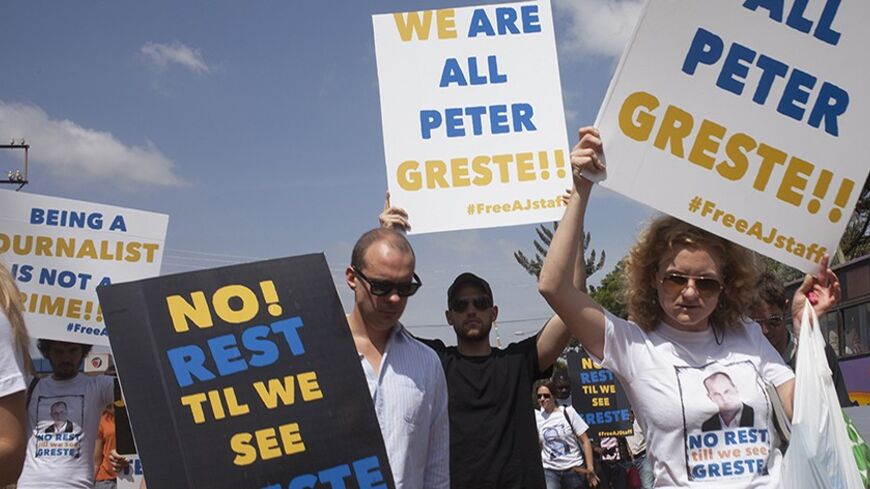 CAIRO — In his second letter penned from an Egyptian prison, Australian journalist Peter Greste wrote, “Journalists are never supposed to become the story.” But due to unrelenting pressure by family members and supporters, he and colleagues netted in the state’s crackdown on the media have become an international story — which appears to be helping to improve their treatment in prison.

“The conditions that they are being held in now are much better than before. Definitely a result of foreign media pressure,” tweeted the family members of Greste’s detained colleague, Mohamed Fahmy, from his Twitter account on Feb. 5.

Greste, Fahmy and their Al Jazeera English colleague Baher Mohamed were among 20 defendants (mostly Al Jazeera personnel) referred to trial on charges of aiding or joining a terrorist group and threatening national security. The prosecutor's statement accused the three of manipulating video footage “to produce unreal scenes to suggest abroad that the country is undergoing a civil war.”

A campaign first begun in Kenya to support Greste and other detained journalists in Egypt is growing daily, expounding the message that “journalism is not terrorism.” Supporters across the world are sharing photos with their mouths taped shut, holding handwritten signs with the hashtag #FreeAJStaff.

News feeds of journalists in Egypt are filled with as many tweets and posts about detained peers as other breaking news. The attention is working.

Fahmy’s family members also tweeted from his account on Feb. 5 that the three journalists are being held in the same cell. The news comes as a great relief to supporters who have been worriedly reporting on their ill-treatment in prison — including the detention of Fahmy and Mohamed in insect-infested solitary confinement cells in a maximum security wing of Tora prison, 24 hours a day, for more than a month without beds or sunlight, sometimes without blankets.

The move by prison officials came after a few developments this week that fueled international backlash against the detention of journalists in Egypt. Most prominently, a 22-minute arrest video seemingly released to support the case against Fahmy and Greste immediately backfired, with many on social media ridiculing its dramatic soundtrack and ill-informed interrogators.

The footage was taken in the Marriott Hotel room in Cairo where Al Jazeera English was operating, which has been called by authorities and echoed in some local media as a “terrorist cell.” The Qatari-owned Al Jazeera English and its Arabic-language Mubasher Misr channel are widely denounced in Egypt as mouthpieces for the Muslim Brotherhood, which has been labeled by the government that ousted President Mohammed Morsi as a “terrorist organization.”

The soundtrack played with the footage (aired on the privately-owned Al Tahir channel) is from the sci-fi film “Thor: The Dark World.” The camera pans over laptops, filming equipment and notepads. Fahmy, an Egyptian-Canadian journalist who previously worked for CNN, is seated next to a silent Greste, calmly answering questions in Arabic to an interrogator who is off-camera.

“When was the last time you went to Qatar?” an interrogator asked Fahmy and Greste. “So you conduct an interview and they send you money?” Fahmy replied by explaining how a journalist’s salary is earned.

A litany of criticism followed the video’s broadcast: “That AJ arrest video tarnished Egypt's image more than any mason spy terrorist foreign journalist could ever hope to do,” tweeted Egyptian-British journalist Sarah Carr. In an interview with Mada Masr, Fahmy’s brother said the video was “a blessing in disguise,” for showing legal violations and his brother’s clear responses.

Al Jazeera officials denounced the video as violating legal and professional standards, and dismissed it as propaganda. Organizers of the #FreeAJStaff campaign (first begun in Kenya in support of Greste in particular, who reported from there for decades) protested outside the Egyptian Embassy there this week, drawing dozens of news cameras and pushing international coverage. White House officials said this week they have asked Egypt to release the journalists.

But while an improvement in their prison conditions is promising, journalists here continue to work under the threat of a continuing government crackdown that remains unclear in scope and legality, sometimes aided by the public.

In tense crowds on the third anniversary of the January 25 Revolution, journalists accused of reporting for Al Jazeera were beaten or forced to flee attack. A number of journalists were arrested that day and reports of new arrests continue. After visiting Al Jazeera reporter Abdullah Elshamy in prison on Jan. 28, his brother Mos’ab reported that he learned their other brother had been detained briefly that day for “possessing a camera with protest photos on it.”

Elshamy and Al Jazeera colleague Mohamed Badr were imprisoned five months ago, arrested while reporting during a massive sweep of Morsi supporters after his ouster last July. An Egypt court acquitted 62 people including Badr, but Elshamy’s detention was renewed for an additional 45 days this month.

Elshamy, 25, has been on a hunger strike since Jan. 21, and wrote in a letter that he’s been wondering how much more he can endure.

“I've lost a number of pounds. I only rely on liquids, the littlest effort makes me feel dizzy,” he wrote. “The ongoing regression against journalists occupies my mind these days. It's unfortunate for aspiring young reporters to work in such atmosphere that forces you to choose: either with us or you are against us.”

In addition to the threat of attack, injury, death or arrest while reporting amid clashes or in tense crowds, a few journalists here are even expressing worry at the sound of their doorbell ringing, after several foreign and Egyptian journalists were arrested from their homes in recent weeks, some remaining in detention.

Egyptian filmmaker Hossam al-Din Salman al-Meneai was detained after being arrested from his apartment on Jan. 22 with his flatmate Jeremy Hodge, an American translator. During the pair’s detention, Hodge said in a statement he witnessed Meneai being regularly beaten by police and National Security. A police officer even put a gun to Meneai’s head, threatening to pull the trigger, he said.

“For the first time in two years in this country I don’t feel safe covering anything or asking any questions,” tweeted Cairo-based reporter Adam Ramsey this week.

Bel Trew, the Egypt correspondent for The Times, asked friends to report a Twitter user who had been calling for the home addresses of foreign journalists in Egypt “to be made public on Twitter and Facebook to facilitate attacks.”

In another post she wrote, “Every time someone rings my doorbell my first unconscious thought is: Is that the police?”