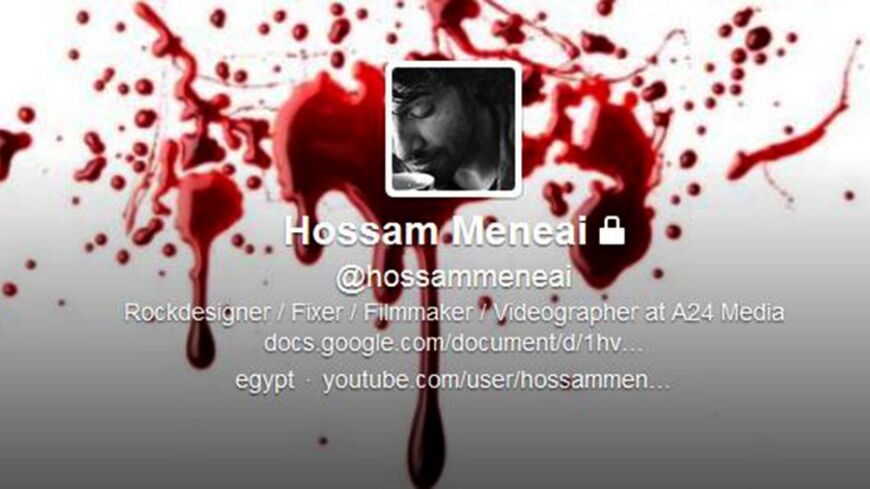 Hossam al-Meneai, an Egyptian filmmaker, has been detained by authorities. - @hossammeneai

CAIRO — Sometime after 5 p.m. on Jan. 22, a group of Egyptian State Security officers took the eight-story elevator ride to an apartment where Hossam al-Meneai, Jeremy Hodge and Nizar Manek were living.

The Egyptian filmmaker from El Arish, the American translator and the British journalist were in a block of flats full of diplomats, but after a few hours Hodge and Meneai were taken away, later accused of "spreading false news" to foreign countries and "threatening the stability of the state." Similar charges have been leveled against professional journalists. According to lawyers, investigators are concerned by the fact Meneai had footage of the 2011 revolution and last summer's Muslim Brotherhood sit-ins on his laptop and camera.

Meneai denies the charges and denies he is a journalist, lawyers say.

Inside the police station, Hodge saw his friend being beaten four times. "At one point, a guard pulled out a gun, pointed it at Hossam and threatened to kill him."

They were separated. During his detention, Hodge was kept in a cell with political prisoners. "The inmates were mostly [Muslim] Brotherhood affiliates and sympathizers. Many had been held since Oct. 6 on trumped-up charges of violence."

Both Hodge and Manek have since left the country. They are now campaigning for Meneai's release from abroad with the help of government officials, lawyers and human rights organizations.

"Hossam is just one more Egyptian who's had his basic rights trampled over," Manek claims. "I've lost count of the number of people being detained for all sorts of strange reasons." While international awareness of what is happening in Egypt is growing, many people like Meneai are not afforded the same level of outrage. "The fact that the security services came to our apartment and interrogated relatively ordinary people shows this arbitrary crackdown has really taken on new proportions."

The details of Meneai's detention have not always been clear, although he is currently being held in Dokki police station. Nobody knew where they were for four days, confirming — lawyers claim — that this was not merely a public prosecution but a national security investigation. Friends are told a hearing to review Meneai's case is scheduled for Feb. 8.

Ahmed al-Sandabasy, a lawyer at the Hisham Mubarak Law Centre in Cairo, met and spoke with Meneai for 10 minutes on Monday evening, inside Dokki police station. "We spoke about how it's going inside and if [the police] were beating him or not." Meneai apparently asked for blankets, clothing and phone numbers of friends still in Cairo. "But I think he's fine," Sandabasy explains. "He's depressed, but he just wants to know how long he'll be there for."

"They have stopped beating him," the lawyer claims. "We know some people in the police station, and we're pretty sure now that there have been no beatings."

On top of the highly publicized crackdown against professional journalists, independent filmmakers such as Meneai are now falling foul of the authorities.

"One of the aspects of recent weeks and months is that there is no real logic to who gets targeted," independent filmmaker Philip Rizk says. "It's just whoever falls in the viewfinder of whatever [state] apparatus is hunting people."

Sandabasy suggests the three flatmates may have come into focus because Meneai is from the Sinai Peninsula, was living with two foreigners and may have been seen by a neighbor with a camera. "There's this populist atmosphere in Egypt now. You could say it's down to the media, because for the last six months it has been the media of the regime," he explains. "Everyone becomes a secret policeman."

Manek confirmed the investigation had come from a tip-off: "I found out that the reason these people had turned up at our apartment was because someone had made an accusation that either we were 'spies' or that there were 'spies' in the building."

But the filmmaker's recent CV shows little signs of espionage. Shortly before his arrest, Meneai was working on a documentary about "inspiring Africans" including Egypt's former president, Hosni Mubarak, according to a Jan. 31 letter to the Egyptian government sent by A24 Media, which commissioned the film. "We hope that Mr. Meneai's work with [us] has not led him to any problems with the authorities," the letter read.

"To hold someone in custody without any knowledge of what that person is doing is not fair," says A24 manager Tabitha Muthoni. "You have print journalism and you have reporters. … And then you have the technical guys. That's what Hossam does. Hossam is a filmmaker."

Meneai was also commissioned by Russian state TV channel Culture "to shoot the Christmas Liturgy," according to another letter from an editor.

"My understanding from the State Information Services [SIS] chairman [Ambassador Salah Abdel-Sadek] is that a journalist constitutes a correspondent or a photojournalist," International Press Institute (IPI) representative Timothy Spence says. "So I assume [Meneai] might fall under that."

Contacted by Al-Monitor, Abdel-Sadek says he regards those working in Egypt without a permit as "fishy."

"If you do not have a license and you're filming in the streets for commercial purposes, it's criminal," he explains. This view poses a threat to filmmakers and citizen journalists who are increasingly working in a legal gray area that the authorities see in more black and white terms.

"[The IPI's] position is that these charges of false news and working without a permit are arbitrary and capricious, and they seem to be aimed exclusively at intimidating and harassing journalists," claims Spence, who last week headed an emergency delegation to push the Egyptian authorities to release journalists currently being detained. Two days later, 20 Al Jazeera employees were referred to court on terrorism charges. Mohamed Badr, a cameraman with the Qatari network, has since been acquitted of charges linked to violence in Cairo's Ramses Square in August 2013, although he is yet to be released.

"What happened, starting on Jan. 25, 2011, is the dynamic on the street changed as far as filming and photographing went," Rizk says. "One of the big changes during the revolution was that in a sense we took back the streets. We couldn't be stopped every two minutes, by police or everyday citizens, for permits or permission to film." Is that changing?

"With Hossam being accused of having footage of the revolution this regime celebrates … this kind of accusation shows the absolute hypocrisy of the regime," claims Rizk. "It celebrates the revolution on the one hand, and then on the other locks someone up on charges of photographing this revolution."

Meneai's story is just one in a growing crackdown that, many claim, aims simply to silence dissent and lock up anyone who does not appear to be conforming. The same charges as those brought against foreign and Egyptian journalists are now beginning to spread.

"What is false news anyway?" Spence asks. "That's for editors to decide, not a street cop."