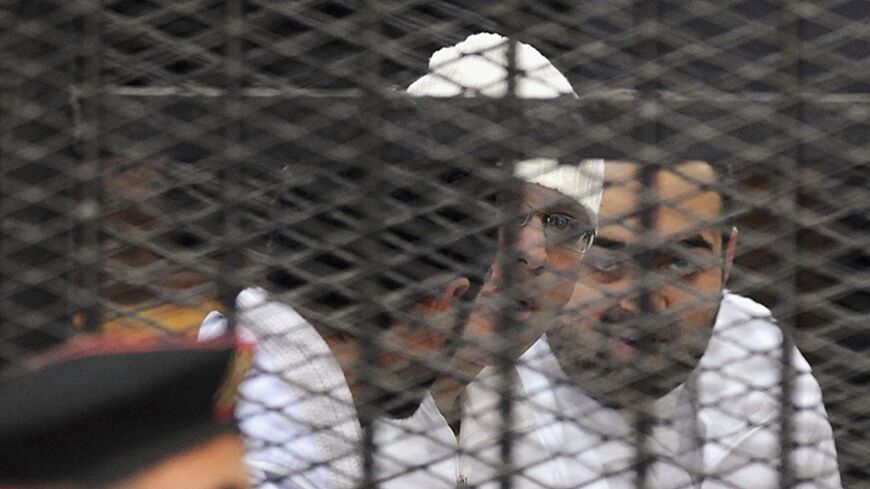 TORA, Egypt — If the first week of 2014 is any indication of what activists may face in the third year since the uprising that forced Hosni Mubarak from power, government critics and their lawyers say the road before them is long and treacherous, as Egypt’s security state is criminalizing any dissent found along its political road map paved with the slogan “stability and security.”

The activists netted in recent crackdowns by the authorities who ousted President Mohammed Morsi had played leading roles in mobilizing for the toppling of Mubarak, and against the Islamist rule of Morsi. Now, they are facing prison for protesting, this time against a government that came to power after massive rallies, which has since enacted a law banning spontaneous protest and designated its largest opposition group, the Muslim Brotherhood, “terrorists.”

Today, a number of activists and journalists are sitting in cells inside the notorious Tora prison — an expansive dust-hued compound about 45 minutes south of Cairo’s center — snarled in a justice system that remains creaky, cloudy and driven by politics. High-profile arrests, trumped-up charges and public defamation campaigns have successfully restored fear and disengaged the public from protesting, with few supporters attending recently scheduled hearings.

Just a handful of activists sat outside the Cairo appellate court at the Tora prison on Jan. 8, awaiting the scheduled appeal of three prominent activists sentenced to prison for violating the new protest law. But they and a dozen defense attorneys found the black gates shut. Judges had moved or postponed the day’s cases without notification. Lawyers for more than 300 Muslim Brotherhood members left for downtown, where their hearings had been moved.

Meanwhile, a defense attorney for activist Ahmed Maher chain-smoked cigarettes while he waited for a new appeal date. “Even us lawyers don’t know,” the defense attorney, Mohamed Gahin, said. “They do this all the time.” He was later told to return Jan. 9.

Gahin said he blamed himself and the defense team for failing to recognize the state’s desire to make an example of the activists with a speedy trial in December that resulted in the first convictions under the new protest law. Maher and activists Ahmed Douma and Mohamed Adel, founders of the April 6 Youth Movement that organized protests of the 2011 revolution, were sentenced to three years in prison and 50,000 Egyptian pounds ($7,181.55) in fines for illegal protests and assaults on police officers.

“Now we will be asking for more time,” Gahin said, referring to the appeal. “We haven’t even seen the case documents yet. We need to study them. What we need now is time.”

Time is all Gahin and more than 40 defense attorneys had on Thursday while they waited more than five hours outside the appellate court, sometimes in light drizzle, for a judge to arrive.

Most of the attorneys were representing Brotherhood clients, and many left after being told their cases would not be heard. Lawyers for the three activists and several Brotherhood attorneys exchanged jokes and political jabs as they stood in separate groups before the police, but later walked to a local cafe outside the compound to smoke shisha and drink tea while they waited.

Renowned human rights attorney Ahmad Seif chatted about the day’s news, including arrests for distributing posters against a new draft of the constitution, which goes to a nationwide vote next week and is being lauded as the first step on the transition road map drawn up by the army.

Seif, who was imprisoned for five years under Mubarak’s regime, said the repression that civil society is facing today rivals the politicized trials seen under the British occupation of Egypt. “We are worse now than the Mubarak era,” he said. “We went way back.”

His son, activist Alaa Abdel Fattah, is imprisoned in the same cell block as Maher, Douma and Adel. He was arrested under the new protest law in late November with two dozen other activists.

His sister, activist Mona Seif, tweeted that detained Al Jazeera journalist Peter Greste is in the cell next to Fattah, “so at least they can talk through the walls, and they get to share books.” Greste and three other Al Jazeera journalists are detained for accusations related to “terrorism.”

Maher, Douma and Adel have told friends they have been placing their meals in Fattah’s cell to avoid being accused of eating while on a hunger strike. The three activists have resumed a strike they first began Jan. 1, said Maher’s wife, Reham Ibrahim, after prison officials failed to allow visits from family members. They spend only four hours a day outside solitary cells.

Ibrahim shrugged off the long wait on Thursday, saying, “We do this almost every day.” Now a regular outside the prison, she’s been turned away each time she has tried to visit her husband. Douma’s wife, Nourhan, was also denied a visit recently. Douma is diabetic and has said in a statement he is refusing to end his strike or allow a glucose drip, even if he “goes into a coma.”

“It’s all political games,” Ibrahim said about the delays in the appeal hearing for her husband and the other activists. “It’s all because of the political situation in the country right now. What the government is doing is trying to make him disappear from the political scene.”

A series of continuous blows to activists in the new year includes a one-year suspended sentence for Seif, Fattah and activist Ahmed Abdalla for a reported arson attack on the campaign headquarters of Ahmed Shafiq, Mubarak’s prime minister. The mother of Fattah and Seif, Laila Soueif, who wrote in a Facebook statement: “This is another example that the judiciary is no longer concerned with justice: It’s simply handing down politicized sentences.”

The sentences will come into effect if they are convicted of any other offenses, defense lawyer Ragia Omran said, such as the charges Fattah faces. The sentence is “a clear indication that Judiciary is politicized. Road is long,” Omran tweeted, adding that the activists plan to appeal.

Also sentenced were seven activists in Alexandria to two years in prison for protesting without permission. The activists were protesting during the retrial of police accused of killing Khaled Saeed, an iconic figure whose death is viewed as one of the catalysts for the revolution.

"This attempt to suppress protest and scare us into giving up our rights will not succeed,” Seif wrote on Facebook, urging activists to focus on the cases of all those “unjustly detained.”

Her brother has been waiting in prison a month and a half for a trial date, while the appeal for Maher, Douma and Adel was postponed to Jan. 21, after the referendum on the constitution.