The release of recordings of telephone conversations among Egyptian activists has sparked a new debate over media freedom and privacy. 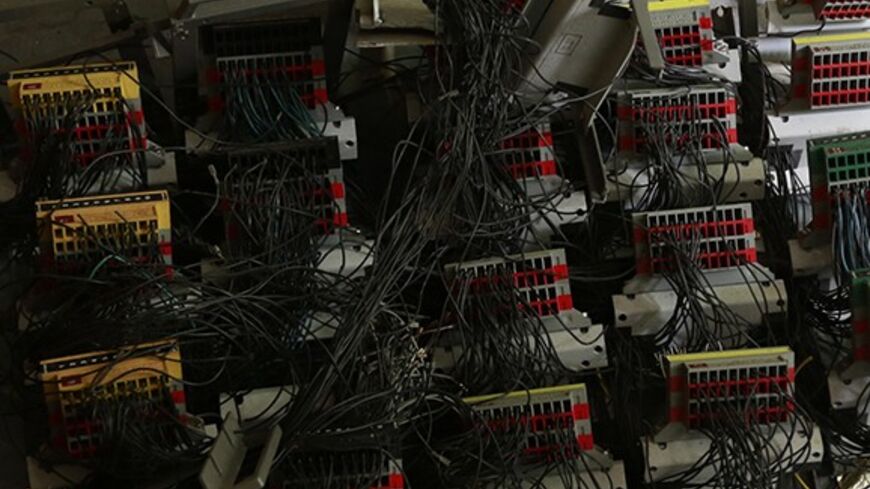 A piece of equipment is seen on the floor of a listening station. - REUTERS/Pawel Kopczynski

The recordings released by Egyptian journalist Abdel Rahim Ali about some activists and politicians — including activist Asmaa Mahfouz, the founder of the April 6 Youth Movement Ahmed Maher, Abdul Rahman Yusuf and former parliamentarian Mostafa al-Naggar — triggered a great debate in Egypt, and renewed concerns that the Mubarak police state, which used to eavesdrop on politicians and its opponents, is back.

In response to what Ali did, Naggar and Yusuf filed a lawsuit on Jan. 12 before the administrative court of the state council to cancel the TV show "Black Box," which Ali presents, and to close the TV channel Al-Qahira wal Nas.

According to the lawsuit, the program broke the media honor code and published personal secrets without prior permission from the attorney-general. Attorney-General Hisham Barakat opened an urgent inquiry about the broadcast of the recordings. He also ordered an investigation of the mobile phone company Vodafone-Egypt because the phone numbers carried by these activists were issued by this company.

The April 6 Movement began a campaign against mobile phone companies because they cooperated with the security agencies. In the past, those companies cut off communications during the Friday of Rage on Jan. 28, 2011. The mobile phone companies have denied the charges, saying that they only provide services to their customers and spy on no one.

Yusuf published a statement on his Facebook page calling these leaks “nothing new” from a state agency that is used to lying, forgery, fabrication and editing recordings to fabricate empty accusations against the Jan. 25 revolutionaries. “The entry of the masses into the main headquarters building of state security in Nasr City in March 2011 happened under the nose of our armed forces, and raising suspicions about this event indicts the army,” he added.

On another level, leaking those recordings brings to mind the practices of the former regime against dissidents by using security agencies — especially the state security apparatus and its repressive practices — to eavesdrop on regime opponents. Those practices were a cause behind the outbreak of the Jan. 25 Revolution. In 2005, Mubarak’s interior minister, Habib al-Adly, said, “The security agencies eavesdrop on [conversations] and whoever is afraid of that should just shut up.”

Many Egyptians think that the recordings were broadcast to harm the January 25 Revolution and some of its leading figures. Since at least 2008, they have have been repeatedly accused of "incitement against the regime," of treason and of receiving funding from foreign entities that seek to destabilize Egypt. Such charges kept being made after the January 25 Revolution, leading to a verdict against three of the April 6 Movement’s founders. They were sentenced to three years in prison on charges of demonstrating without a permit.

Ahmed Gharib, a member of the April 6 Movement, told Al-Monitor, “The aim of [releasing] the recordings is to discredit the revolutionaries and everything that has to do with January 25 Revolution.” He added, “We are nearing the return of the police state. But it would be worse than Mubarak’s regime because it would not only be a police state, but a military one as well.”

Gharib added, “The military state will give free rein to all security agencies to target the revolutionaries under the pretext that the [people] want stability, because [the state] believes that the [revolutionaries’] power is no longer very influential on the ground.”

For his part, Maj. Gen. Mohammad Mujahid al-Zayat, the former proxy of the General Intelligence Directorate and the head of the National Center for Middle East Studies, said in an interview with Al-Monitor that the past practices of April 6 Movement members and of revolutionary activists who stormed the Interior Ministry and the National Security headquarters created enemies who have been waiting for an opportunity to damage the activists' reputations.

Zayat disagreed that the recordings show the return of the police state, saying that the public has significant weight now and that the new draft constitution is to ban human rights abuses. Zayat was opposed to attempts to distort the images of the January 25 revolutionaries, noting that the activists were integral to the June 30 revolution.

Egyptian human rights organizations condemned the broadcasting of the recordings and asked the public prosecutor to open an urgent investigation about broadcasting those recordings. The organizations involved were the Arabic Network for Human Rights Information, the Egyptian Initiative for Personal Rights, the Egyptian Center for Economic and Social Rights, the Hisham Mubarak Law Center and a center calling for the law to be followed and practiced correctly.

Al-Monitor met with Rawda Ahmed, the director of the Legal Aid Unit for Freedom of Expression of the Arabic Network for Human Rights. She said that broadcasting the recordings of the activists is illegal and a privacy violation. “One has to get permission from a judge before recording a private call. An audio expert must confirm these recordings as genuine because Mostafa Naggar has asserted that the recordings were mostly manipulated,” she said. Ahmed also said that it is still too early to talk about the possibility of the police state returning, because the recordings were made after the January 2011 revolution and during the reign of the military council.

It should be noted that Abdul Rahim Ali announced that he is preparing more recordings to be broadcast on the same channel. Ahmed considered that this is a reflection of the crisis of the judiciary and the attorney-general because Ali is not respecting the law. Also, the state isn’t taking firm measures against lawbreakers.

It is worth mentioning that on March 29, 2011, former Interior Minister Mansour Issawi declared the end of the era of monitoring opposition forces and said that no phone call would be recorded without judicial authorization.

So it is important to shed light on the legal aspect of the matter. Al-Monitor met with Khaled Abu Bakr, an international lawyer, and he confirmed that the recordings are illegal and those who made them should be held accountable.

This matter has caused a split between those who support broadcasting the recordings on the basis that the media have the right to publish what they consider to be in the country’s interests, and those who oppose it on privacy grounds. Bakr considered it a crime even though it provides valuable information. He stressed that the source must be legitimate, and that it should apply to everyone without exception. Bakr also confirmed that the recordings fall under the penal code dealing with illegally broadcasting recordings and leaks of private citizens.

It is clear that the activists have suffered from an Egyptian version of Wikileaks, and may mark the start of an avalanche of scandals that will target many Egyptian politicians and activists in the coming period, especially because the leak of the recordings is coinciding with the third anniversary of the January 25 Revolution, and since organizations, movements and parties are insisting on breaking the law to distort the image of those with different views.