Interpol recently rejected Turkey’s request to arrest dismissed Fatah leader Mohammed Dahlan, who is currently in the United Arab Emirates, but analysts believe this will not stop Ankara from pursuing Dahlan through other means. 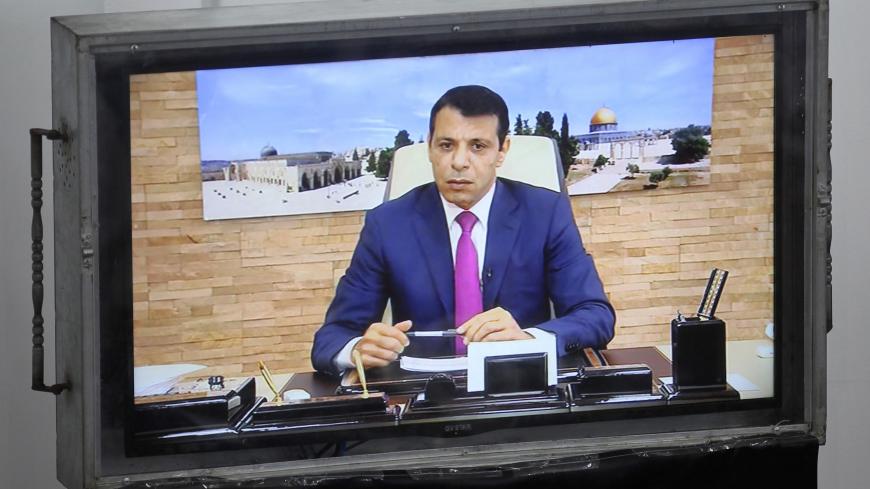 GAZA CITY, Gaza Strip — The General Secretariat of Interpol informed its National Central Bureau (NCB) in a letter published Aug. 22 of its decision to reject the Turkish request to issue an international arrest warrant (red notice) against dismissed Fatah leader Mohammed Dahlan who is currently residing in the United Arab Emirates (UAE).

The General Secretariat said Turkey’s request does not comply with Article 3 of the Interpol Constitution, which states, “It is strictly forbidden for the Organization to undertake any intervention or activities of a political, military, religious or racial character.”

The General Secretariat further confirmed that all information related to Dahlan has been deleted from Interpol's databases, and no police contact or cooperation can be made in this case through Interpol channels.

On Aug. 21, the Turkish TRT channel reported Turkey’s diffusion of a request from Interpol’s NCB in Ankara against Dahlan, accusing him of carrying out espionage activities targeting Egyptian citizens and Palestinians residing in Turkish territory.

In November 2019, Ankara had issued an Interpol red notice request for Dahlan on charges related to his involvement in issues affecting Turkey's national security.

Turkish intelligence accuses Dahlan and the UAE of being involved in the attempted coup that took place in Turkey on July 15, 2016. Dahlan challenged Ankara to present any document that supports its allegations during a TV interview last November. At the time, he accused the Turkish president of stealing gold from the Central Bank of Libya and providing a safe environment for former Islamic State leader Abu Bakr al-Baghdadi in northwestern Syrian areas controlled by Turkey.

Imad Mohsen, spokesman for the Democratic Reform Current led by Dahlan, told Al-Monitor, “Turkey is greatly disturbed by the Arab position that Dahlan adopts, as it represents an obstacle to its greedy colonial ambitions in the Arab region.”

On the Arab position adopted by Dahlan, Mohsen explained that the latter is part of the Arab alliance between Egypt, the UAE, Jordan and Saudi Arabia against any foreign interference in Arab affairs, especially from Turkey. Mohsen denounced Turkey’s false and fabricated allegations against Dahlan, which he said are not based on any legal arguments and documents.

He explained that Interpol’s categorical rejection at this time and the fact that it deleted all of Dahlan’s data from its database is a message sent not only to Turkey, but to any party wishing to cause more chaos and dissent in the Arab region by undermining Dahlan.

Mohsen noted that Turkey's failure to provide sufficient evidence shows the invalidity of its claim, pointing out that Ankara resorts only to media platforms to launch fictive accusations aimed to destabilize the region.

He said that Dahlan enjoys an extended Palestinian, Arab and international popularity. “We do not have a problem with the Turkish state and people, but with the ruling political system of a monolithic colonial nature,” he added.

Commenting on the UAE-Israeli normalization agreement, Mohsen said it is an Emirati affair and not a Palestinian affair. “The Democratic Reform Current does not interfere in how Arab countries manage their own affairs. The UAE is an independent country and does not have any ambitions in any Arab country. We issued a statement rejecting normalization [with Israel] and confirming our commitment to the 2002 Arab Peace Initiative,” he said. “Burning state flags or pictures and launching a violent attack on states will not help the Palestinians. We have to be diplomatic in expressing our positions.”

Tayseer Mohsen, political science professor at Al-Azhar University in the Gaza Strip, told Al-Monitor that the Turkish stance toward Dahlan is due to his alignment with some countries whose foreign policy conflicts with the Turkish state. Those countries see the Turkish influence in the Arab and Islamic region as a competition.

Furthermore, he indicated that the Turkish security apparatus during the past years was able to obtain files on Dahlan's involvement in acts undermining Turkish national security and indications confirming his involvement in the 2016 attempted coup. He argued that Interpol's rejection of the red notice may actually be due to lack of evidence and Turkey's inexperience in dealing with such cases, or due to the intervention of some of the powerful states (in reference to the UAE) to protect Dahlan and to prevent his trial.

“The international community is not completely fair and may be persuaded by the power of money and influence to take a biased stance,” Mohsen said.

Regarding Dahlan's position on the Emirati-Israeli agreement, he explained that Dahlan is on good terms with the UAE and will not be criticizing this agreement, ruling out any link between Turkey's request for a red notice and the agreement. “Turkey has been trying for years to get Dahlan,” he noted.

Mohsen added that ousting Dahlan from the Arab political scene would be a great relief for Turkey. He explained that getting rid of Dahlan, who is an ally of the UAE, would create an imbalance and stir political confusion in the region, which in turn would boost the influence of the Turkish-Qatari alliance at the expense of the alliance between the UAE, Saudi Arabia and Egypt.

He ruled out Dahlan’s return to the Palestinian political scene soon. Yet he noted that he would be imposed on this scene should the UAE use its influence and money to remove Palestinian President Mahmoud Abbas.

The head of the political science department at Al-Azhar University, Mukhaimer Abu Saada, told Al-Monitor that Dahlan is inciting against the Turkish president as a supporter of the Muslim Brotherhood movement, which Dahlan is against.

Pointing to the tension between the Qatari-Turkish alliance on the one hand and the alliance between Saudi Arabia, the UAE and Egypt on the other, he said, “There are several points of contention between the two alliances,” in reference to Ankara’s support for the internationally recognized government of Libya, while Abu Dhabi, Cairo and Riyadh back the rival eastern-based military strongman Khalifa Hifter. Another point of contention between those parties is Turkey’s military operation in northeastern Syria and against the Kurds in Iraq.

Abu Saada noted that Interpol's rejection of the Turkish request will not stop Turkey from pursuing Dahlan. “This may stop it from legally pursuing him, but it will not keep it from launching its incitement campaign against him.”

He added, “Turkey is trying to score irrational gains at the expense of the Palestinian cause. It is one of the first countries to recognize Israel since its establishment in 1948, and it is now criticizing and attacking the UAE for signing a normalization agreement with Israel.”

Affirming that Turkey is exploiting the Palestinian card for its internal interests and international relations, he said, “Ankara is criticizing the normalization agreement as an attempt to attract Islamic and Arab support to confront the UAE alliance.”

He continued, “Dahlan's return to the Palestinian political scene is out of the question amid the state of hostility between Dahlan and Abbas. Also, Dahlan is not able to ally with Hamas, as this would harm the movement’s relations with Turkey and Qatar. Hamas is open to coordination with Dahlan, but it cannot form an alliance with him,” since Dahlan opposes Turkey and Qatar, which are the main backers of Hamas.

Political analyst Talal Okal told Al-Monitor that Turkey's hostility to Dahlan stems from the Turkish-Emirati hostility. The UAE, Egypt and Saudi Arabia are allied against Turkey, Qatar and the Muslim Brotherhood. “As long as the Turkish role in the region continues, the battle between Turkey and Dahlan will not end,” he said.