Palestinian Authority, UAE may be ready to reconcile

Palestinian President Mahmoud Abbas is preparing to visit the UAE after years of estrangement to offer condolences for a death in the ruling family and perhaps to pursue other goals. 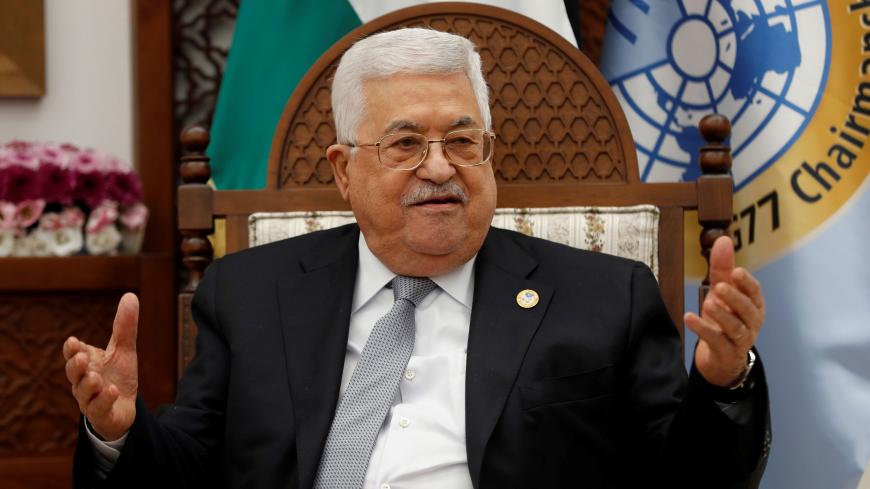 Abbas is preparing for a visit to pay his respects to Sheikh Sultan bin Zayed, a brother of the UAE rulers, who died Nov. 18. The trip would mark Abbas' first trip to the UAE since 2011. Saudi Arabia is helping organize the visit.

A former member of the PLO Executive Committee who follows up on Palestinian-Emirati relations told Al-Monitor on condition of anonymity, “The social aspect of the visit does not deny the presence of political agendas, mainly turning the page on tensions between Ramallah and Abu Dhabi, which has been sheltering Mohammed Dahlan, Abbas’ archenemy, since 2011,” when Abbas dismissed Dahlan from the Fatah party.

The source added, "Tensions rose after Abbas refused the UAE’s request in 2012 that he not seek UN membership for Palestine, [a request] based on a US suggestion. The visit might include a Palestinian request for Emirati support for the PA, which is facing a serious [financial] crisis.”

It's surprising that Abbas is preparing to visit the UAE, supposedly any day now, but with no official date announced.

In December 2014, press reports claimed the UAE was spearheading Arab efforts to ordain Dahlan instead of Abbas to head the PA. In October, Turkish Foreign Minister Mevlut Cavusoglu echoed those claims; Turkey placed Dahlan on its most-wanted list in November. Ankara is offering $700,000 for his arrest for allegedly playing a role in the 2016 failed coup.

Abbas is a pragmatic politician who changes his stances depending on political interests, and it seems that, through this visit, he wants to break free from the political isolation that the US administration is trying to impose because he rejects its proposal for Middle East peace. The unveiling of this so-called "deal of the century" has been stalled for months.

Abdullah Abdullah, a member of Fatah’s Revolutionary Council and head of the Political Commission at the Palestinian Legislative Council, told Al-Monitor, “The UAE rulers must appreciate Abbas’ scheduled visit. ... They are the ones who started the tensions, and despite that, we did not create side issues and attack them. They are sheltering Dahlan, whom they consider their agent in the region, but this harms Palestinians. Reconciliation between Abbas and Dahlan is unlikely.”

Relations between the UAE and the PA have been marked by disputes over increasing Emirati normalization with Israel, Abu Dhabi’s support for Dahlan and Emirati, Saudi and Egyptian pressure on the PA to accept the US peace plan.

In the latest Emirati-Palestinian row, Ahmad Sobh, head of the Political Commission at Fatah’s Revolutionary Council, blasted the UAE in a Nov. 25 Facebook post for opening an embassy in Guatemala, after Guatemala moved its embassy in Israel to Jerusalem in May 2018. With that move, the UAE had gone against the Arab League decision that called for boycotting Guatemala.

On April 26, Abbas’ adviser for foreign affairs and international relations Nabil Shaath accused the UAE of violating the official Arab stance and called for halting normalization with Israel. Shaath’s comment came immediately after Israel announced it would participate in the International Expo 2020 in Dubai.

A former Palestinian diplomat who lives in the UAE told Al-Monitor on condition of anonymity, “We should not exaggerate Abbas’ visit to the UAE. It has a social aspect, since he wants to offer his condolences. We don't know whether it will include meetings with UAE leaders who felt insulted when UAE Crown Prince Mohammed bin Zayed tried to broker reconciliation between Abbas and Dahlan in 2011. The deal was that Abbas would come to Abu Dhabi for the reconciliation," but they didn't reconcile. "The UAE felt humiliated as a result.”

In 2011, the UAE halted the aid it had been paying the PA — worth $2 billion since its establishment in 1994 —- but this month disbursed $12.5 million out of the $50 million it has pledged to the UN Relief and Works Agency for Palestine Refugees in the Near East.

The UAE is also supporting the Palestinian territories through Dahlan via the Takaful committee, which implements charity projects in the Gaza Strip worth millions of dollars and includes all Palestinian factions except for Abbas' Fatah. The Emirates Red Crescent and the Emirati International Humanitarian and Charity Organization also offer their services to all Palestinians in the West Bank and the Gaza Strip, and the UAE funds collective weddings in Gaza.

Emad Mohsen, official spokesperson of Fatah’s Democratic Reform Current, a new bloc headed by Dahlan, told Al-Monitor, “The UAE opened its doors to Dahlan unconditionally, and any financial support it offers stems from his brotherly ties with the sons of Sheikh Zayed, far from regional agendas. Dahlan is taking every opportunity to support reconciliation with Abbas, but Abbas’ entourage is preventing him from uniting Fatah. Therefore, we are pessimistic about this reconciliation.”

Tensions peaked between Ramallah and the UAE when the latter, in November, denied Grand Mufti of Jerusalem Sheikh Muhammad Ahmad Hussein, who is affiliated with Abbas, a visa to attend the International Islamic Fiqh (jurispudence) Academy Conference in Dubai. The incident angered Palestinians because it validated the complaints of Palestinian officials, including ministers, that they have been mistreated during their visits to the UAE to participate in international and Arab conferences.

Political science professor at An-Najah University in Nablus Abdul Sattar Qassem told Al-Monitor, “The aim of [Abbas'] visit is to ask for money, and Washington might advise the UAE to offer partial aid to the PA out of fear of its collapse. The UAE will seek reconciliation between Abbas and Dahlan to pave the way for the next legislative elections to face Hamas. But will Dahlan’s presence on Fatah’s list harm or help it, given the anger of Fatah’s organizational bases in the West Bank, despite his popularity in Gaza?”

Abbas’ visit to the UAE is expected any minute and the final arrangements are being made. Abbas has high hopes for opening a new page with the UAE, a country with huge financial resources that could save the PA’s crumbling budget due to the halted US aid and dwindling resources from Europe. The UAE also shares a united regional axis with Saudi Arabia and Egypt, which could boost Abbas’ political standing. But odds are the visit will fail to achieve his reconciliation with Dahlan, who is influential in this axis — and knows how to push Abbas’ buttons.