The latent crisis between the UAE and the Palestinian Authority emerged again recently, after an article was published quoting an Emirati leader who described the PA as a failed and a corrupt entity. 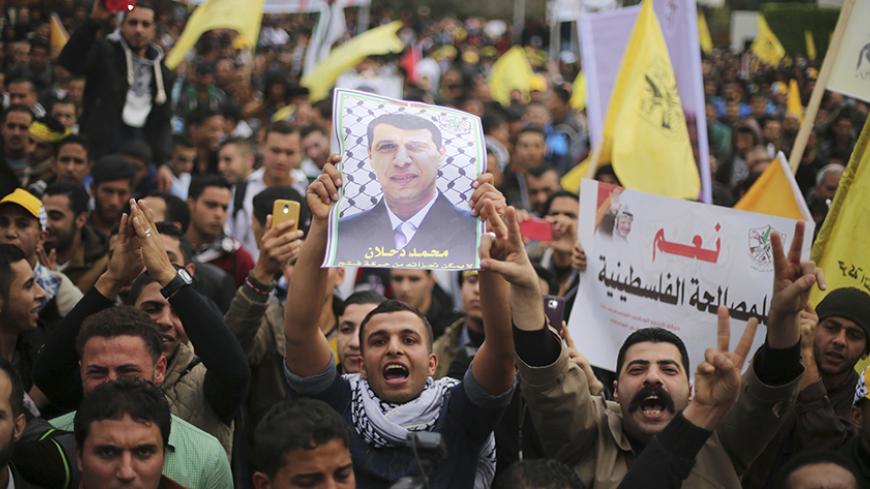 A Palestinian supporter of the former head of Fatah in Gaza, Mohammed Dahlan, holds a poster depicting Dahlan during a protest against Palestinian President Mahmoud Abbas in Gaza City, Dec. 18, 2014. - REUTERS/Mohammed Salem

RAMALLAH, West Bank — The article by Jihad al-Khazen in the London-based Al-Hayat published June 12 and titled “A Gulf Opinion on Obama and the Palestinian Cause” has provoked silent controversy between the Palestinian Authority and the United Arab Emirates. Khazen quoted a Gulf official, without mentioning who he was, saying, “The PA ought to retire because it is a mixture of failure and corruption and is unreliable.”

Khazen continued, quoting the same official, “The UAE has stopped all aid to the PA because the latter had accused it [the UAE] of money laundering through an association in the West Bank, run by former Prime Minister Salam Fayyad. The UAE demands an apology from the PA for such accusations."

The official Palestinian news agency Wafa attacked Khazen on June 14 in an article titled “Jihad al-Khazen, the eyes and ears of indecency." It reported, “The Gulf official mentioned in the article is Sheikh Mohammed bin Zayed, whom the agency [Wafa] called upon to categorically deny the statements of the [Al-Hayat] article.”

In a June 15 statement, Fatah demanded Zayed take an explicit stance on Khazen’s article in Al-Hayat, yet Zayed did not issue any response or explanation.

Meanwhile, the semi-official Palestinian newspaper Al-Hayat Al-Jadida reported June 18 on the visit of Khaled Islam, a former Palestinian official wanted for corruption, to Jerusalem to meet with Israeli officials. The newspaper said that Islam accompanied one of the Israeli officials to the Nahariya hospital to meet a former leader of Jabhat al-Nusra who is currently a leader in the Ahrar al-Sham movement.

“The UAE is well informed of Islam’s moves, especially now since he has been moving between Erbil and Abu Dhabi,” Al-Hayat Al-Jadida reported.

Islam is a close associate of former Fatah member Mohammed Dahlan. The report is an indirect reference to the Palestinian dispute regarding the good ties between Israel and the UAE, which Islam serves, and the UAE role in supporting and communicating with radical groups.

Some Palestinian officials have remained silent and refused to comment on the crisis. However, an official source in Fatah who spoke on condition of anonymity told Al-Monitor, “There are old disagreements between Palestine and the UAE, but I cannot discuss them as we do not wish to worsen the relations between the two sides.”

“This is a highly sensitive issue and we do not seek to further deteriorate relations. Thus, the PA chose to remain silent, leaving media outlets to respond,” he added.

The crisis between the PA and the UAE is not something new. It started when Fatah expelled Dahlan on June 11, 2011. Dahlan then moved to the UAE as a result of his strong ties with the ruling family, particularly Zayed, whom he serves as security consultant. In the same context, Palestinian President Mahmoud Abbas rejected UAE mediation to halt legal proceedings against Dahlan before his dismissal and to heal the rift within the Fatah movement.

The dispute gap widened when on June 15, 2015, Palestinian Attorney-General Abdul Ghani Oweiwi confiscated the funds donated to the association Palestine Tomorrow for Social Development, headed by Fayyad, based on charges of money laundering and managing funds for political purposes. This has raised the ire of the UAE, especially since most of the support to the association is provided by the UAE Red Crescent. On July 8, 2015, the Palestinian Supreme Court decided to release the funds.

Sufian Abu Zaida, a dismissed member of the Fatah Revolutionary Council and a close associate of Dahlan, told Al-Monitor, “The crisis between the UAE and the PA started when Abbas foiled the attempts by Sheikh bin Zayed to heal the rift with Dahlan. Abbas promised Zayed to halt legal actions against Dahlan, but reneged on his promises and dismissed the latter from the movement, which angered the UAE.”

Abu Zaida added, “The crisis deepened when the PA has involved the UAE in several issues, which was seen by the latter as distorting its image, especially following accusations [against the UAE] of money laundering through Fayyad’s association. The PA also involved the UAE in the issue of dismissing Yasser Abed Rabbo as secretary-general of the Palestinian Liberation Organization’s Executive Committee on June 30, 2015. The PA also fell silent on the investigative report that was published by the Lebanese Al-Akhbar newspaper on May 27, 2016, accusing the UAE and Palestinian figures such as Dahlan of buying houses and selling them to settlers in Jerusalem.”

For his part, Muwaffaq Mattar, the executive director of the Office of Information and Culture in Fatah and member of the movement’s Revolutionary Council, told Al-Monitor, “We are not concerned with any dispute with any Arab country. However, Dahlan — who serves as a security consultant in the UAE, which contributed to strengthening his ties with Egypt — has been seeking, since he sought refuge to the UAE, to stir sedition between the PA leadership and the Arab countries, namely the UAE,” by inciting against the PA.

“It is not a personal dispute between Abbas and Dahlan. We, in the Fatah movement, reject such labeling because Dahlan is wanted for murder and corruption. However, the pertinent question is how the UAE receives and supports him, knowing that he is wanted by the Palestinian judiciary,” he said.

He added, “Dahlan is doing security business within an international system [American and Israeli] to strike the PA and disturb its relations with the Arab countries, taking advantage of their concerns and fears vis-a-vis armed Islamic terrorist groups, given his security expertise in the Gaza Strip.”

For his part, Hani al-Masri, director general of the Palestinian Center for Policy Research & Strategic Studies - Masarat, told Al-Monitor, “The dispute between the PA and the UAE is not something new. However, sometimes it takes a more difficult turn. This dispute will continue to exist as long as the UAE continues to endorse Dahlan.”

He added, “The PA has to separate between the dispute with the UAE regarding Dahlan and establishing strong UAE-Palestinian relations."

It seems the dispute between the PA and UAE is likely to persist as Fatah and the PA leadership are not making amends with Dahlan, accusing him of corruption and demanding that he be brought to justice. Dahlan enjoys official UAE support and has good relations with the heads of some Arab countries, such as Egyptian President Abdel Fattah al-Sisi.