The Palestinian Authority accuses the UAE of seeking to normalize ties with Israel after the UAE sends a medical aid flight to Israel. 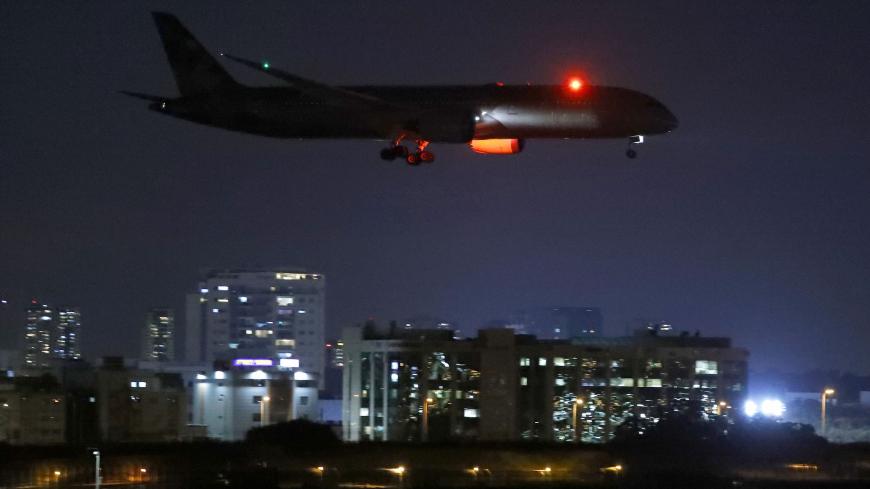 RAMALLAH, West Bank — On June 9, the United Arab Emirates delivered a medical aid cargo flight to help Palestinians curb the outbreak of COVID-19. The Palestinian Authority (PA), however, rejected the aid, just as it did with a previous aid shipment from the UAE on May 19.

An airplane of the UAE’s Etihad Airways landed at Ben Gurion Airport on June 9 through coordination with Israel, the Israeli Public Broadcasting Corporation reported, completely sidelining the PA. Although there is no peace agreement between Israel and the UAE, such flights show that their relations have advanced. The Palestinian government refused the delivery, just like it did May 19, because the aid was not coordinated with the PA.

Palestinian Prime Minister Mohamed Shtayyeh said June 9 that the UAE did not coordinate with his government about any aid that would be carried by an Emirati plane and land at Ben Gurion Airport. He told reporters, “We were not informed of this aid; we heard of it in the media.”

This was the first time that an Emirati plane had publicly landed in Israel without hiding its logo, emblem and UAE flag. The first humanitarian cargo flight that arrived in Israel on May 19 had the Etihad Airways logo and UAE flag whited out from the plane.

The UAE’s insistence on delivering aid to the Palestinians via Israel despite the PA’s rejections raises the question of why the Gulf country continues to send aid without coordinating with the PA, which perceives such attempts to be a means of normalization with Israel.

This comes at a time that Palestinian-UAE relations are not at their best. The crisis started in 2011 with Mohammed Dahlan's dismissal from the Fatah movement. Given the strong ties he enjoys with UAE Crown Prince Mohammed bin Zayed, Dahlan moved to the UAE, where he serves as security adviser to the crown prince.

PA-UAE ties further deteriorated after Palestinian President Mahmoud Abbas refused UAE mediation to resolve the Dahlan situation. The dispute escalated after  Palestinian Attorney General Abdul Ghani Oweiwi withheld funds from the Palestine Tomorrow for Social Development in June 2015 on charges of money laundering and exploiting its funds for political purposes; the foundation was led by former Prime Minister Salam Fayyad. The move angered the UAE, particularly since much of the support provided to the foundation came from the UAE Red Crescent. In July 2015, the Palestinian Supreme Court ruled against the withholding of funds.

“There is a legitimate leadership for the Palestinians. The UAE can communicate with us whenever they want to deliver aid. All of the world's countries are communicating with us,” he added.

Meanwhile, on June 12, UAE Ambassador to the United States Yousef al-Otaiba wrote an article for Yedioth Ahronoth, in a first-ever op-ed for an Israeli newspaper by a Gulf diplomat, further confirming the PA’s belief. Majdalani said, “This article is a message to the Israelis that the UAE is ready for normalization. Yet it would be a hard task in such conditions,” referring to Israeli plans to annex parts of the West Bank.

Otaiba wrote that annexation "defies the Arab — and indeed the international — consensus on the Palestinian right to self-determination." He also said the Israeli government's plan to annex areas of the West Bank may undermine efforts to normalize ties with some Arab countries, especially the UAE. Noteworthy is that Otaiba was one of three Arab ambassadors who were present when US President Donald Trump announced his Middle East peace plan in January.

Majdalani said PA-UAE relations are at a new low not because of the UAE taking in Dahlan but because "UAE policies in the region are coordinated and implemented with the US and Israel.”

Majdalani added, “The PA is keen on a unified and coherent Arab position opposing the US and Israeli project. Yet … when a position favoring us is declared in the Arab League, there is a secret stance and policy of coordination with Israel pursued under the table.”

He continued, “Those Arab countries consenting to the annexation policy and the deal of the century [US peace plan] need to publicly say it.”

Mowaffaq Matar, a member of Fatah's Revolutionary Council, told Al-Monitor, “What the UAE is doing is an attempt to normalize [ties] with Israel and bypass the Arab League resolutions that oppose any normalization with Israel before a Palestinian state is established on the occupied territories of 1967. It is also an attempt to beleaguer the Palestinian leadership in light of the occupation’s plan to annex areas of the West Bank.”

Matar added, “We reject any attempts by Arabs to normalize ties with Israel under the pretext of aiding us,” accusing the UAE of supporting Hamas in the Gaza Strip. “The UAE is well aware that the PA will reject the delivery of aid, and that it will not accept it unless it was coordinated with it. Based on that, Israel will transfer the aid to the Gaza Strip, as happened with the first aid.”

Political analyst Jihad Harb told Al-Monitor that PA-UAE relations are at their worst for several reasons, including the issue of Dahlan residing in the UAE, and the failed UAE-led reconciliation efforts between Abbas and Dahlan.

Harb said there are signs pointing toward normalization of Israeli-UAE relations, including the visits of Israel’s Culture and Sports Minister Miri Regev and Foreign Minister Israel Katz to the UAE in July 2019, in addition to the UAE taking part in the unveiling of the peace plan at the White House.

Harb said the Iran issue has pushed forward UAE-Israeli relations. He said, “Israel and the Gulf agree on the threat Iran poses, and that it consists of the main threat they should be countering in the region.”