Etihad Airways flew to Tel Aviv to bring an Israeli delegation back to Abu Dhabi for trade and tourism talks. Israel and the UAE continue to further ties after normalizing relations in September. 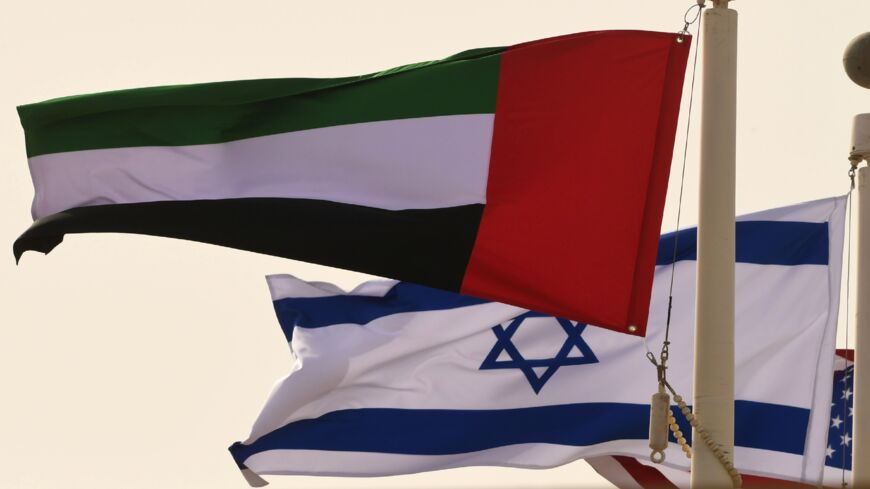 The Emirati, Israeli and US flags sway in the wind at the Abu Dhabi airport. - KARIM SAHIB/AFP via Getty Images

The first commercial plane flying from the United Arab Emirates (UAE) to Israel landed in Tel Aviv today. The Etihad Airways flight is the latest sign of strengthening ties between the two countries after their historic normalization agreement in September.

Etihad Airways flew to Israel’s Ben Gurion Airport on Monday. The Abu Dhabi-based airline flight was the first from a Gulf country to the Jewish state.

The plane departed Abu Dhabi International Airport on Monday for Tel Aviv. The same day, it brought a delegation of Israelis working in tourism and cargo back to the Emirati capital for a trade mission. They will return to Tel Aviv on Wednesday, Etihad Airways said in a press release.

“Today’s flight is a historic opportunity for the development of strong partnerships here in the UAE, and in Israel,” said Etihad’s chairman Mohamed Mubarak Fadhel Al Mazrouei. "We are just starting to explore the long-term potential of these newly forged relationships.”

Israel and the UAE agreed to establish full diplomatic relations in August and officially did so at a White House ceremony in September. The UAE’s fellow Gulf state and ally Bahrain also normalized ties with Israel at the same time. The UAE was the first Gulf country to recognize Israel, and the third in the Arab world after Egypt and Jordan.

Israeli-Emirati ties improved in recent years, in part because of shared concerns about Iran’s influence in the Middle East.

The two states have signed a series of economic agreements since the normalization. On Sunday, the finance ministries in Israel and the UAE agreed on a deal to boost bilateral investment, Reuters reported.

The Emirati cities Abu Dhabi and Dubai are major international transit hubs, and air travel is an important part of the normalization. The first commercial flight from Israel to the UAE took place in August and brought an Israeli and American delegation there.

Etihad Airways also flew to Tel Aviv in May and June to deliver COVID-19 aid to the Palestinians before the normalization deal. Palestinian officials rejected the aid, saying they were not consulted. The Palestinian Authority opposes the UAE’s deal with Israel, believing there should be no further recognition of Israel until there is an independent Palestinian state.