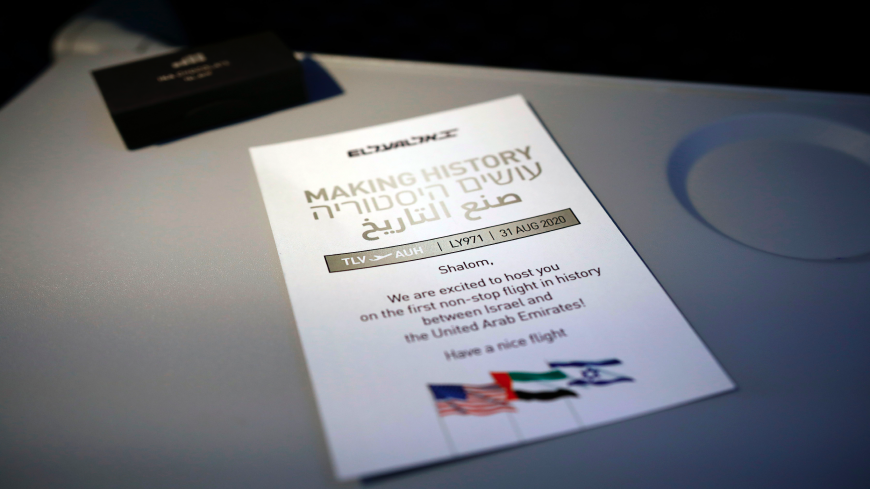 An official greeting message is seen on the Israeli carrier El Al upon its arrival at the Abu Dhabi airport in the first-ever commercial flight from Israel to the UAE, on Aug. 31, 2020. - NIR ELIAS/POOL/AFP via Getty Images

Israel and the UAE agreed to establish full relations in September. The UAE’s Gulf ally Bahrain followed soon after. Israel’s ties with the Gulf in general have improved in recent years, in part because of shared concerns about Iran’s policies in the region.

The Israel-UAE normalization agreement has quickly led to a number of air travel-related agreements between the two states. Israeli and the UAE agreed to allow their citizens to enter each other’s countries without a visa, and some Israelis have already traveled to the UAE for tourism. El Al and Abu Dhabi’s Etihad Airways also signed a memorandum of understanding pledging further cooperation on shared flights and cargo last week. The budget airline flydubai will begin daily flights to Tel Aviv this month, and Etihad will do the same in 2021.

Air travel between Israel and the UAE is significant because Israeli planes cannot fly over the many Middle Eastern states that do not recognize it. However, following normalization, Saudi Arabia announced Israeli planes can now utilize its air space. This opened up the Gulf to Israeli airliners. Bahrain and Israel also signed an air travel agreement following their normalization deal.

Like other airlines in the region, El Al has experienced financial struggles during the COVID-19 pandemic. The airline reached a bailout deal with the Israeli government in July.