In an unprecedented op-ed at the Israeli Yedioth Ahronoth newspaper, UAE Ambassador to Washington and Minister Yousef Al-Otaiba calls upon Israel to retract from its annexation plan. 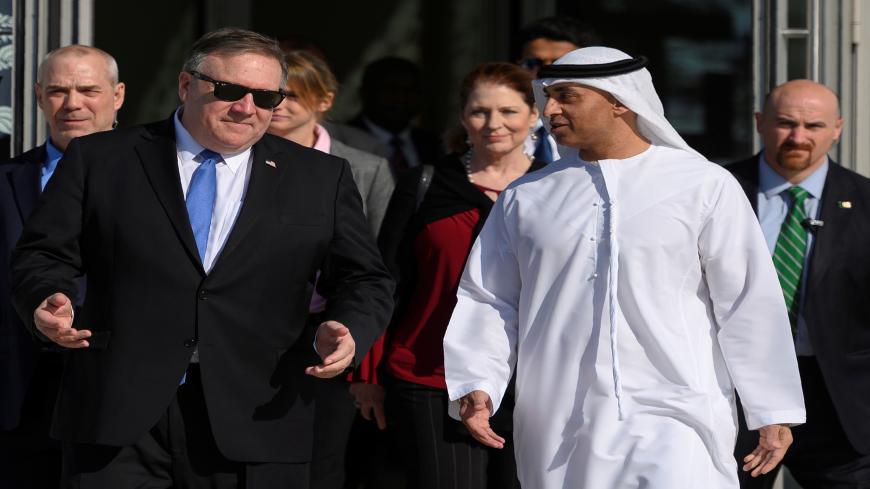 US Secretary of State Mike Pompeo speaks with the Emirati Ambassador to the US Yousef Al-Otaiba at the NYU Abu Dhabi campus in Abu Dhabi, United Arab Emirates, Jan. 13, 2019. - Andrew Caballero-Reynolds/Pool via Reuters

Israeli press dedicated its headline this morning, June 12, to an op-ed by United Arab Emirates’ Ambassador to Washington Yousef Al-Otaiba, published by the Yedioth Ahronoth newspaper. It is a rare article by a Gulf state minister to be published in Israeli mainstream media. Many Israeli pundits have since its publication retweeted the article.

In his op-ed, Otaiba warns Israel against its annexation plan, saying that such a move would destroy hopes for further rapprochement between Israel and with the Arab world. "Annexation will certainly and immediately upend Israeli aspirations for improved security, economic and cultural ties with the Arab world and with the UAE. … Annexation will also harden Arab views of Israel just when Emirati initiatives have been opening the space for cultural exchange and broader understanding of Israel and Judaism," stated the ambassador.

He then detailed openly his country’s efforts at reaching out to Israel, Israelis and Jews in general, including the invitation of Israel to participate in Dubai’s World Expo planned for next year and the ongoing presence of Israeli diplomats in Abu Dhabi at the headquarters of the United Nations International Renewable Energy Agency.

Amplifying the ambassador’s direct appeal to Israelis, UAE Foreign Ministry’s Director of Strategic Communications Hend Al-Otaiba tweeted this morning in Hebrew, stating, "We face too many shared dangers and see the huge potential for better relations. In the UAE and in much of the Arab world, we would like to believe that Israel is an opportunity, not an enemy."

Israel’s Foreign Ministry spokesperson Lior Haiat tweeted in response, "What a nice surprise reading a tweet in Hebrew. Israel has extended its hand in peace to its neighbors since its creation. … The US peace initiative is a starting point to realize this vision."

The UAE appeal to Israel is new in its boldness, but not new in essence. In a podcast published by Al-Monitor last week, Otaiba told Andrew Parasiliti that Netanyahu’s annexation plan would make the Middle East "even more unstable," adding that “it will put an incredible amount of political pressure on our friends in Jordan."

The June 12 article and the tweet appear on the backdrop of growing signs over strengthening ties between Israel and the Gulf states in general and the UAE in particular. On June 9, Israel’s Foreign Ministry announced, "An Etihad Airways plane, the UAE’s national carrier, landed in Israel’s Ben Gurion airport this evening, to deliver 15 respirators to be used in Palestinian hospitals." It was the second UEA airplane to arrive at Israel’s airport in recent weeks with medical aid for the Palestinians, and the first to feature official UAE state symbols.

Former Knesset member (Zionist Camp) Ksenia Svetlova, expert on the Arab world, was quick to react to the article. Highlighting the essence of the problem, Svetlova tweeted, "It’s either annexation or good relations with countries in the region — this is what UAE Ambassador Yousef Al-Otaiba is writing in a special article for Ynet. Obviously, even after these very clear and direct words, spokespeople of the Likud will continue blabbing about Arab states OK with annexation. The reality is that this [annexation] would deal a fatal blow to the relations created in recent years with countries in our region."