Is this the man who will replace Abbas? 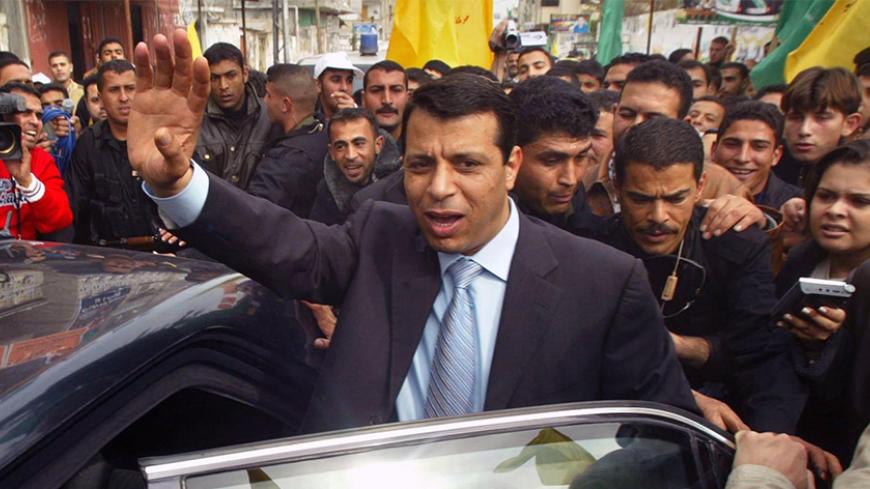 Dismissed Fatah leader and former member of Fatah’s Central Committee Mohammed Dahlan has been active on the regional and international levels in the past few months. Surprisingly, Dahlan has been more present on the regional and international scenes than any other Palestinian leader. While these activities are not directly linked to the Palestinian issue, it is important to note that Dahlan was dismissed from Fatah in 2011.

On March 13, Dahlan attended the founding conference of the opposition Ghad al-Suri (Syria's Tomorrow) movement led by Ahmad Jarba in Cairo. During the conference, the movement’s spokesman, who did not reveal his name, thanked Dahlan for his efforts in helping to solve the Syrian crisis.

On Jan. 18, the Turkish paper Gercek Hayat spoke about a multinational plan to conduct a coup against Turkish President Recep Tayyip Erdogan, presumably led by the United Arab Emirates (UAE), backed by Russia and Iran, and supervised by Dahlan.

Prior to that, on Dec. 12, 2015, Dahlan participated in a meeting held by Russian President Vladimir Putin in the Russian city of St. Petersburg for the opening of UNESCO’s World Culture Forum.

In addition, Dahlan gave a lecture Nov. 18 during a security conference held in Brussels under NATO auspices. During the lecture, Dahlan attacked the Islamic movements and accused Turkey of supporting the Islamic State.

In April 2015, Newsweek talked about the major role Dahlan played in the agreement on the Renaissance Dam project signed between Egypt, Ethiopia and Sudan in March 2015.

In this context, Abdel Hamid al-Masry, member of Fatah’s Revolutionary Council and close friend of Dahlan, told Al-Monitor, “Dahlan has a regional and international [role] in resolving some thorny issues in some countries. He has wide-range relations in the region and the world and is respected by many Arab and world leaders as he is considered a part of the regional leadership. Leaders in the Middle East assign to him [specific] missions; for instance, Egyptian President Abdel Fattah al-Sisi had assigned to him the Renaissance Dam negotiations file. Dahlan also assumed a role in bringing the Tunisian national powers together and unifying the Syrian national opposition’s discourse.”

For his part, a prominent Fatah leader told Al-Monitor on condition of anonymity, “The political regional and international activities of Dahlan are not related to the fact that he is Palestinian. Rather these activities are because he has tight relations with the UAE, which tasks him with political and security files and allows him to establish ties he couldn’t have established as a Palestinian leader only. This is following his arrival to the UAE in 2011, where he has been treated as a VIP. However, this does not necessarily allow him to assume a Palestinian leadership post, as he has been officially dismissed from the Fatah movement since 2011.”

The most important world capitals that provided Dahlan with this regional and international network are Cairo and Abu Dhabi, where Dahlan enjoys undeniable influence since he is considered the security adviser of UAE’s Crown Prince Sheikh Mohammed bin Zayed Al Nahyan. This position has provided Dahlan with influence that many UAE officials may not enjoy within the state.

Dahlan also enjoys considerable influence in Egypt through his direct ties with Sisi, which allows him to influence Egyptian media. In addition, he has been deploying efforts to buy some news websites in Jordan.

Ahmed Youssef, former political adviser to former Prime Minister Ismail Haniyeh, told Al-Monitor, “Dahlan is welcomed on the regional and international levels. As long as elections are not the only criterion on the Palestinian scene — in light of regional and international pressure to export this leader and sideline others — Dahlan may have better chances at accessing high Palestinian positions than others. This is considering Israel’s [relative] satisfaction with him and his special ties with the UAE, Egypt, Saudi Arabia, Jordan and the Syrian opposition. The international relations that a Palestinian official has may allow him to climb to rungs of the leadership ladder.”

On Jan. 16, former Israeli Deputy Foreign Minister Yossi Beilin said that he sees Dahlan as the next Palestinian president because he is pragmatic and intelligent and is prepared to replace Abbas as president.

On the other hand, Dahlan’s relations with Saudi Arabia do not seem to be at their best following the scathing comments by Saudi academics and analysts against him, accusing him of threatening the security of Saudi Arabia and attacking its religious scholars.

Dahlan may be well-aware that the most important factor for any Palestinian leader’s success is to have a network of regional and international relations that help him fulfill his ambition to become the president of the Palestinian Authority or the Fatah movement. It is worth noting that Dahlan also spends money on his supporters and followers spread across the Arab world. He does so in the Palestinian territories and among Palestinian refugees in Jordan and Lebanon through charity projects worth millions of dollars, mostly UAE money, in order to gain influence among Palestinians.

In this regard, the editor-in-chief of Jordan’s Al-Mustaqbal paper, Shaker al-Jawhari, who follows up on Dahlan’s movements, told Al-Monitor over the phone from Amman, “Dahlan has the support of regional actors like the UAE, Saudi Arabia, Egypt and Jordan. His influence even reached Lebanon and Europe thanks to the funds he is distributing to his supporters there. This makes him a strong and real competitor to Abu Mazen [Mahmoud Abbas]. As Dahlan has a presence outside the Palestinian territories, he is protected from Abu Mazen’s [criticism], knowing the latter attacks anyone who opposes him [Abbas] in Fatah.”

It is worth mentioning that many of those who have lashed out at Abbas and who live inside the Palestinian territories have faced sanctions on his orders. The sanctions include exclusion from leadership positions, cutting salaries and threatening to dismiss them from Fatah. Most recently, in February, Abbas has clashed with Abbas Zaki, a member of the Fatah Central Committee, and there was the 2014 clash with two other members of the committee, Mohamed Ghoneim and Tawfiq al-Tirawi. Thus, Dahlan has been keeping his distance from Abbas to avoid any sanctions of this sort.

Jawhari added, “These regional parties supporting Dahlan also benefit from him on the security level to confront the Muslim Brotherhood.”

Dahlan appeals to Arab countries with his fight against the Muslim Brotherhood, as this is the main concern for these Arab states that fear the Islamist influence. In September 2015, Dahlan said his hostility toward the Muslim Brotherhood dates back to 1981, when he was a student at the Islamic University of Gaza, thus presenting himself as the leader of the fight against the Brotherhood in an attempt to get closer to the capitals of political influence in the region.

Besides Dahlan’s foreign activities and international influence, his internal role is no less important. This is especially true given Hamas’ position and the long history of hostilities between the movement and Dahlan. When Dahlan was head of the Preventive Security Services in Gaza, he had hundreds of Hamas members arrested in 1995-2000 because they were involved in armed operations against Israel.

Masry said, “Hamas has a pragmatic [approach] when it comes to its relations with Dahlan despite the past hostilities. I do not think that Hamas has the final say concerning Dahlan, and it can reach with him a certain formula to preserve its own interests.”

For his part, Jawhari said, “Dahlan’s relations with Hamas are not bad, as they share a common adversary, namely Palestinian President Abbas.”

Youssef added, “Hamas considers that all options are on the table in politics and that Dahlan may be seeking Hamas’ approval so that it would not oppose him, because he [Dahlan] knows that whomever Hamas opposes, his options of winning in any upcoming elections are slim.”

Hamas might turn the page on its historic hostility toward Dahlan should it reach certain agreements with him, which is possible in the Palestinian political arena, where no alliances or hostilities are unending as common interests might push adversaries to meet halfway.

Dahlan’s chances to access high Palestinian leadership positions all the way to the presidential seat are likely to be higher should he manage to gradually gain recognition at the regional and international levels. This may contribute to his gradual success in eventually becoming the successor to Abbas despite the internal obstacles, which are reflected in the divide within Fatah about him and in Hamas’ historical hostility.