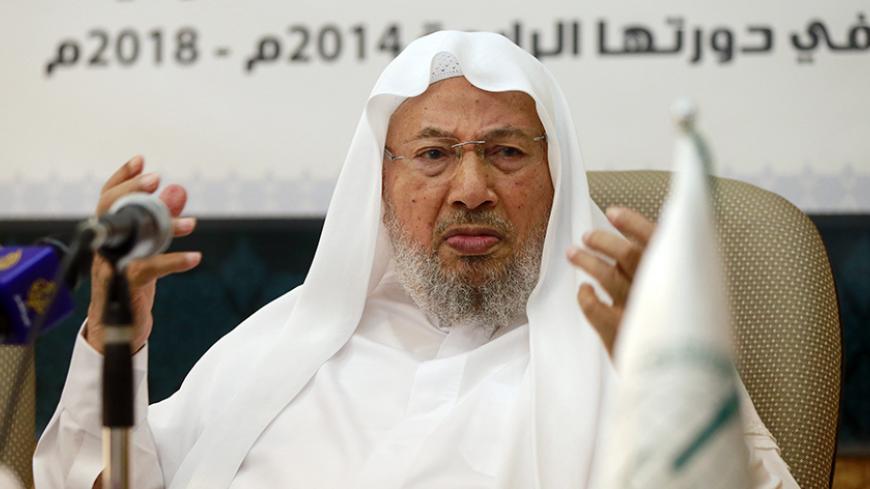 As soon as the first Palestinian intifada came to an end in 1993, Hamas embarked on a campaign of suicide bombings against Israeli targets in the cities of Jerusalem, Tel Aviv, Nahariya and Netanya, killing dozens of Israelis. The operations followed fatwas issued by Sharia scholars, most notably Sheikh Yusuf al-Qaradawi. Qaradawi, head of the International Union of Muslim Scholars, said that such operations are the greatest type of jihad and should not be considered suicide operations but heroic martyrdom.

However, the same Qatar-based Qaradawi, now one of the most prominent scholars in the Islamic world, said Nov. 24 that such operations are no longer appropriate in Palestine. He said they were previously allowed out of necessity as Palestinians had no weapons. But Palestinians now have other ways to fight.

Al-Monitor conducted interviews with Hamas officials and religious authorities. While some understood Qaradawi’s fatwa, others rejected it.

Hazem Kassem, a Hamas spokesman in Gaza, seemed reluctant to directly address Qaradawi’s fatwa. He told Al-Monitor, “Hamas adopts all forms of resistance, and the Israeli army’s possession of a large arsenal made Hamas devise new ways to protect our people, deter the occupation and complete the journey of liberating the land and the people. Hamas reserves the right to use all methods of resistance.”

Sheikh Yousef Farhat, preaching and guidance manager at Gaza's Ministry of Awqaf and Religious Affairs, told Al-Monitor, “Qaradawi is not familiar with the Palestinian reality and the continuation of the Israeli occupation. I believe he is facing political pressure. I wish he had not issued this fatwa. Hamas had decided to carry out martyrdom operations because it was forced to, given the lack of weapons to face the Israeli military force. And although Qaradawi is a respected scholar, he is not the only one who issues fatwas in the Islamic nation, as there are other scholars who firmly believe that martyrdom operations are allowed.” Farhat did not name the party he thinks may be placing pressure on Qaradawi.

There have been many fatwas allowing such operations, including those issued by Syrian Allamah Nasiruddin Albani in 2007, Egyptian scholar Abu Ishaq al-Huwaini in 2008, Mauritanian Allamah Muhammad al-Hassan al-Dido in 2013 and Saudi scholar Saleh al-Tarifi in 2015.

However, Sheikh Mustafa Shawar, head of the Palestinian Scholars League and professor of Islamic law at the University of Hebron in the West Bank, told Al-Monitor, “It is up to the fighters to take a position on Qaradawi’s fatwa. Although it could be a fatwa of merit based on a certain logic, since fatwas vary according to Sharia interpretations, the reactions that they could provoke must be taken into consideration before a tool of jihad is adopted.”

Qaradawi, the highest Sharia authority of the Muslim Brotherhood, has close ties with the leaders of Hamas, especially Khaled Meshaal, head of the movement’s political bureau. Qaradawi visited Gaza in May 2013 and was warmly welcomed by Hamas leaders. Ismail Haniyeh, deputy head of Hamas' political bureau, even kissed his hands May 9, 2013, all of which indicates the sheikh has a certain influence on the movement.

Husam Badran, a Qatar-based spokesman for Hamas and former commander of Hamas’ military wing in the northern West Bank, told Al-Monitor, “Hamas did not stop the suicide bombings against Israel. Our [decisions] are not dependent on Qaradawi’s fatwas. Rather, we consider martyrdom operations a strategic weapon for responding to the Israeli occupation's crimes, which include assassinations and massacres, and we proceed with our policy based on Sharia principles. We have a great religious legacy that allows us to carry out such operations, but these operations depend on military conditions on the ground.”

Israel showed intense interest in Qaradawi’s fatwa, probably because of his stature with Hamas.

The Israeli military's radio station claimed Nov. 25 that Turkey is behind Qaradawi’s fatwa banning Palestinian suicide bombings. Nasya Shamir, a lecturer at Israel's Bar-Ilan University, welcomed Qaradawi’s fatwa in a piece for Israel Hayom Nov. 30, while respected Israeli commentator on Arab affairs Reuven Berko wrote in the same newspaper Nov. 29 that the fatwa came because the Palestinians now have other weapons such as missiles that allow them to dispense with suicide operations against Israel.

Qaradawi’s new fatwa comes as Hamas has stopped carrying out suicide bombings against Israeli targets, but whether the movement stopped for religious reasons or for military factors remains unclear. Meanwhile, the Israeli website Walla reported in December 2015 that Israel is concerned about Hamas returning to suicide operations.

Alaa al-Remawi, a Palestinian scholar of Israeli affairs and director of Al-Quds TV in the West Bank, told Al-Monitor, “There are Israeli reports that Hamas is preparing to carry out martyrdom operations, and the Israeli lists of indictment against Hamas members in the West Bank confirm that the movement has been willing to return to carrying out these operations for three years. But security conditions in the West Bank have not been ready, although most of the Hamas religious authorities urge the implementation of such operations.”

Fawzi Barhoum, a Hamas spokesman in Gaza, told Al-Monitor, “The resistance uses its tools depending on the nature of its interests, circumstances and needs, and the practices of Hamas’ Izz ad-Din al-Qassam military wing are not arbitrary. Qaradawi’s new fatwa has nothing to do with the stopping of martyrdom operations." He went on, “Ever since its inception 29 years ago in 1987, Hamas has been using religious and Sharia references.”

Qaradawi’s new fatwa may have shaken Hamas internally, as it could deprive the movement of its Sharia justifications should it decide to return to such operations against Israel. However, the movement has not taken any public position regarding the fatwa, possibly given Qaradawi’s considerable stature.