Hamas Maintains Ties With Iran Despite Difference Over Syria

Despite a strain in ties over the Syrian crisis, Hamas is still interested in maintaining relations with Iran, Abeer Ayyoub reports. 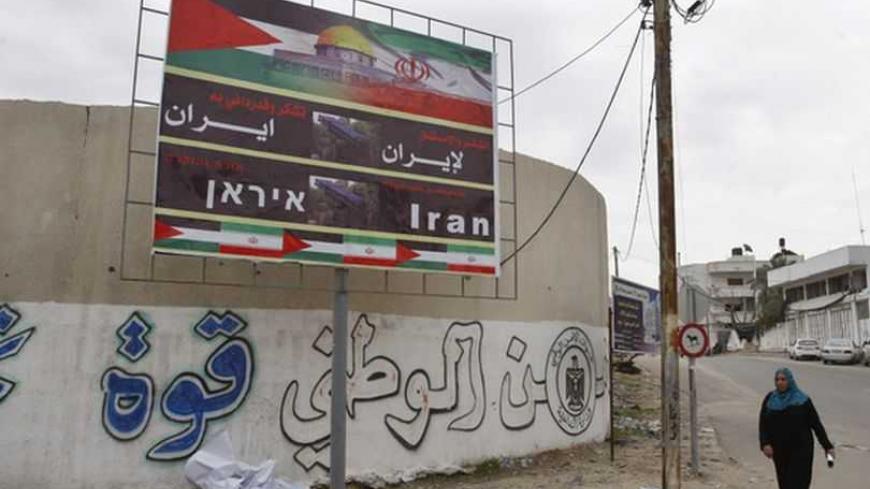 A Palestinian woman walks next to a banner that reads, "Thanks and gratitude to Iran," in Gaza City, Nov. 27, 2012. - REUTERS/Ahmed Zakot

The positive outcomes of the Arab uprisings far outweighed the negatives for Gaza’s ruling Islamists, Hamas. The revolts led to the rise of fellow Islamists in Egypt and Tunisia, allowing Hamas to open up to the regional environment.

But the ongoing uprising in Syria did not fit well for Hamas, which found itself caught between two hard options: siding with President Bashar al-Assad and thus losing popular support in other Arab countries, or showing solidarity with the Syrian people and losing Iran, Hamas' main financial backer.

Hamas had to deal with the Syrian issue delicately. It maintained a neutral stance until it completed withdrawing its exiled political leadership from Damascus at the beginning of 2012.

Though it eventually ended up on the side of the Syrian people, Hamas argues that it has still maintained good relations with Iran.

Hamas spokesman, Sami Abu Zuhri, told Al-Monitor that his faction is striving to maintain balanced relations with all Arab and Islamic powers, including Iran, which has always supported the Palestinian resistance.

“We don’t deny that our ties with Iran were negatively affected over the crisis in Syria, but we both are still interested in keeping the friendly atmosphere between us,” he explained.

Abu Zuhri stated that a senior Hamas delegation recently visited Iran to discuss joint issues, which he said was evidence of the good relations that still exist between the two sides.

Neither Hamas nor Iran were interested in completely cutting ties. Hamas wanted to keep ties with a large Islamic power like Iran, while Tehran wanted to stay beside Hamas as an Islamic armed group fighting its arch-enemy, Israel.

The dire situation in Syria was not the main reason behind Hamas reshuffling its cards. The Islamists found it more profitable to go with what it perceived as the stronger, emerging power in the Muslim Brotherhood, rather than being dragged into a long-term conflict in Syria. As an offshoot of the Brotherhood, Hamas found it a moral must to leave Syria as the Syrian chapter was a direct and opposing force of the Assad regime.

Talal Okal, a Gaza political analyst, said that Hamas, as a pragmatic movement, cannot abandon the Iran-Syria alliance altogether, but is no longer interested in being considered part of it. “Hamas has proved that it can change its allies very easily to keep itself surviving,” Okal declared.

Despite Hamas not admitting it, alternative sponsors were also additional motives for it to make the bold decision of leaving Syria and sacrificing Iranian financial and military support. Recently, Hamas has started to produce its weapons locally, while its budget continues to grow.

“Our attitude towards the Syrian revolution has nothing to do with us having other sources for funding. It’s a clear attitude that we are with the choice of the people," Abu Zuhri asserted.

The Hamas spokesman refused to discuss reports that Iran had suspended its financial aid to Hamas, insisting only that ties were slightly affected by Syria.

Hamas’ distancing from Iran has given other Palestinian armed groups the chance to get closer to the Islamic Republic, such as Islamic Jihad, but the two Islamic factions have yet to have any disagreements over ties with Iran.

Islamic Jihad, despite its relative differences with Hamas, is still cooperating with Hamas as the government ruling Gaza.

“However, Islamic Jihad is getting closer to Iran. Hamas doesn’t consider it as a big loss as long as it has its own [foreign] supporters,” said Waleed al-Mudalal, the political analyst and lecturer at the Islamic University of Gaza.

Abu Zuhri referred to Hamas relations with Islamic Jihad as steady “despite differences over new policies dealing with Iran.”

But there are signs of internal divisions within Hamas over ties with Iran, according to Okal. This seemed evident when senior Gaza-based Hamas leader Mahmoud al-Zahar visited Iran in 2012, while the exiled leader Khaled Meshaal was in Egypt trying to pave the way for better relations with the Brotherhood-ruling Egypt.

Abu Zuhri refuted such a viewpoint, however, explaining that “al-Zahar’s visit to Iran was an official visit and delegations from Hamas still go to Iran regularly.”

Despite a shift in its relations with Iran, Hamas’ ties still remain strong with Lebanon’s Iranian-backed Hezbollah, with the two factions continuing to meet on the point of resisting Israel, regardless of their different attitudes concerning the Syrian regime.

“Of course, Hamas' relationship with Hezbollah suffered as a result of differing viewpoints from those of Iran — as a common supporter of the two sides — but it did not suffer much, since the relationship wasn't strong to begin with,” al-Mudalal said.

But Hamas shouldn’t be criticized for its shifting alliances, as “there are no forever coalitions in politics,” according to al-Mudalal. “Any power in the world has to always reconsider its ties according to constant changes so it can keep surviving.”

Abeer Ayyoub graduated form the Islamic University of Gaza with a  B.A. in English literature. She is a former human rights researcher turned journalist, whose work has appeared in Al Masry Al-Youm, The Daily Mirror, and Haaretz.