Hamas is struggling to pay the salaries of government employees as revenues from smuggling tunnels have drastically dropped due to closures by Egypt. 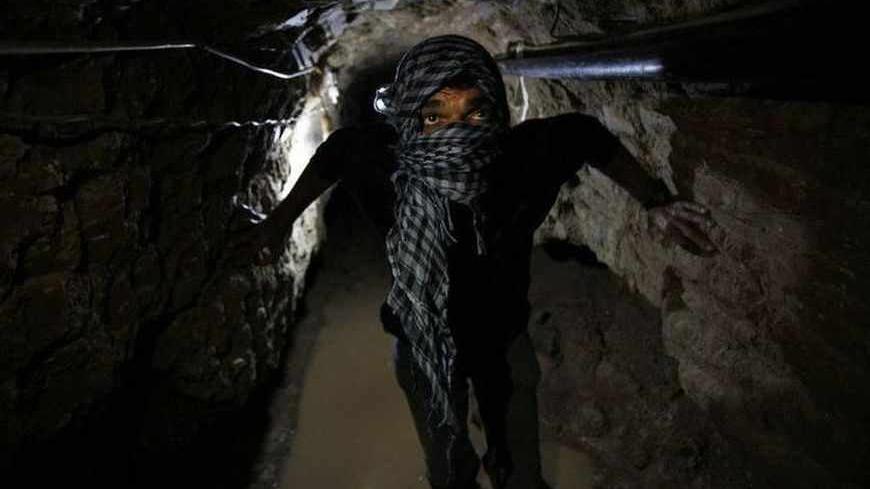 A Palestinian works inside a smuggling tunnel flooded by Egyptian forces, beneath the Egyptian-Gaza border in Rafah, in the southern Gaza Strip, Feb. 19, 2013. - REUTERS/Ibraheem Abu Mustafa

The ripple effects of the Egyptian crisis represented by the overthrow of President Mohammed Morsi and the demonstrations that followed have reached neighboring Hamas-ruled Gaza. The supply of goods smuggled from Egypt through underground tunnels has nearly come to a halt, severely exacerbating the economic hardship already being suffered by the Palestinian residents of the besieged coastal strip.

The Hamas government had come to rely heavily on the taxes and tariffs imposed on goods flowing through the crossings with Israel and the tunnels with Egypt to cover monthly costs and payments for governance, especially after the waning of international funding, especially from Iran.

The amount of goods entering Gaza through the tunnels had been equal to that coming in through the crossings with Israel. The Hamas government taxes the majority of the Egyptian products to raise revenue, while the taxes on the Israeli supplies, including basic goods, go to the government in Ramallah.

Al-Monitor secured a copy of a confidential local comparative study on goods entering Gaza through the Egyptian tunnels versus the Israeli Karam Abu Salem crossing. The study, procured from a source who preferred to remain anonymous, reveals that the majority of basic goods enters Gaza  through the tunnels, not through the crossings.

The Hamas government takes in some 30 million shekels (about $8.3 million) in the form of taxes on smuggled fuel from Egypt. In addition, the government imposes a tax of 20 shekels ($5.54) on every ton of cement. On average, 70,000 tons enter Gaza monthly.

Hamas Economy Minister Alaa al-Rafati affirmed the extent to which the Egyptian crisis had taken its toll on the Palestinian economy by disrupting major sectors because of shortages in needed imports. Rafati told Al-Monitor, “The Gaza Strip has lost around $225 million during the past month due to the halt of imports, namely, fuel and crude materials for construction, such as cement, gravel and steel.”

Rafati also noted the delicacy and human dimension of the economic situation. In June, approximately 20,000 Palestinian workers in the construction sector were laid off due to shortages of construction supplies. He commented, “There is a risk that unemployment will emerge again, which greatly affects the local purchase activity.”

Israel has imposed an economic blockade on Gaza since Hamas seized power in 2007. The siege prompted Hamas to facilitate the entry of goods through tunnels, whose activity fluctuates according to the security situation and tensions in Egypt, especially Sinai.

Hamed Jad, an economics reporter for Al-Ayyam, summed up the situation, noting, “The Egyptian political crisis has paralyzed many economic sectors in Gaza. The treasury has lost an important source of revenue.” He also explained to Al-Monitor that the annual budget of the Hamas government is vague, providing no details on revenue. Regardless the halt in commercial activity through the tunnels most certainly is affecting the budget, which is evidenced by a delay in the disbursement of salaries to government employees.

A source at the Ministry of Finance in Gaza who withheld his name told Al-Monitor that tax receipts from goods entering through the tunnels account for about 40% of the government's general revenue. Thus, as a result of the tunnel closures, the government has been forced to borrow from the National Islamic Bank in Gaza to pay the salaries of local staff.

Jad noted that an indication of the depth of the crisis with which Hamas is dealing was a recent attempt by it to collect sales taxes from local traders who import their goods through the Karam Abu Salem crossing before they have even sold the goods. The government backed down when traders vehemently opposed the move.

“The Palestinian economy in Gaza is unstable and continuously fluctuating due to neighboring security tensions, whether on the part of Egypt or Israel. This was proven true lately, when the entry of goods through Egyptian tunnels and the gas used for cooking coming from Israel came to a halt,” Jad reiterated.

When Rafati was asked about his ministry’s plans to address shortages of basic goods in case of a protracted crisis, he said, “All options are to be considered.” Alluding to the demolition of the wall separating Gaza and Egypt in 2008 and the entry of residents to north Sinai to buy goods, Rafati added, “The residents had to surpass the borders due to the suffocating blockade on Gaza.” Whether Hamas will be again pushed toward such a drastic measure is anyone's guess.