Israel briefly modified its blockade on Gaza to allow in badly needed construction material, but Gazans say it is not enough to ease the economic crisis. 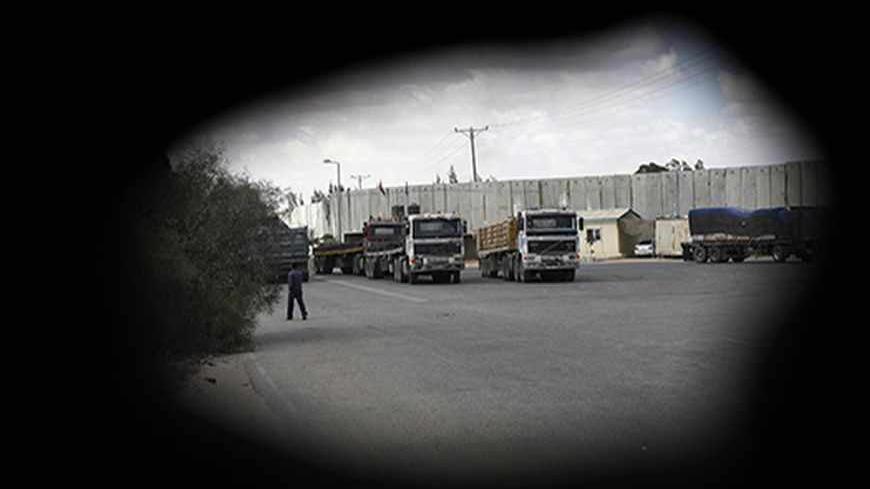 Trucks transporting construction materials are seen through a crack in a police post after entering the Gaza Strip through the Kerem Shalom crossing, Sept. 22, 2013. - REUTERS/Ibraheem Abu Mustafa

GAZA CITY, Gaza Strip — For the first time in six years, Israel has allowed building materials to enter the besieged Gaza Strip as a result of international pressure. The decision comes amid Gaza’s economic crisis following  several months of tight measures by the Egyptian army to control the smuggling of goods through the border tunnels.

On Sept. 22, the first truckloads of construction materials — including cement, reinforced steel and gravel — entered the Gaza Strip through the Kerem Shalom border crossing — the only commercial crossing between the Strip and Israel. The entry of building materials was limited to international institutions carrying out construction projects in the Gaza Strip, in the hope of addressing the dire economic situation.

“This is the first stage of the process, in addition to the quantities of construction materials brought into the Gaza Strip for projects implemented by private contractors for Arab or international organizations. These quantities are approved by the Israeli side. Israel has also approved the supply of building materials for the children's hospital project,” Fattouh said to Al-Monitor.

However, the Gaza Strip needs more than double the amount of construction materials that is currently allowed into the Strip by Israel, according to a source in the Palestinian Ministry of National Economy. The materials that have been introduced into Gaza so far meet 25%-30% of the needs of the local market.

Hatem Owaida, undersecretary of the Hamas-affiliated Ministry of National Economy in Gaza, welcomed the move to allow entry of construction materials through the Kerem Shalom border crossing to alleviate the blockade imposed on Gaza. However, he said that this is not sufficient.

“The price of cement is slightly higher compared to the prices that have been exchanged for years in the local market for Egyptian products. While one ton of cement costs 520 Israeli shekels [$147], the same quantity of Egyptian cement used to cost around 400 shekels [$113]. The price of gravel increased to a small extent, while the price of reinforced steel is very close to international prices,” Owaida said.

However, a source in the Ministry of National Economy, who spoke on the condition of anonymity, told Al-Monitor, “Israel has allowed construction materials into Gaza in light of the financial crisis plaguing the government there, which is an attempt to dry up the sources of local funding.”

“This is a clear war against Hamas by Israel and the international community, as the government in Gaza depends mostly on the tax revenues on the goods entering through the tunnels. By shutting these tunnels down and allowing construction materials to enter Gaza from Israel, Hamas will undoubtedly continue to be financially affected in the upcoming period,” the source added.

European ambassadors and consuls pressured the Israeli government to allow necessary construction materials to enter Gaza, given that the economic recession has been exacerbated by the tightening on goods transferred through tunnels between Gaza and Egypt, according to a European diplomatic source that spoke to Al-Monitor on condition of anonymity.

“The reasons behind the European pressure on Israel is the preservation of geographical unity between the West Bank and Gaza, to keep hopes pinned on the dissolution of the two territories, in addition to restoring some of the powers of the PA and meeting the needs of Palestinians in Gaza,” the European source said.

“The Israeli approval on allowing construction materials to enter comes to bolster the power of Hamas so as to prevent its rule in Gaza from falling. It is also an attempt to drain its financial sources to a minimum to prevent a military escalation against Israel at the hand of military wings affiliated with Palestinian factions,” the source added.

Hamed Jad, an economic reporter for the daily Al-Ayyam, told Al-Monitor that the construction materials that are allowed into Gaza do not change much about the dire economic situation. These materials can only slightly revitalize the economy, since Gaza needs three times more than the materials allowed in.

“This is a very important move and constitutes a shift in the equation of the blockade imposed on Gaza. The demand will be high while the supply will be limited, given the allowed quantities and the need of the local market, especially since construction activities have been stopped for the past three months,” Jad noted.

The Hamas government is struggling with a severe financial crisis since the grip on the transfer of goods through the tunnels was tightened. Nearly 40% of the government’s budget relies on taxes imposed on Egyptian goods, leading the government to take out loans from local banks to pay the salaries of its employees.

An informed source in the Ministry of Finance who requested anonymity explained to Al-Monitor that the government might impose taxes on construction materials coming from Israel. The source noted that while the current economic situation may delay such a decision, these steps will later be discussed with private companies importing construction materials.

The importation of Israeli goods as a replacement for Egyptian goods may barely keep Hamas afloat in Gaza, while clipping its financial wings and leaving it beholden to a political solution to relieve it of its crisis, potentially by offering political concessions to its West Bank rival, Fatah.