Israel has slightly loosened the noose on Gaza in response to Egypt's renewed blockade on the Hamas-ruled enclave. 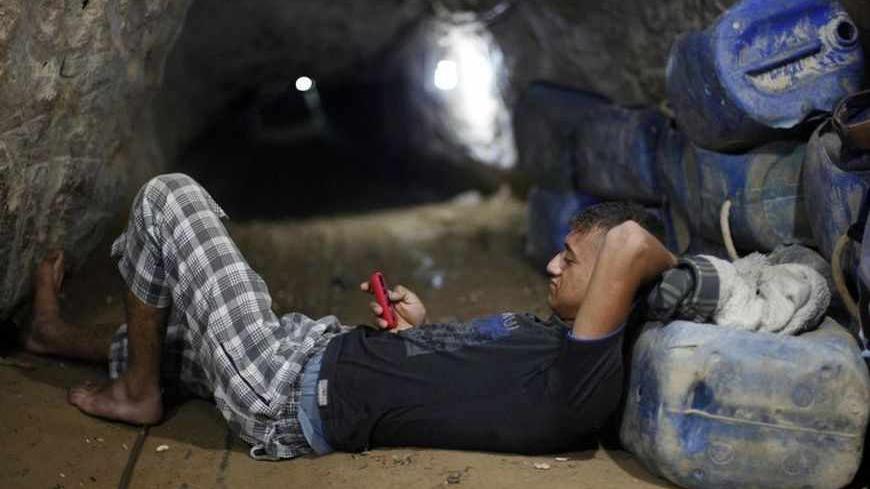 A Palestinian tunnel worker uses his mobile as he rests inside a smuggling tunnel beneath the Gaza-Egypt border in the southern Gaza Strip, July 19, 2013. - REUTERS/Ibraheem Abu Mustafa

Many kinds of Israeli and European chocolate, biscuits and dairy products, all imported through Israeli companies, fill the shelves of the famous supermarket in al-Rammal, Gaza City. But that supermarket is not alone. A few meters away, a small grocery store is also filled with the same products. But Egyptian goods, which some time ago filled most of the shelf space, are missing.

Nasser al-Helou, a Gazan merchant, told Al-Monitor that a lot of imports now come from Israel and the West Bank. “Most goods now enter through the official Karam Abu Salem crossing after the [smuggling] tunnels were destroyed. The import quantities, especially goods that we had trouble importing because of cheaper alternatives in Egypt, have increased since about June. ... The goods that are the most in demand are milk, mineral water and cheese. But the consumers’ purchasing power is now weak because of the political situation.” He predicted that after mid-September, Gaza homes will have even more Israeli goods.

Karam Abu Salem is the only commercial crossing allowed by Israel after the closure of three major crossings: Sufa, Nahal Oz and Karni.

The general director of crossings, Nazmi Muhanna, told Al-Monitor over the phone from the West Bank that Israeli authorities allow approximately 500 commercial trucks to enter per day. But now, the coordination is for about half that quantity because the traders are requesting less than the maximum amount allowed.

“This crossing has the ability to meet the needs of the people of Gaza if it operates at full capacity,” he said, adding that they requested that Israel provide the Strip with all its needs and work to eliminate the list of banned goods.

The tunnels are only functioning at 30% of their operational capacity, according to Raed Fattouh, president of the coordination committee for the entry of goods to Gaza. This is “forcing traders to buy large quantities of goods from Israel and the West Bank. [Those quantities] peaked in June, especially after the Hamas government announced its intention to impose a new tax. So there are large stored quantities and that is affecting the number of trucks that are currently being coordinated. But this number is expected to increase several fold over the next couple of months,” he told Al-Monitor at his office.

Fattouh said that after the incident of the Turkish Marmara ship in May 2010, 70% of the required goods have started entering the Gaza Strip via Karam Abu Salem. Before that, it used to be 10%.

Israel has kept the commercial crossing open despite its blockade on Gaza since 2007, Fattouh said, adding this is a result of “great international and Arab pressure on Israel.”

“That pressure will increase if the blockade is comprehensive. Israel is concerned with [maintaining] its humanitarian [reputation] to [protect] its policy from the world’s [attention]. ... We asked the Israelis to keep the Karam Abu Salem crossing open till 10 p.m. instead of 3 p.m. to alleviate the [people’s] suffering. There are promises that there will be changes in the next 20 days,” he said.

Government spokesman Ihab al-Ghussein agreed, but called Israel’s policy at the Karam Abu Salem crossing a “slow killing,” adding that “the Israelis don’t want to put Gaza under a harsh siege for fear it will explode on them.”

“Most goods that enter Gaza through the commercial crossing with Israel fill only 20% of [Gaza’s] needs because they are luxury items,” he told Al-Monitor.

At the end of July, after the number of travelers to Gaza increased, Palestinian Authority President Mahmoud Abbas called for re-working the 2005 crossings agreement, which specified that the Rafah crossing was for travelers and the Karam Abu Salem crossing for goods, subject to the presence of European observers, and under Israeli monitoring by CCTV.

Hamas spokesman Fawzi Barhoum rejected this proposal on his Facebook page. “[Abbas], unfortunately, is insisting on bringing back the Europeans’ and the occupation’s intelligence services to work at the Rafah crossing and to control its traffic under the 2005 agreement, which has caused suffering for 2 million Palestinians in Gaza. [Abbas] is also formally requesting to continue the destruction of the tunnels and he refuses to establish a free trade zone. ... Is this the role of the president of the Palestinian people?”

Despite the severe financial crisis and fuel shortage caused by the destruction of the tunnels, one beneficiary has been Gaza’s wheat mills, which have been revived due to the absence of flour imports from Egypt.

“The mills have returned to work since June 30 for the first time since the 2011 [Egyptian] revolution, when all goods were allowed to be imported through the tunnels without tax. ... A ton of wheat from Israel costs about $80 more than one from Egypt, even though both are fine Russian wheat. But Egyptian [wheat] is not associated with costs for transportation, gas, electricity or taxes,” Sabri Abu Ghali, the owner of Abu Houli Mills, told Al-Monitor. Despite that, Abu Ghali asserted that the price of bread has not risen, “at least till now,” he added with a smile.

He explained that seven mills, employing 250 workers, are back in operation, pointing out that for the first time in three years there is a flour stock worth 45 days in Gaza.

But the negatives so far outweigh the positives, according to economic analyst Hamid Jad. “Egyptian goods are cheaper but of lower quality because the Israeli ministries of agriculture and health oversee the goods destined for the Gaza Strip, unlike the goods that come from the tunnels. The latter arrive in bad condition,” he told Al-Monitor.

Jad warned that rising prices of goods imported from Israel and the West Bank are affecting consumers in Gaza. He also noted that many tunnel traders and workers are out of business, and so are transportation workers, as well as workers in factories of construction materials such as cement and iron, after those materials stopped coming through Egypt. Israel bans such material from passing through the Karam Abu Salem crossing.