Amid crackdown, tunnel smuggling is risky business in Gaza

As the Egyptian army intensifies its campaign to destroy the border tunnels from southern Gaza, many still rely on smuggling goods for work, as no better jobs are available. 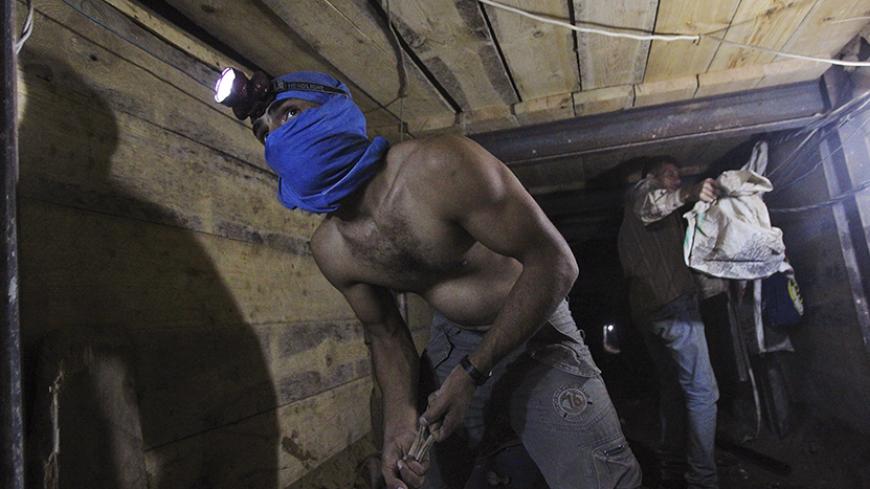 Tunnel workers work inside a smuggling tunnel dug beneath the Gaza-Egypt border in the southern Gaza Strip, Oct. 8, 2013. - REUTERS/Ahmed Zakot

RAFAH, Gaza Strip — Since former Egyptian President Mohammed Morsi was ousted in June 2013, the Egyptian military has been trying to eliminate the smuggling tunnels beneath the border in the southern Gaza Strip, destroying them and expanding the buffer zone.

Some of these tunnels are still functioning — cautiously, given the enormous risks such as the eroding soil inside the structures, the strict surveillance on smugglers and the gas bombs used against them. These tunnels remain the only way to bring goods into Gaza that are banned by Israel from entering through Gaza’s only commercial crossing, the Kerem Shalom crossing. Tunnel smuggling is also a way to evade new taxes imposed by Hamas on goods imported through Kerem Shalom.

Al-Monitor’s correspondent in Rafah met with a tunnel merchant nicknamed Abu Raed. He owns a tunnel used to smuggle goods across the border with Egypt. He said, “Gaza still needs more tunnels, as most of them were destroyed.”

Abu Raed told Al-Monitor he smuggles goods banned by Israel and subject to high taxes by Hamas, adding that he smuggles Egyptian cigarettes “given their low price and the absence of tobacco factories in Gaza. Cigarettes are imported from the West Bank, and Hamas imposes a 17% tax. Gaza also imports foreign tobacco, on which Hamas also imposes a high tax.”

Abu Raed said, “Work in tunnels has become more complicated [by the crackdown, so] we are mostly smuggling expensive, lightweight goods in high demand in Gaza.”

Abu Raed said, “We are smuggling spare parts for motorcycles, the importation of which is banned by Israel, as well as soldering irons, which are banned for security reasons. While soldering irons are used by blacksmiths to manufacture doors, they can also be used by the resistance in the local rocket industry, as Israel claims.”

He said that they also smuggle “refrigerator motors, computer speakers and tools such as electric drills, whose price reaches up to $1,000 in the Gaza Strip, since they is rare; while we can bring them from Egypt for $380.” He went on, “Despite the difficulties, we are still smuggling multiple types of chemicals, whose entry through the Kerem Shalom crossing Israel bans, including fiberglass, which fishermen use to repair small boats that are constantly under Israeli attacks."

Although Abu Raed has breathing problems from the dust inside the tunnels, he is forced to work in them to provide for his family, as no alternatives are available in Gaza's high unemployment rate.

The smuggling process has become risky, according to a man who works with Abu Raed and asked to be identified only as "Mohammed."

He said, “The Egyptian army is firmly and brutally dealing with the tunnels issue. It may shoot directly at workers, as happened in the past when a worker was injured in an ambush set by the Egyptian army. We feel constantly threatened while working, as armored vehicles drive above us. … This may affect the soil inside the tunnels. We could die at any moment.”

Mohammed, who studied accounting, said that tunnel smuggling is the only job available for him. He believes that there is less risk of the tunnels collapsing than of dying at the hands of the Egyptian military. He explained that the “Egyptian army fires tear gas or throws wastewater [inside the tunnels], where oxygen is rare, making death inevitable. The risk of a tunnel collapse is lower.”

Seven tunnel workers were rescued by the civil defense in Gaza on the morning of May 7 after being reported missing in a partially collapsed tunnel that was destroyed by the Egyptian military. The Egyptian media is still buzzing about further destruction of tunnels on the border with Gaza.

Abu Raed said the buffer zone that the Egyptian military is working to expand is of more than 1.5 kilometers (0.9 miles) long.

The smuggling of goods from Cairo to Rafah is getting creative, including the transfer of licensed merchandise from warehouses in Cairo to warehouses in the Sinai Peninsula not yet destroyed.

Since Morsi's ouster, the tunnel economy has declined as the Egyptian military destroyed more than 80% of the tunnels. The Israeli Kerem Shalom crossing remained the only entry point, but does not meet all of Gaza's needs.

The spokesman for the Hamas-run Ministry of National Economy, Tariq Labad, told Al-Monitor, “The goods entering through the Kerem Shalom crossing do not represent a third of Gaza’s daily needs. An average of 300 to a maximum of 700 trucks enter every day. They carry some construction materials, while Gaza needs 1,600 trucks' worth per day.”

Labad said, “The Kerem Shalom crossing is relatively small and is not enough for the entry of all of Gaza’s needs. … The Israeli army drew up a list of banned materials, such as long wooden boards, plumbing pipes and iron, whose entry is banned.” He added that Israel provides “false excuses [for the ban] of these materials, of which the people are in dire need, such as the claim that these materials are used for military purposes.”

Despite the risks, Gazans still depend on the border tunnels. The tunnel workers' plight will continue unless a political breakthrough is made with Israel and Egypt to change the dire conditions Gaza has suffered since the siege began in 2007.