The tunnels used for smuggling goods between Gaza and Egypt are still operating despite the dangers posed by the Egyptian army’s campaign to destroy them. 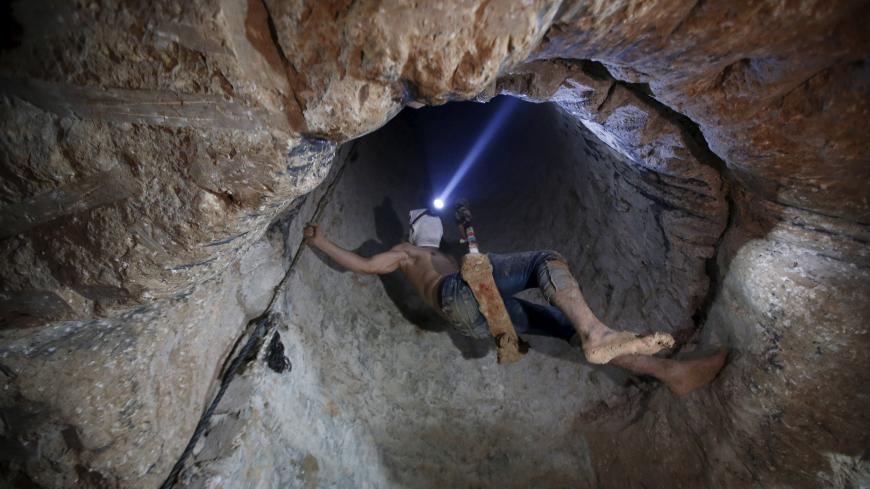 A Palestinian worker is lowered on a rope into a smuggling tunnel that was flooded by Egyptian security forces beneath the border between Egypt and the southern Gaza Strip, Nov. 2, 2015. - REUTERS/Mohammed Salem

RAFAH, Gaza Strip — On July 3, nine Palestinian workers were trapped after the Egyptian army destroyed a tunnel used for smuggling commercial goods under the border between the Gaza Strip and Egypt. After several hours of no contact, the workers were eventually found and rescued.

Neither the Egyptian nor the Palestinian authorities gave further details about the incident, but the Egyptian army is still waging a campaign against the tunnels on the border with Gaza, which it believes are used as smuggling routes for weapons and terrorists to and from Sinai.

Although Hamas’ Ministry of Interior established a buffer zone on the border with Egypt in June 2017 in the framework of joint security coordination between the movement and Egypt, smugglers have continued to operate from Gaza. The tunnels represent a lifeline for food and medical supplies to the Gaza Strip, which has been under siege since 2006.

Ismail (a pseudonym), who works in a commercial tunnel on the Gazan-Egyptian border, told Al-Monitor, “Border tunnels are still needed to get certain materials that Israel does not allow through the Kerem Shalom crossing, the only effective commercial crossing.”

On July 9, Israel issued a decision to impose further sanctions on Hamas in Gaza by closing the Kerem Shalom crossing and reducing the fishing area from 9 to 6 miles, in response to fire kites protesters launched from Gaza into Israel.

Ismail explained how the tunnels are operated, saying, “After the Egyptian army heavily mobilized on the border, we extended the tunnel by an average of 3 kilometers [nearly 2 miles] so it goes behind the Egyptian army’s focal points.”

Ismail went on, “We are smuggling cigarettes, some types of medical supplies, motorcycles and their spare parts and other spare parts for various kinds of machines whose entry via the commercial crossing Israel prevents. For instance, some cosmetic medicines are sold in Egypt at a low price, compared with that of exported Israeli ones. We smuggle such goods at the request of medical companies from Gaza.”

Ismail and his fellow workers barely survived when the Egyptian army uncovered the tunnel they used for smuggling in June. “The Egyptian army pumped a large quantity of water in for 10 hours straight. If it weren’t for the new tunnel openings we would have died under the water pressure, since we could barely keep our heads above water,” he said. Workers were able to drain the tunnel, built in 2006 of concrete, for reuse.

He said, “Since 2013, the Egyptian army has arrested many Palestinian workers, some of whom appeared in court in Egypt and others still remain behind bars pending trial.”

When Egyptian President Mohammed Morsi was ousted in 2013, Hamas lost crucial support from the Muslim Brotherhood, to which Morsi is affiliated. The movement suffered further under economic restrictions imposed by the Palestinian Authority since April 2017.

The smugglers face trouble on the other side as well. “The border is no longer the same. The Hamas government is carefully monitoring it more than ever. In the past, many more tunnels were operating, smuggling was booming and there was no buffer zone to expose our movements. However, today the Ministry of Interior has erected tents all around the border. Each tent has a committee responsible for searching the goods entering the tunnels, allowing workers through and collecting taxes,” Ismail said.

He added, “In order to avoid paying taxes to Hamas, which have reached 100% on a pack of cigarettes, we have to dig tunnels inward toward the Palestinian city of Rafah to avoid inspection points. But other traders have extended tunnels inside the city to smuggle more prohibited goods.”

Since 2013, the Egyptian army has been conducting a violent crackdown against militant groups in North Sinai, including the Egyptian branch of the Islamic State, which the army believes to be responsible for a large number of bloody attacks in Egypt.

Ismail noted that some individuals from the Gaza Strip have passed through the tunnels to join IS in Sinai. Most recently, 15 people headed toward Sinai during Ramadan through the tunnel, he said. “Some individuals in Gaza who were already in contact with IS in Sinai made it through. Joining the group became their life goal after losing hope under the living conditions in Gaza,” he said.

In January, the Ministry of Interior in Gaza published the confessions of two IS members it arrested upon their return from Sinai to Gaza. The two suspects revealed how IS intercepts equipment and goods in the tunnels.

Mohammed (another pseudonym), a tunnel worker from Khan Yunis in the southern Gaza Strip, told Al-Monitor, “Our work has become harder and more dangerous since tunnels increased in length. In exchange, tunnel owners and traders — some whom are affiliated with political parties — only pay us 100 shekels [$28.50] per day. Back when the tunnels were booming before President Morsi was toppled in 2013, we used to get paid a daily average of $120.”

Economist Mazen al-Ajlah told Al-Monitor, “The tunnels are an important source of government taxes in Gaza, particularly thanks to taxes imposed on cigarettes and shisha tobacco, for which demand keeps growing since only certain types enter from the Israeli side and in small quantities.”

“If the Israeli side [keeps Kerem Shalom closed] for long, it would take us back to the beginning of the blockade in 2007. It will lead to a shortage of supply and an increased demand on goods,” Ajlah said.

However, he added, the small number of tunnels are not enough to meet all of Gaza's needs, especially if goods can no longer enter through Rafah's Saladin Gate, which the Egyptian army opens intermittently.