Traders in Gaza criticized the recent government decision forcing them not to raise prices of goods despite a looming crisis of shortages, as the besieged enclave mainly imports its needs from Ukraine, where Russia has launched a war. 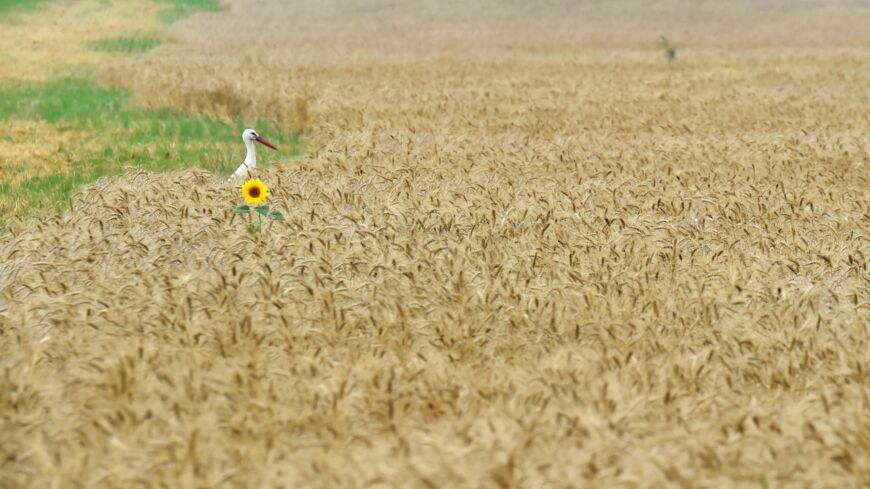 A stork stands next to a sunflower in a wheat field near the village of Mala Dyvitsya, some 160 kilometers from the Ukrainian capital, Kyiv, on July 27, 2015. - SERGEI SUPINSKY/AFP via Getty Images

Before the first Russian military wheel started turning toward Ukraine, the world feared the repercussions of such a war, especially considering that the two conflicting countries are among the top food and industrial exporters in the world.

As soon as Russia issued a threat against Ukraine, an array of countries started to examine the repercussions that such a war would have on them, especially economically.

The Gaza Strip, a small enclave already ailing from the Israeli blockade and Palestinian division, is among those affected by this war raging at a distance of about 2,000 kilometers (1,242 miles). Many of the products in the Gaza markets are either imported from Ukraine or Russia, especially flour.

Osama Nofal, director-general at the Ministry of National Economy in Gaza, said in a press statement Feb. 27 that there is no need to worry about basic commodities imported from Russia and Ukraine, as there is enough wheat for three months.

Nofal warned merchants against raising the prices of wheat, flour or other commodities, saying traders who do so would be referred to the Public Prosecution and the judiciary.

He added that the ministry’s consumer protection teams will be conducting inspection tours to ensure that traders are not manipulating prices.

Some merchants dismissed the decision as unfair.

Abdel Dayem Awad, general manager of Al Salam Mills in Gaza, which imports Russian and Ukrainian wheat and is the largest mill company in Palestine, told Al-Monitor, “Our stockpile is only enough for one month, and if the war continues, we may resort to other countries. But this requires raising wheat prices and import costs, as Russian and Ukrainian wheat is cheaper than others.”

Awad explained that Gazan society relies on Egyptian flour and flour that the UNRWA distributes to the refugees, but it does not rely on Palestinian mills.

“Therefore, the Ministry of Economy should have promoted local flour, especially in light of this crisis, instead of asking us to create a strategic stockpile that is locally not relied upon anyway,” he added.

“The local flour is of better quality, but its high price is due to the high taxes. This is why we resorted to importing and competing for UNRWA tenders. We have contracts with [the UNRWA] and the World Food Program. In light of the crisis, we cannot sell our imported flour to bakeries and factories, which prefer Egyptian flour. This is why I refused the Ministry of Economy’s request to import wheat and sell it to bakeries,” Awad said.

“It is only normal for merchants to raise prices, as we are buying at high prices while paying high taxes. Today, due to the Ukrainian crisis and the rise in international prices, many companies have stopped importing and they have no stock, such as Al-Eman Mills, the Palestinian Flour Mills, the Abu Taha Mills and Al-Huda Mills,” Awad added.

According to 2019 statistics by the Observatory of Economic Complexity, Russia and Ukraine alone export a quarter of the world’s need of wheat, as Russia ranks first in the list of wheat exporters with a value of $8.1 billion, while Ukraine ranks fifth with a value of $3.1 billion.

Ahmed al-Kafarneh, owner of Al-Gharbal Company, concurred with Awad. He told Al-Monitor that his company imports foodstuffs from Ukraine and Russia.

“We currently do not have a stock of Ukrainian and Russian products, and with the global increase in commodity prices, we had to reduce import quantities in order to curb losses. If the war continues, we will have to go to alternative markets such as Spain, Turkey, China, Egypt and Israel. But since Russian and Ukrainian goods are the cheapest, any alternative would infer higher prices.”

Kafarneh explained that he imports cheese, oils, flour and soft drinks from Russia and Ukraine, and that there are other companies in Gaza that import from these two countries, such Abu Merei, Samir & Raed Hamada and Al-Safi.

He said that sanctions on Russia will negatively affect the Palestinian economy, because "[Russia] is one of our top suppliers" and all imports take place through Israel, which incurs additional costs for merchants.

Kafarneh said that other options remain expensive. “I recently contacted Egyptian companies to import goods and was surprised that each ton of any commodity now costs $200 more, apparently due to the increase in prices of raw materials and global fuel prices, of which Russia is one of the most prominent producers."

This comes at a time when Egypt informed Palestinian officials of its decision to raise the price of fuel and fuel derivatives entering the Gaza Strip from Egypt by 10% to 15% as of March. Gaza relies on Egypt for 70% of its fuel needs and 80% of its cooking gas needs.

Omar Shaaban, founder and director of Pal-Think for Strategic Studies, told Al-Monitor, “The impact of the Ukrainian crisis on Palestine will be felt at three different levels. The first is political, as the Middle East no longer occupies center stage in world politics, and this means that reports about the Palestinian cause will decline. The second is economic due to Palestine’s reliance on Russia and Ukraine as a source of goods. And the third is related to the international funding that will go to Ukraine if the war drags on, and this would mean that the budget earmarked for supporting the Palestinian Authority and Palestinians will decrease.”

Samir Abu Mudallalah, an economics professor at Al-Azhar University, told Al-Monitor, “Eighty percent of the Palestinian foreign trade is with Israel, while the other 20% is conducted through Israel as well. Therefore, the Palestinian economy is affected by the repercussions on the Israeli economy and by all goods that are imported and that will rise globally. This is especially true as Russia is the world’s top exporter of wheat and Ukraine the fifth, and this will affect the Palestinians, especially the poor.”

Abu Mudallalah added, “The Palestinians won’t be able to escape the inflation expected to result from the war between Russia and Ukraine amid limited alternatives exemplified by Israel or Egypt, both of which will be affected and subsequently affect Palestine. However, it remains possible to mitigate the crisis through the implementation of the agreements signed between the Palestinian Authority and European countries and stalled because of Israel.”

He explained that Palestinian imports amount approximately to $6 billion annually, while its exports do not exceed $1.2 billion. He said companies importing from Russia and Ukraine will incur heavy losses if the crisis between the two countries lingers.

Moeen Rajab, a professor of economics at Al-Azhar University, told Al-Monitor, “Russia and Ukraine are rich in natural resources and agricultural crops. In case the war drags on, there will be a deficit in the global supply of goods, which will lead to a global increase in prices.”

“The negative repercussions are thus far still limited, and if the war expands, we will witness a rise in prices, in which case our merchants will reach out to other countries to find an alternative to crisis-ridden Ukraine,” Rajab added.

He said that in light of the siege and the wars witnessed in the Gaza Strip, the enclave should have no less than three months' worth of food stockpiles. He called on authorities to continue monitoring prices and make sure traders do not raise them.