Ukraine calls on Egypt to support it, abandon neutrality

Ruslan Nechai, charge d'affairs of Kyiv's embassy in Cairo, calls on Egypt and countries in the region to support it with weapons, fuel and financial and humanitarian aid, and abandon the position of "neutrality" regarding the Russian invasion. 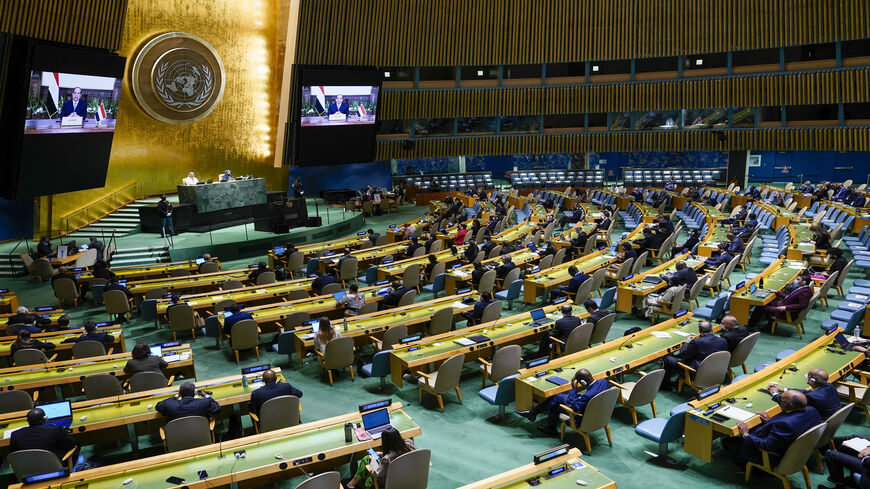 Ukraine is calling on its trade partners to support it with weapons, fuel and financial and humanitarian assistance, and to abandon their neutral position toward the Russian invasion.

Ukrainian Charge d’Affaires in Egypt Ruslan Nechai noted in a press conference Feb. 28 that his country had sent a memorandum to the Arab League asking it to take its side against Russia.

In an exclusive interview with Al-Monitor, Nechai said, "Egypt's commercial and economic interests with Ukraine and Russia will be threatened and disrupted if the war waged by the Kremlin is not ended. Egypt and Ukraine have long-standing relations in terms of food security. Egypt imports wheat, corn and sunflower seed oil from Ukraine. As we speak, cargoes can no longer be transported via the Black Sea, which catapulted prices of imported materials to unprecedented levels. The price of a ton of wheat almost doubled from $230 to $450.”

He noted, “Vessel insurance companies also raised their prices. Moreover, cooperation in the field of tourism will take a bad hit. In 2021, around 1.3 million Ukrainian tourists visited Egypt. Now, the Ukraine airspace is closed for civil aviation and there will be no Ukrainian tourism to Egypt. Meanwhile, the Russians will be under great economic pressure in light of the imposed economic sanctions, which would block the flow of Russian tourists to Egypt.”

Nechai explained, “Ukraine submitted an official request to Egypt that includes a list of demands. It urged Egypt to affirm its solidarity with it by supplying it with weapons, defense equipment, ammunition, fuel and all supplies necessary to confront the largest army in the [European] continent. Ukraine also called on Egypt to provide it with financial support in addition to humanitarian aid, and to record all cases of violations of the provisions of international humanitarian law.”

He added, “It is in Egypt’s best interest that the war ends. We need Egypt to offer us humanitarian and medical aid, and help us with weapons, at its own discretion. Egypt’s food security depends on Ukraine to a large extent.”

Egypt is the largest importer of wheat in the world, and Russia and Ukraine are the main source of Egyptian imports, which exceed 50% of its annual consumption. In light of the chronic gap, wheat is among the strategic commodities that were directly affected by the war.

On Feb. 26, Egypt relaunched an international wheat tender to import wheat from April 13 to April 26, just 48 hours after canceling a tender that received a single offer as a result of the war.

Egypt had confirmed in a statement issued by the Ministry of Foreign Affairs following the invasion launched by the Russian forces, "The Arab Republic of Egypt is following with deep concern the successive developments regarding the situation in Ukraine, and affirms the importance of upholding dialogue and diplomatic solutions, as well as endeavors that would hasten the political settlement of the crisis in a manner that preserves international security and stability, and ensures that the situation does not escalate or deteriorate, and thus to avoid aggravating humanitarian and economic conditions, with their impacts on the region and worldwide.”

On March 2, the United Nations General Assembly (UNGA) overwhelmingly adopted a resolution condemning the Russian attack on Ukraine and calling on Russia to withdraw all its forces immediately. The majority of Arab countries voted for the resolution, while one Arab country opposed it and three countries abstained. Two Arab countries were absent.

During a March 3 press conference in Cairo, Nechai praised the Egyptian-Ukrainian relations at all levels, expressing appreciation to Egypt’s efforts since the crisis erupted and its condemnation of the Russian invasion during the UNGA meeting.

Karim Mostafa, Egyptian researcher specializing in international relations, told Al-Monitor that the Egyptian position was balanced. “Egypt is weighing all possible scenarios. It is vouching for ending the war in Ukraine as soon as possible, because this is in its best interest. A prolonged war will have severe adverse effects on its economy and on the global economy. On this point, Egypts agrees with the stance of the European community and the G-7,” he said.

He noted that Egypt has intertwined economic, tourism and political interests with the two parties to the conflict. "These include the issue of the Grand Ethiopian Renaissance Dam that is nearing settlement with the approaching third filling operation. The EU had issued statements assuring it will tend to this issue after the end of the Russian-Ukrainian war,” he said.

Mostafa added, “Egypt has fixed stances based on the need to respect international law and to settle disputes by peaceful means. It also asserts the need not to employ economic sanctions outside the framework of the international system.”

Political researcher in international affairs Muhammad al-Omari ruled out the possibility of putting pressure on Egypt and the Arab countries to modify their stance on the crisis and abandon their neutrality by using the food security trump card. He told Al-Monitor, “The rise in gas prices in Europe could provide an opportunity for Egypt and gas exporting countries. This could relatively compensate for the damage they will sustain from the rise of the price of grains.”

Nader Saad, spokesman for the Egyptian Council of Ministers, told Al-Monitor that his country has 14 approved countries for the supply of wheat, some of which are outside the European continent. “We are safe to a large extent. Last year, the supply of wheat to the government by farmers was 3.4 million tons and we expect production to hit 4 million this year,” he said.

He pointed out that the wheat cultivated area in Egypt is estimated at about 1 million feddans (1.03 million acres), each producing more than 3 million tons, and that the country has a silo storage capacity of 3.8 million tons.

“Egypt’s current strategic reserve of wheat amounts to 4.3 million tons. The country is diversifying its sources of supply and trying to increase the productivity of the feddan in the supply season in April. The strategic stock is sufficient for nine months, i.e., until the end of this year,” Saad noted.

The tension caused by the Russian war on Ukraine lifted the wheat ton prices in Egypt by about 1,000 Egyptian pounds ($63.65) while the supply of mills for flour production in the local market was not affected.

Ihab Idris, member of the Chamber of Grain Industry in the Federation of Egyptian Industries, told Al-Masrawy news website that the ton price in Egypt rose by about 1,000 pounds to range between 6,000 and 6,500 pounds ($382-$414), as a result of the repercussions of the global rise ensuing from of the Russian-Ukrainian crisis.