Ukrainians in Egypt are doing what they can to help or support their families back in Ukraine. 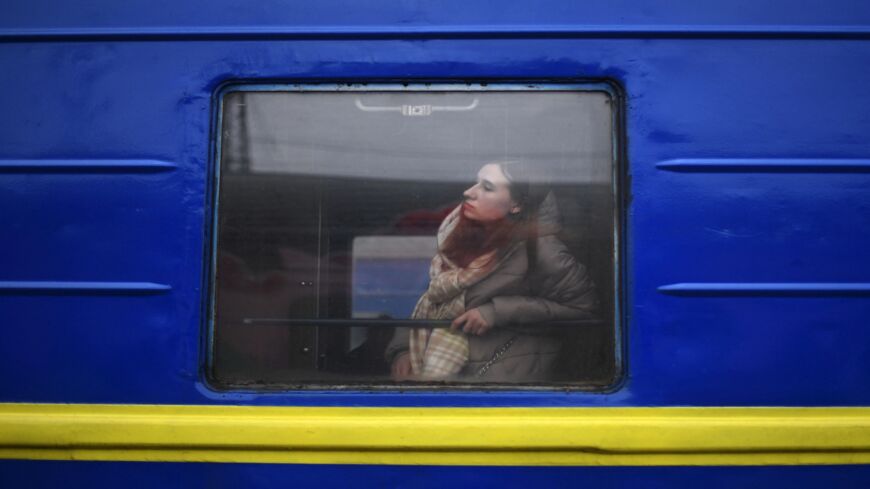 A woman arriving from Odessa looks out from a carriage window at a train station in Lviv, western Ukraine, as she prepares to continue her journey to Slovakia on March 3, 2022. - DANIEL LEAL/AFP via Getty Images

Ukrainian Liliia Diduk was awakened at 7 a.m. on Feb. 24 by nonstop text messages from her friends telling her that Russian President Vladimir Putin had ordered his forces to invade her country.

Diduk, who has lived in Cairo for the past eight years, could not have imagined that the tensions between the two countries, which have been ongoing for many years, would have reached the point of an invasion.

“We were sure that Putin would be afraid to invade Ukraine because then he would show the whole world his true face, but he did,” Diduk told Al-Monitor.

Diduk, who teaches English at a private school in Cairo, at first couldn't understand what was happening. “I was very afraid for my family. I immediately called my mother. She was talking very quietly, and she told me how they woke up to the sounds of Russian bombs attacking nearby. At the end of our call, she asked me to forgive her and said goodbye.”

“That was the only moment we cried,” she said.

Diduk is from Odessa, the third-largest Ukrainian city after Kyiv and Kharkiv, located in the southwest of the country on the Black Sea coast, and whose people speak both Ukrainian and Russian.

In the early days of the invasion, Russia mainly focused its military strikes on Kyiv in the north, Kharkiv in the northeast and the port city of Odessa.

Odessa is now closer than ever to falling. The strategically important city of Kherson at the mouth of the Dnieper River on the Black Sea was the first major city to come under Russian control just over 120 miles from Odessa, formerly a major trading port of the Soviet Union.

After Diduk spoke to her mother, she immediately checked on her two brothers; the eldest works in a bank in Odessa, and the other lives in the neighboring city of Mykolaiv in the south. “They still can't believe all of this is happening,” she said. “My brother can’t stop thinking about a way to keep his kids safe; they are 12 and 5 years old.”

Diduk explained that her mother refused to leave her home and move in with family members who live in Moldova, which borders Ukraine. Her younger brother in Mykolaiv initially helped the children and women move to the Moldovan border and later decided to return to join the army to defend his country against the Russian aggression.

According to the UNHCR, 1 million Ukrainian refugees have crossed into neighboring countries since the beginning of the Russian invasion.

The United States and its Western allies imposed harsh sanctions on Russia as part of an economic war aiming to isolate the country and cause an economic downturn, in the hope that Russia will back down and withdraw its forces from Ukraine.

Diduk has begun to help Ukrainian tourists stranded in Cairo against the backdrop of the closure of Ukraine's airspace. “We have a lot of people stuck here, and they have to go home to see their families. They are very afraid for the lives of their families back home,” she said.

According to the charge d'affaires at the Ukrainian Embassy in Egypt, Ruslan Nechai, there are over 16,000 Ukrainian tourists currently stuck in Egypt, mainly in Sharm el-Sheikh, Hurghada and Marsa Alam.

The Egyptian Ministry of Tourism asked in the first days of the Russian invasion the Hotel Establishments Chamber to extend the stay of Ukrainian and Russian tourists who are staying in Egyptian hotels and resorts and provide them with all necessary services free of charge until they are able to return to their countries.

Some Egyptian mobile operators, such as Vodafone and Orange, have also offered free international calls and messages to and from Ukraine, according to Diduk.

Egypt did not explicitly condemn the Russian invasion of Ukraine. This prompted the ambassadors of the G7 and the European Union in Cairo to issue a joint statement on March 1 calling on the Egyptian government to stand by Ukraine and condemn the Russian aggression against it.

One day later, on March 2, Egypt and 140 other countries voted in favor of a UN General Assembly resolution calling on Russia to immediately stop using force against Ukraine.

The current conflict directly affects Egypt since it is the largest wheat importing country in the world and over 70% of its wheat imports are from Ukraine and Russia.

Yaroslava Tokar, who lives in the Egyptian coastal city of Dahab on the Gulf of Aqaba, wished she could return to Ukraine to help with relief operations.

On March 2, the State Emergency Service of Ukraine reported that at least 2,000 civilians have been killed since the start of the Russian military operation, with hundreds of buildings destroyed, including transportation facilities, hospitals, schools and homes.

Tokar came from the city of Kropyvnytskyi in central Ukraine to Egypt two years ago on a humanitarian mission with the United World Cultures Foundation, a Ukrainian nonprofit organization, to provide a helping hand to the Egyptian children of the Bedouin tribes in southern Sinai. She teaches children to read and write, as many have not had the chance to go to school.

“Helping people is what I do, whether here in Egypt or in Ukraine. Now my country is going through very difficult and scary times. I wish I was there,” she told Al-Monitor.