Ukrainian tourists stuck in Egypt talk to Al-Monitor about the pain they feel to watch their loved ones and families suffering back home as a result of the Russian war. 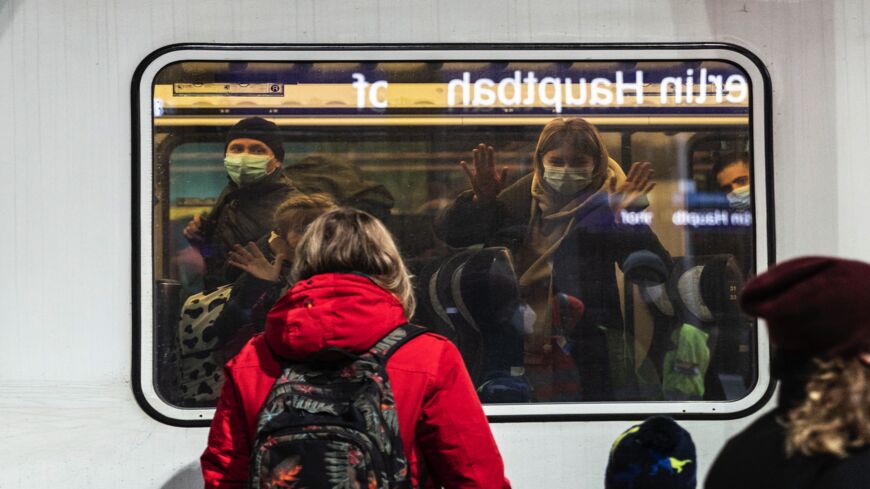 In its statement, the government also reiterated its support for Ukrainian tourists stranded on its territory by bearing the cost of their extended stay in Egyptian hotels.

Al-Sharq Al-Awsat newspaper quoted March 3 officials at the Ukrainian Embassy in Cairo saying there are around 20,000 Ukrainian tourists currently stranded in Egypt. The official stressed that arrangements are underway to help them leave Egyptian resorts to neighboring European countries.

The Egyptian Ministry of Tourism and Antiquities had decided Feb. 24 to extend the stay and bear the cost of Ukrainian tourists stranded in Egypt amid the ongoing Russian-Ukrainian war until their departure is arranged.

Al-Monitor spoke to some Ukrainian tourists who denounced the war on their country, calling on the Russian people to rebuke the actions of Russian President Vladimir Putin as causing pain to everyone. They urged Egypt to appeal to European countries to help Ukraine confront Putin's forces so as to prevent the spread of the war to other European countries.

Head of the Ukraine-based nongovernmental organization Kryla charity association Yaraslava Tokar, who is currently in the Egyptian coastal city of Dahab in the south of Sinai working temporarily at Kryla’s affiliated initiative in Egypt dubbed “Children of the Desert in Egypt” (a humanitarian and educational project for Egyptian children), thanked the Egyptian government for extending the stay of Ukrainian tourists.

She told Al-Monitor that Ukrainian tourists deeply appreciate the help and support shown by the Egyptian people who are offering food and shelter.

“I urged Ukrainian tourists in Egypt to avoid any tension or problems with Russian tourists also stranded in Egyptian hotels as well,” she said, adding, “They must abide by peace and exhibit civilized behavior despite the conflict between the two countries in order to maintain security and peace in Egypt.”

Tokar said her 18-year-old son back in Ukraine is receiving help from people around him, just as she is trying to help the Ukrainians stuck in Egypt after the Russian military attack on Ukraine.

She said that since the Russian military attack on Ukraine, she has been in constant contact with her Ukrainian friends who fled to European countries, with volunteers and embassies, as well as the Ukrainian community in Egypt, specifically in Dahab. “The Russian invasion of Ukraine is an unprecedented brutal act of aggression against the Ukrainian people, which led to destruction and the killing of civilians. People will not forget this unforgivable behavior by the Russian president,” she lamented.

In a message of support to the Ukrainian government and the Ukrainian army, Tokar said, "We are far from you, but our thoughts and hearts are with you just like the hearts of all Ukrainians around the world. You are our heroes. We pray for you. We pray for victory.”

She further urged the international community and European countries “to take action to help Ukraine repel the Russian aggression led by the tyrant Putin and his inhuman army so that the scenes of bombing schools, homes and nuclear plants are not repeated in other European countries. If we do not stop Russia now, there might not be a tomorrow for all mankind.”

Tokar pleaded with Russian mothers not to send their children to fight in Ukraine. “They are dying there for nothing. Part of the money and medicine collected to treat the Ukrainian fighters defending their country is being used to treat the Russian soldiers who are lying in Ukrainian hospitals. Those that the Russian government calls ‘Nazis’ are keeping your sons alive.”

In turn, Katya Kuzmina, a Ukrainian who is married to an Egyptian man and currently residing in Dahab, told Al-Monitor, “I cannot stop crying ever since the Russian invasion started. It is unbearable to know that your own people are suffering and there is nothing that can be done to save them.”

She noted that the Egyptian people have been sympathizing with Ukrainian tourists since the Russian invasion. “They always say that they are deeply sorry for what is happening in Ukraine.”

Kuzmina said Ukrainian tourists will gradually begin to leave Egypt to countries close to Ukraine such as Poland, Romania and Hungary.

On dealing with Russian tourists, Kuzmina explained that there are Russian tourists who oppose Putin and sympathize with the Ukrainians. While others support the Russian president, she said those ones "are not making any public comments."

She indicated that many of her female friends back home had to seek refuge in neighboring countries and leave their husbands because men are not allowed to leave Ukraine. “One of my friends who was pregnant was killed in the Russian bombing. I hope that Putin will stop the war and stop killing the Ukrainian people. The Russian people must be aware of the danger of Putin and his regime.”

On March 5, the Ukrainian Embassy in Egypt thanked on Facebook Egyptian President Abdel Fattah al-Sisi, the Egyptian government and the Egyptian people for providing support and facilities to Ukrainian tourists.