Iraqi students are stuck in Ukraine and seem unable to flee due to the Russian invasion of that country. 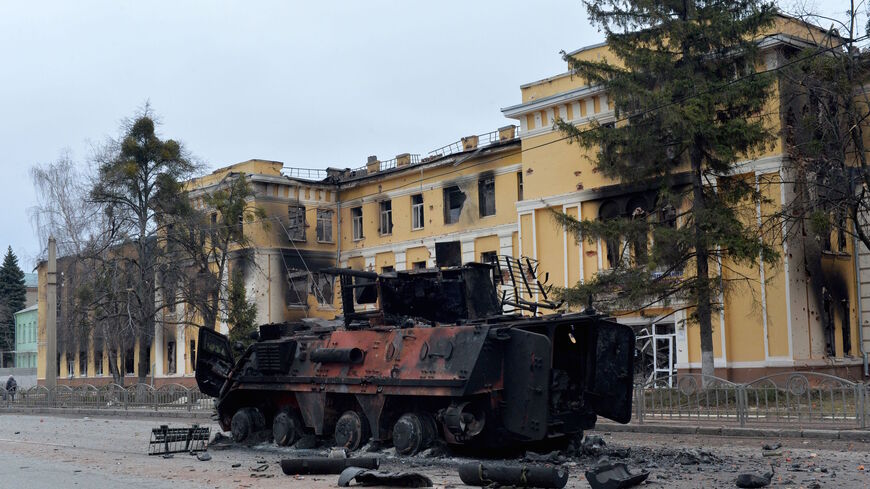 This photograph shows a Ukrainian armored personnel carrier (APC) BTR-4 destroyed as a result of a fight not far from the center of the Ukrainian city of Kharkiv, located some 50 kilometers from the Ukrainian-Russian border, on Feb. 28, 2022. - SERGEY BOBOK/AFP via Getty Images

Hundreds of Iraqi students are trapped in Ukraine as the Russian invasion enters its second week, with some arguing Baghdad isn't doing enough to get them out.

Commenting on the situation, Nuhad Khiqani, head of the representation of Iraqi students studying abroad, said, “They are crying. They are complaining about the lack of food, the sound of the explosions, closing the airspace to civilian flights and not being able to travel. They are facing tragic conditions.”

Some Iraqi students studying in Ukraine’s universities and institutes have been trying to leave Ukraine for other countries since the beginning of the invasion but are unable to do so.

In Ukrainian Facebook groups, which include Iraqi students, group members have exchanged information on escape routes toward Poland and other war-free countries, with some criticizing “the negligence” of the Iraqi Embassy in Kyiv.

The Iraqi Ministry of Foreign Affairs said on Feb. 25 that it supports the voluntary return of Iraqi students and is against forcing them to return. It indicated that there are contacts with the Iraqi community in Ukraine.

Ukrainian universities and institutes have hosted thousands of Iraqi students in the past few years, where education is much more affordable than in Iraq and majors are more plentiful.

The unfolding war has caused great fear and anxiety among Iraqis there, especially students who reportedly reside close to the Russian army’s range of fire.

Iraq's Foreign Ministry spokesperson Ahmed al-Sahaf told Al-Monitor that there are 450 Iraqi students in Ukraine out of a total of 5,537 Iraqis.

Although the Iraqi students appealed to be repatriated, the ministry said it has not received any repatriation requests.

"On Feb. 2, we urged Iraqis in Ukraine to leave the country. The situation has become difficult with the suspension of flights to Ukraine,” Sahaf said.

On Feb. 14, the Foreign Ministry addressed the Ukrainian colleges and institutes, stressing the need for them to grant Iraqi students leave of absence due to the deteriorating situation in the country, but nothing indicates that any Iraqi student left Ukraine before the start of the war.

On Feb. 22, the Iraqi Embassy in Kyiv advised Iraqis residing in Ukraine to leave the eastern parts of the country or any unsafe areas and move to more stable areas. It also provided a hotline for those wishing to leave Ukraine. Yet these instructions and the hotline were only made known after the airspace was closed.

In addition to the security developments and dangers in Kyiv and other cities, the Iraqis suffer from the lack of liquidity to be able to buy what they need and the suspended cash assistance from their families in Iraq.

Even those who have a good amount of money in their bank accounts or cards there cannot withdraw money because financial institutions have closed their stores and offices, an Iraqi in Ukraine explained in a video.

Seif Hadidi, who appeared in the video, is a medical school graduate in Ukraine. He told Al-Monitor, “The Iraqis in Ukraine want to return, and they can only do it through Poland.”

He added, “We in Kyiv need to travel a distance of 600 kilometers (372 miles) to get to the city of Lviv, which is 300 kilometers from the Polish border. We do not know whether we will be able to flee Ukraine.”

Hadidi, who is documenting the situation there on his Facebook account, said, “Some of the students did not expect the war to happen. We thought that the Russian aggression would be on Feb. 16, and when this date passed, we thought it would not happen.”

Before the invasion began, a group of Iraqi students submitted a request for a leave of absence, but the administrations refused and only agreed when the attack had already begun. Still, they could not travel because the country closed its airspace to civilian flights.

Iraqi students, like other residents in Ukrainian cities, are required to seek shelter in the metro stations from Russian airstrikes. Their economic situation and lack of financial resources remain the main challenge.

Most of these students who live in Kyiv need seven hours to reach Lviv, which is located 540 kilometers from Moscow, the Russian capital. Apparently, they cannot do so due to high transportation fees (which was up to $600 at the time of this writing), several Iraqi students in Ukraine told Al-Monitor via virtual communications.

A sixth-year medical student at Sumy State University in Sumy, Ukraine, who requested anonymity told Al-Monitor that the Iraqi Embassy did not give them any instructions or guidance on the evolving events, nor did it answer their calls.

“I live in Sumy, which is rocked with heavy shelling by the Russian army. I am stranded, along with my wife and child. We are trying to go somewhere safe, but we do not know what to do and we cannot afford to rent a car, particularly since car rentals increased four and five times," the student said.

Some Iraqi students in Ukraine, most of whom are alone, believed that Russia would not wage war against Ukraine. Those Iraqis already went through hell and wars in their own country, and living under such circumstances may not be very hard for them. But there is no doubt that they have been dealt a harsh blow in the very first days of a war that at this point has no end.