Egyptian students in Ukraine, fearing for their lives after the Russian attack on Ukrainian lands, call on the Egyptian authorities to secure their safe return home. 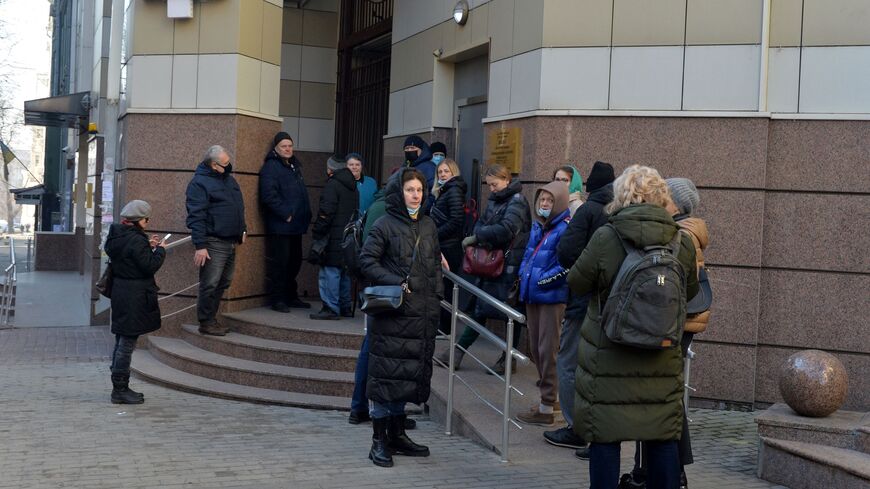 People queue outside a bank office in Kharkiv on Feb. 24, 2022. Russian President Vladimir Putin announced a military operation in Ukraine on Thursday with explosions heard soon after across the country and its foreign minister warning a "full-scale invasion" was underway. - SERGEY BOBOK/AFP via Getty Images

CAIRO — Egyptian students in Ukrainian universities have demanded the Egyptian government to help them return to their country until the situation in Kiev stabilizes.

On Feb. 26, twenty Egyptians arrived at a border camp in Poland, some by car, others on foot, as thousands of students from across the Middle East seek safety from Russia's expanding invasion of Ukraine.

The Egyptian Minister of Immigration and Egyptians Expatriates Affairs, Nabila Makram met with representatives of the Egyptian community in Ukraine Saturday, the Egyptian Independent reported discussing safe passage of its citizens.

On the morning of Feb. 24, Russia launched a military operation in Ukrainian territory. Hours after the attack, a number of Egyptian students in Ukraine called on Egypt for help, according to local press reports.

Taher al-Sayed, an Egyptian student residing in the Ukrainian city of Kharkiv, told Al-Monitor, “More than 5,000 Egyptian students are studying in Ukrainian universities this year. We are now under Russian fire. We have been in a perilous situation ever since we woke up in the morning to the sounds of Russian missiles.”

Kharkiv is the second largest Ukrainian city after the capital Kiev. It is about 35 kilometers from the border with Russia, making it at the focus of the Russian military operation.

Sayed, who is studying medicine at the Ukrainian University of Karazin, said that after several hours, Nabila Makram, Egypt's Minister of Immigration and Expatriate Affairs, promised to expedite the students' evacuation from Ukraine as soon as possible.

On Feb. 24, Makram held a Zoom meeting with 60 Egyptians in Ukraine, including citizens and students. “There are no cases of injuries or missing persons," she posted on her Facebook account on the same day. "We communicated directly with a large group of them in different cities inside Ukraine to check on them and determine their numbers and needs.”

She added, “The operations room of the Ministry of Immigration continues to monitor their data and whereabouts. There is continuous coordination within the Egyptian government.”

Egyptian local newspaper Al-Masry Al-Youm quoted Feb. 24 the Egyptian ambassador to Ukraine, Ayman el-Gammal, as saying that “coordination is underway with the responsible authorities in Egypt to develop a plan to evacuate Egyptians in Ukraine.”

Sayed said, “When Ukrainian authorities warned citizens of the imminent Russian attacks, I took cover in a tunnel below the building where I live. I entered the tunnel with my Egyptian colleague, and found dozens of Ukrainian citizens inside it.” He documented his journey to the tunnel in a video he posted on his Facebook account on Feb. 24.

Ahmed Gamal, an Egyptian student at the Kharkiv National Medical University, told Al-Monitor via phone that he has been hearing planes bombing the outskirts of the city since Feb. 24. “This sound is getting louder and closer. … We are living in terror,” he said.

Gamal has been studying medicine in Ukraine for six years. “The difficult humanitarian situation all residents of the city are now experiencing is unprecedented. People are rushing to food stores and cash machines in the streets. I could not find rice or bread the day following the attack. Drinking water bottles have also become hard to find.”

He explained that a large number of citizens in Kharkiv took shelter in metro stations and underground tunnels after hearing huge explosions.

Gamal warned that the lives of Egyptians in Ukraine are at risk at any time. “It is difficult to move or walk in the streets to the sounds of falling bombs,” he said. “Egyptian students are not all in one area in Ukraine. They are scattered across several cities.”

From Kyiv, Yasmin Atman, an Egyptian student at Taras Shevchenko National University, told Al-Monitor, “The situation is very difficult. The Ukrainian authorities have asked us to hide in shelters. I find it difficult to contact my family from inside the underground shelter because of the weak communication networks.”

Atman called on the Egyptian authorities to help evacuate nationals to nearby Poland or Romania, so that they could travel from there to Cairo. “The situation is getting more difficult by the hour, in light of the constant threat of Russian forces entering Kyiv,” she added.

The Ukrainian military said in a statement on Feb. 25 that Russian forces were approaching Kyiv from the eastern and northeastern sides. Associated Press also reported that explosions resonated in Kyiv on that day and gunfire was reported in the city center.

Maha Salem, a spokeswoman for Egypt's Ministry of Immigration and Expatriate Affairs, told Al-Monitor, “With the escalation of events in Ukraine, we were keen to coordinate with all relevant authorities to check on the Egyptians there, most of whom are students.” She said that in a Zoom meeting, "We urged them to follow the safety procedures announced by the Egyptian embassy in Ukraine.”

She added, “The ministry is following up on the situation of the Egyptian community in Ukraine. Our team is communicating with the community there to reassure students in cities close to the bombing areas and inform them of the Egyptian embassy's directives that guide them to safe areas.”

An Egyptian government source told Al-Monitor on condition of anonymity, “The closure of the airspace in Ukraine has made the task of evacuating the Egyptian community even more difficult, but in all cases we are helping them to be in a safe situation and we will stand by their side in any way we can.”