Jerusalem has been careful not to criticize Moscow publicly over Ukraine, but Foreign Minister Yair Lapid adopted a much harsher tone at a press conference today. 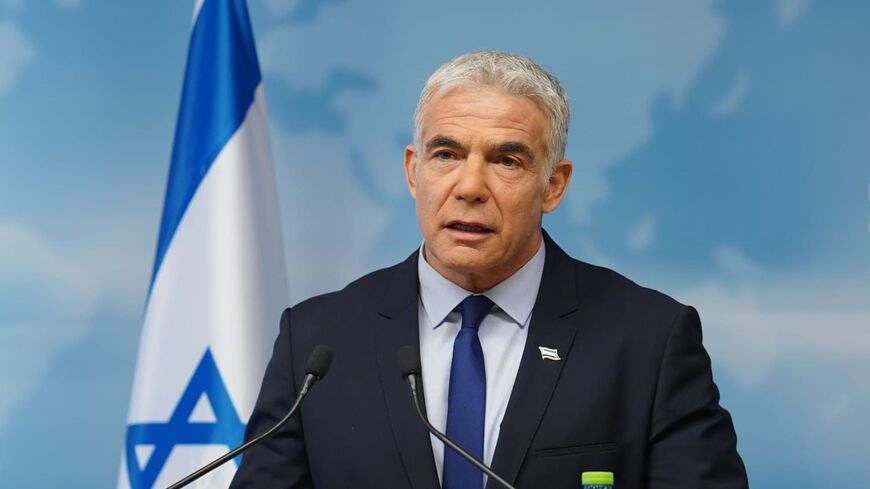 Foreign Minister Yair Lapid condemned Russian aggression toward Ukraine this morning, the first time that the Israeli leadership has done so publicly. Israel reportedly did not notify Russia ahead of the condemnation. Speaking at a brief press conference, Lapid criticized the “Russian attack on Ukraine” as “a serious violation of the international order." He said, "Israel condemns that attack and is ready and prepared to offer humanitarian assistance to Ukrainian citizens.”

According to Lapid, “Israel is a country that has experienced wars, and war is not the way to resolve conflicts. The first hours and days of any war are also the last time you can still stop and return to the negotiating table, mediated by world powers, to settle disputes peacefully.” Lapid also noted that Israel maintains “deep, long-lasting and good relations with Russia and Ukraine.”

Lapid emphasized that the safety of the thousands of Israelis and hundreds of thousands of Jews in both Ukraine and Russia is his primary consideration. He repeated his calls of the past two weeks for all Israelis to leave Ukraine, warning that there is already movement of refugees toward the west of the country.

Lapid explained that Israel had reached agreements with countries neighboring with Ukraine to facilitate the passage of Israelis and Jews in case of an invasion. Israeli consular staff are now present at the crossing points to help Israelis and Jews who wish to exit Ukraine and travel to Israel.

He said, “The border crossings where our people are stationed are the Medyka crossing on the Polish border, the Vysne Nemescke crossing on the Slovak border, the Zahony crossing to Hungary and the Siret crossing to Romania. Regarding the border crossing for Moldova, we will send a message later. We coordinated in advance with all these countries — Poland, Hungary, Romania, Slovakia and Moldova — to ensure that the departure of Israelis would be safe and smooth. I thank these governments for their assistance and goodwill." He also gave phone numbers for Israelis and Jews in Ukraine or their relatives in Israel to contact the Foreign Ministry for help.

Like other countries, Israel’s diplomatic staff in Ukraine and Ambassador Michael Brodsky relocated the embassy from the capital Kyiv to Lviv in the west Feb. 22. Jerusalem has reportedly notified both Ukraine and Russia of the new location of the diplomatic mission to ensure its safety. The Jewish Agency for Israel also moved its emissaries from Kyiv to Lviv, but continues to operate and provide services to Jews in Kyiv through local workers.

Israel has so far been careful not to criticize Russia directly. Jerusalem is wary of straining relations with Moscow and eager to maintain the security dialogue both countries maintain over Syria, especially regarding alleged Israeli aerial attacks on Iran-affiliated targets there. Another issue of concern to Israel is the large Jewish communities in both Russia and Ukraine. Israel cannot afford not to align with its greatest ally the United States, but has been trying to do so as discretely as possible. Yesterday, Jerusalem released a message supporting Ukraine’s “territorial integrity and sovereignty” without mentioning Russia.