Israeli Chabad emissaries in Ukraine and neighboring countries feel responsible for the safety and well-being of their Jewish communities. 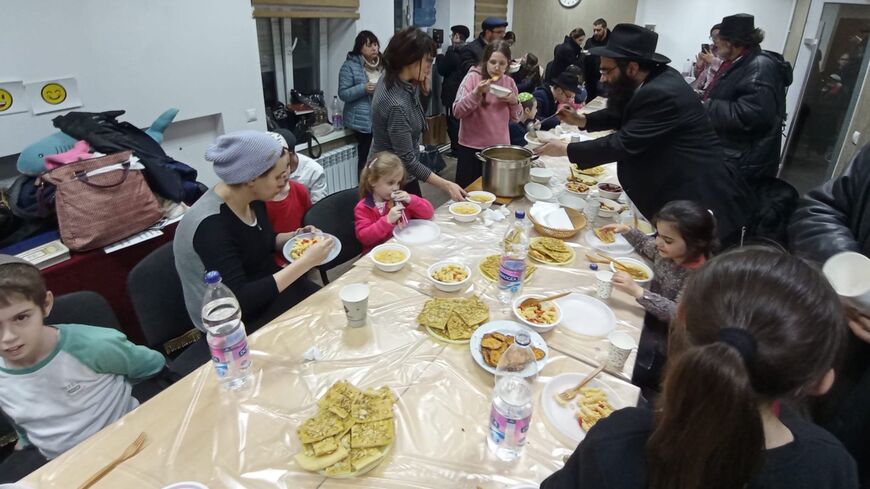 Two weeks ago, we had a chance to speak with Rabbi Moshe Weber of Israel, who runs the Chabad Hassidic movement’s Menora Center in Dnipro, Ukraine. At the time, he told Al-Monitor that he was worried, but not because of the tense situation between Russian President Vladimir Putin and Ukrainian President Volodymyr Zelenskyy. “If anything, the problem that really worries me is how I will get matzos for Passover?” he wondered.

Much has changed in the last two weeks. Weber sounds very different now. We caught up with him on a train approaching the Romanian town of Iasi, near the border with Moldova. His plan is to fly back to Israel from there.

He left Dnipro a day earlier, after spending the last 20 years there. “It has become a ghost town," he told Al-Monitor. “There is no one in the street. A general curfew has been declared, starting at 8 p.m. It is just too dangerous to be out in the street after that. … What happened to Roman Brodsky [an Israeli citizen killed while fleeing Ukraine] made us realize how dangerous the situation really is.”

That incident was a watershed moment for Chabad’s emissaries still in Ukraine. When the fighting broke out, they had announced that they would stay put. “My community needs me,” Weber said. “Even if my family leaves, I’m staying. Our Rebbe [leader] taught us that a captain does not abandon his ship.”

Since then, Chabad emissaries throughout Ukraine have proven themselves to be an island of stability in the war-torn country. They ensure a steady supply of food and medicine, remove the elderly from their homes to safe locations and even create community bomb shelters. They have also maintained close contact with representatives of the Israeli Foreign Ministry, who have set up shop at border crossings with neighboring states to the west in order to expedite the movement of Jews to safety.

The killing of Brodsky caused the emissaries to rethink their position. “As soon as we started seeing pictures of civilians receiving rifles, it all clicked for me,” one emissary, speaking on condition of anonymity told Al-Monitor. “The fact that anyone who wants can get a rifle and can pull the trigger creates a sense of anarchy.”

Weber noted that Brodsky's death was what made him decide that the time had come to leave. But while he is on his way out of the country, another Israeli — Rabbi Shlomi Vilhelm — is staying behind as the rabbi of Zhytomyr. One of the longest serving Chabad emissaries in Ukraine, Vilhelm established a vast educational empire in the city, including a large orphanage. When the fighting began, he made preparations to get the children out of the city first.

“We already left Zhytomyr on Wednesday,” said Rabbi Avrahami Deutsch, a member of the orphanage staff charged with bringing the children to safety. He told Al-Monitor, “These children left on a number of buses, made ready for the operation well in advance. Their destination is a hotel in Chernivtsi [Czernowitz], in the Carpathian Mountains. But this is not their final destination. It is just a waystation. Everyone wants to move west, to the Carpathians, and from there to the neighboring states.”

The orphanage has since the children left been occupied by families that fled Kyiv.

However, Vilhelm sees himself as a captain who will not abandon his ship, insisting on remaining in Zhytomyr. Photos that he sent Al-Monitor show Jews in the synagogue studying in preparation for his daily class. Since he has no staff left, he has been running the entire community by himself, while playing host to the many refugees who land there.

During our conversation, we suddenly heard him sigh in relief. He had just received a message from the manager of the orphanage, who left with the children, informing him that they arrived safely. She reported that they crossed the border into Romania at Siret, where they were met by Israeli Consul in Bucharest Roni Shabtai. The embassy had already obtained blankets, socks and handwarmers for them, along with provisions for the continuation of their journey.

“On behalf of the Israeli government and the embassy, I want to tell you that your story moved me deeply,” Shabtai told the children while they were still on the bus. “This is one of the most important events of my life. On behalf of the State of Israel, I wish you a better life. Go in peace, and continue on to a destination where you can have a much better life.” The children are now in the town of Cluj, and are expected to continue to Israel.

Speaking about the children’s evacuation from Ukraine, Israeli Foreign Minister Yair Lapid said, “There is no other country like this in the world. We are six days into a bitter war in Ukraine, and there have been moments that cannot be put into words. Over 100 Jewish orphans crossed into Romania at the Siret border crossing. The Foreign Ministry will accompany them until they arrive in Israel.”

While Chabad’s emissaries are active in Ukraine, emissaries in neighboring countries have been lending a hand. For instance, another rescue operation of children took place in Chisinau, Moldova. Led by Israeli Chabad emissary Rabbi Mendy Axelrod, the community welcomed the children from the Mishpacha orphanage of Odessa, headed by Rabbi Wolff, Chabad emissary to Odessa. In fact, Chisinau’s Chabad community has provided accommodations to hundreds of refugees in the region. The orphans received hot food and warm clothing before setting off to Germany.

“History is repeating itself,” Axelrod told Al-Monitor. “Long ago, during the Kishinev [Chisinau] pogrom [April 1903], Jews fled from here to Ukraine. Now they are fleeing here from Ukraine. … In any event, we are here for them and doing everything we can to make things easier for them.”

While some Chabad emissaries made the decision to leave of their own volition, it turns out that there were some who were asked to leave by the Ukrainian government. One of them is the Chabad emissary to Kyiv, Rabbi Jonathan Markovich. The Ukrainian security forces told him to leave the country for his own safety. Markovich had already prepared a bunker in the basement of his synagogue, where he was planning to stay with the members of his community. Many locals found shelter there, while the kitchen provides food for other members of the community, including several centenarians, who could not leave their homes.

As a result, he became a target of the Chechen militias. Markovich's wife told Al-Monitor, “A representative of the Ukrainian intelligence came to see us. He told us that because of my husband’s activities, he is considered an important figure and has been targeted by pro-Russian Chechen troops. We had to leave the country at once for his safety. We had 17 minutes to get ready and take everything we would need for our young children. We then went downstairs and got into a car, which was accompanied by a police car all the way to the border.”

Now safely in Poland, Markovich is still busy organizing food and medicine for the members of his community he was forced to leave behind, while Kyiv is being bombarded. “Being an emissary is a lifelong task,” he explained. “Even if you aren’t there, you are not absolved from the obligation to act.”