Arab-Israeli party rallies to get students out of Ukraine 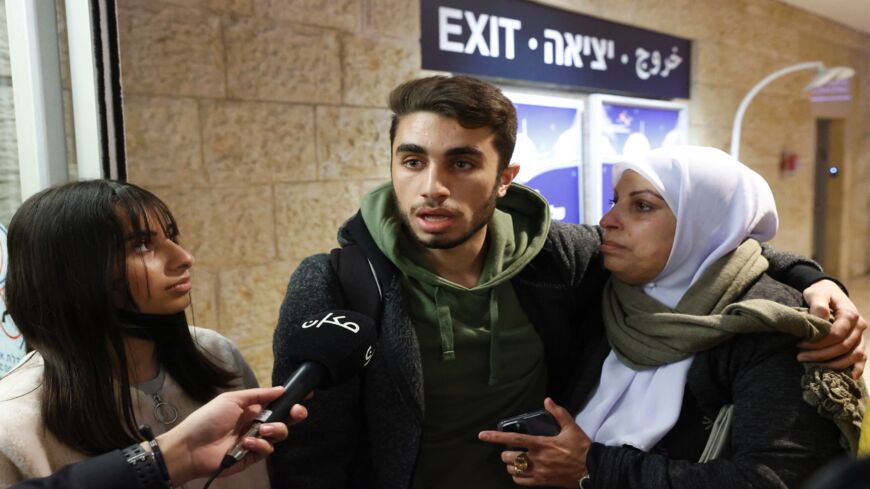 Israeli Arab passengers arriving from Ukraine via the border with Romania on an Israeli Israir rescue flight are welcomed by their family upon arrival at Israel's Ben Gurion airport in Lod, near Tel Aviv, on March 1, 2022. - JACK GUEZ/AFP via Getty Images)

Just hours after Russian President Vladimir Putin sent his troops to attack Ukraine’s cities on Feb. 24, Ra’am and the Southern Branch of the Islamic Movement opened a joint emergency situation room to oversee the extraction of Israeli Arab students. According to estimates, there are between 2,000 and 2,500 Israeli Arab students in Ukraine, most of them studying medicine. They decided to study overseas due to the difficulty in getting accepted to Israeli universities because of a limited number of places, particularly in the faculties of medicine.

As part of the operation, which was led by Ra’am, a number of pick-up points were created along the borders of countries neighboring Ukraine, including Poland, Romania and Moldova. Arab students were told to get to these points, where there would be party representatives and volunteers to provide them with transportation, lodging, food and drink. They would also be provided with an internet connection so that they could call worried family members back home and allay their fears. Finally, they would also arrange flights back to Israel for anyone who wanted that.

Ra’am’s rescue efforts were led by Knesset member Iman Khatib-Yassin and the party’s Director-General Ibrahim Hijazi. The party’s leader, Mansour Abbas, maintained constant contact with the Israeli Foreign Ministry and the embassy in Ukraine to coordinate with everyone working on the issue. The goal was to be totally synchronized at any given moment so that the operation would be as successful as possible.

The results were quick in coming. Within just two days, on Feb. 26 Ra’am announced that they were able to ensure the exit of hundreds of students from Ukraine, with an emphasis on Odessa, Dnipro and Kharkiv. Party representatives waited for them at the Moldova border crossing to provide them with lodgings in hotels and basic needs. Similar operations took place on Ukraine’s borders with Romania and Poland to help students arriving there. The students were then taken to the Romanian city of Iasi, from where they would be flown to Israel. Knesset member Khatib-Yassin managed contacts with the Foreign Ministry to ensure that there were flights from Romania to Israel. Then, on March 1, she waited at Ben Gurion Airport to greet the arriving students. Ra’am also provided these services to Arab students from other countries, such as Morocco, Lebanon, Tunisia and Jordan, and who came to the party’s meeting points across the Ukrainian border.

This complex logistical operation required numerous volunteers and party activists to get it off the ground. One of these was Dr. Julliette Shomali of Shfaram, who studied in Moldova. She did not hesitate to fly to Poland so that she could meet the students arriving there, help them with whatever they needed and volunteer her experience as someone who studied overseas.

She told Al-Monitor, “I was in touch with Knesset member Khatib-Yassin’s office and decided to travel there to volunteer. I spent four days on the Polish border. When I saw that there was a shortage of hotel rooms, I contacted representatives of the Franciscan church, which immediately rose to the challenge. They offered the students rides in their cars and provided them with lodging in the church’s monastery. On Sunday, The first day, I coordinated the arrival of 25 students; the second day, for another 30 students; and later, an additional six students. Some of the students were from East Jerusalem, and the Palestinian consulate in Poland joined in to help them. The Palestinian consulate in Poland helped with students from East Jerusalem.”

Also volunteering in Ra’am’s initiative was paramedic Fuad Issa from Kafr Qassem, a member of the European Emergency Committee, which acts during natural disasters. With experience in emergency situations, he worked in Ra’am’s situation room in Israel to help extract the students. He told Al-Monitor, “I decided to volunteer even though I am not a member of Ra’am or the Islamic Movement, because it is a humanitarian emergency. We were in charge of synchronizing transportation for the students to the various border crossings, which meant administering a complicated logistical operation long distance. We were in touch with the students, their families in Israel, the Israeli Foreign Ministry, hotels and the Franciscan church to coordinate all the different components of the operation. I will say that I heard some horrific stories. One student spent three nights in a metro station before we were able to locate him, bring him to the border and fly him to Israel. Students who arrived at the border in organized rides came from a variety of countries, but we focused first and foremost on helping Arab students from Israel.”

As if all of this is not enough, on March 5, Ra’am released a letter that it received from the Romanian Ministry of Education, with a preliminary agreement to enable students who fled Ukraine to continue their studies in various Romanian universities recognized by Israel.

There is no doubt that Ra’am wanted the upper hand in its competition with the Arab Joint List party over the Arab vote when it comes to the issue of Israeli Arab students in Ukraine. It wanted to show the Arab sector that being part of the coalition has diplomatic advantages as well. So, while Knesset members from the Joint list like Ayman Odeh and Ahmad Tibi left posts on Facebook for Arab students about how to contact the Israeli Foreign Ministry, Ra’am created a network that provided students with help on the ground.

Ibrahim Hijazi, who oversaw the operation, told Al-Monitor, “When the war began, I was on a private visit to Istanbul. The situation room was established in a very short time, so I had to manage everything from Istanbul. An initial investigation has found that there were some 400 Arab students in Ukraine. The rest had already left. We were able to help 220 of them to reach the borders with Poland, Romania and Moldova, along with dozens of students from other countries and Jewish students from Israel. As of today, we can say that there are almost no Arab students from Israel left in Ukraine. The experience we accumulated through the Islamic Movement’s aid efforts in emergency situations helped us create the logistical network in a very short time and manage it successfully.”