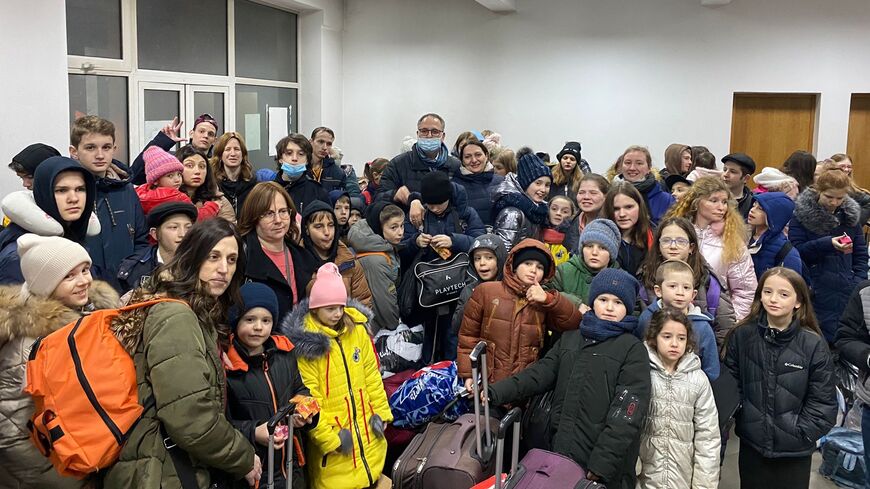 Israeli Consul in Romania Roni Shabtai poses with a group of Jewish children as they leave an orphanage in the Ukrainian city of Zhytomyr for the border with Romania, March 1, 2022. - Israeli Embassy in Romania

Foreign Minister Yair Lapid tweeted after the ministry meeting, “The reception stations at the border crossings are a new and important task. Citizens arrive there after hours and days on the road, and they need us. Our rescue operations are highly appreciated. We work in all areas, from the political sphere through humanitarian aid, vis-a-vis the neighboring countries. At the center of our concern is the mission of aid and rescue of thousands of Israelis from Ukraine.”

Lapid said that the Ministry of Welfare will be involved in providing assistance for Israelis with special needs. He also commended yesterday's operation to bring Jewish orphans out of Ukraine and noted that buses organized by the ministry to transport Israelis from Lviv and Kyiv to the border left full. He said more such buses are expected to depart from Ukraine today.

The operation to rescue Jewish orphans yesterday drew media attention in Israel and beyond. Israel’s ambassador and consul in Romania, David Saranga and Roni Shabtai, organized the operation. Some 100 Jewish children from an orphanage in the Ukrainian city of Zhytomyr were taken across the border into Romania more than 400 miles away. The journey reportedly took two days due to numerous forced stops and difficult traveling conditions. Some of the children did not have all the necessary documents for crossing, but local Romanian authorities assisted them in entering the country. The children will stay in the city of Cluj-Napoca in northwestern Romania for now and to travel to Israel later on.

Prime Minister Naftali Bennett tweeted after the operation, “On behalf of the citizens of Israel, I thank Israeli Ambassador to Romania David Saranga and Consul Roni Shabtai, who received the children at the border with blankets, warm socks and other necessities. Dear children, come home to Israel, we are waiting for you with love.”

Israel sent 100 tons of humanitarian aid to Ukraine March 1 on three El Al airplanes. The assistance included 17 tons of medical equipment and medicine donated by Israel’s Health Ministry and water purification equipment in coordination with the Water Authority as well as thousands of tents, blankets, sleeping bags and coats. The assistance arrived in Warsaw, Poland, to be distributed this week in Ukraine. Within the Foreign Ministry, Israel's Agency for International Development Cooperation is leading the country’s humanitarian assistance efforts.

Speaking with the press while the third airplane was being loaded, El Al Vice President Shlomi Amshalom said that in addition to transporting humanitarian aid, the airline has so far taken over 2,000 people from Ukraine to Israel. Israel has not released the exact number of Israelis and Jews who have fled Ukraine since the beginning of the Russian invasion.

Referring to criticism over Israel’s cautious diplomatic approach to the conflict, Bennett said yesterday, “From the first moment, Israel took a measured, responsible stance that allowed us not only to protect our interests but to be useful.” Bennett added that Israel has been “a reliable player, one of the few that can communicate directly with both sides and help when it is asked, and we are helping quietly.”

Bennett's comments came on the backdrop of reports that Ukrainian President Volodymyr Zelenskyy had asked the Israeli premier last week to assist in mediation with Russia, a request Bennett apparently presented in a telephone conversation with Russian President Vladimir Putin Feb. 27. Reports said that the Russian president did not reject the offer, but said he was working on talks in Belarus. Other reports claimed that in addition to proposing for Israel to mediate, Zelenskyy also asked Bennett for assistance with weapons and other military equipment and the Israeli prime minister declined. March 1 reports that some of the weapons Germany and the Netherlands intend to ship to Ukraine are manufactured by Germany’s Dynamit Nobel Defense, a subsidiary of Israel’s Rafael Advanced Defense System. Neither official Israeli sources nor Rafael confirmed the news.

Speaking at a joint press conference today in Jerusalem with visiting German Chancellor Olaf Scholz, Bennett said that Israel stands by Ukraine and as leaders, both he and Scholz are obligated to do everything in their power to stop the bloodshed and move the conflict from the battlefield to the negotiation table. Israel had sent already much humanitarian assistance to Ukraine and is determined to send even more, he added.