After avoiding a request to cosponsor Russia condemnation at the UN Security Council, Prime Minister Naftali Bennett has now said Israel will vote in favor of a similar US proposal at the UN General Assembly. 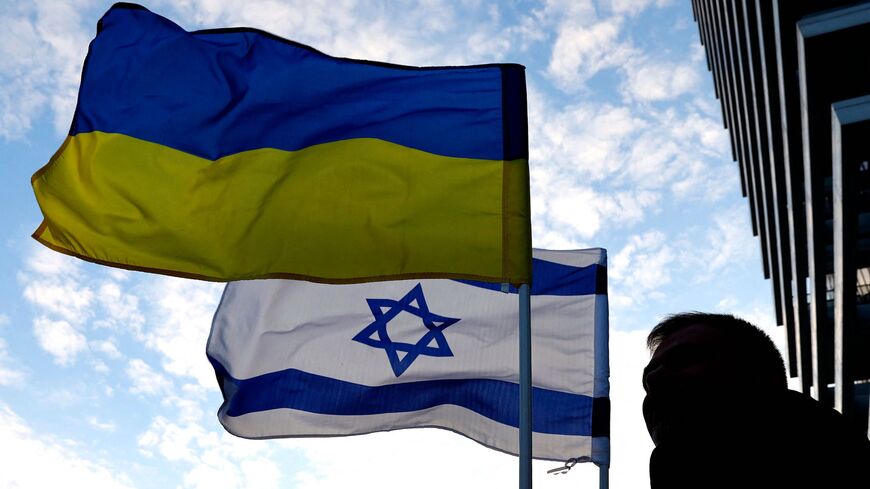 The flags of Ukraine and Israel fly during a protest against Russia's military operation in Ukraine, in front of the Russian Embassy in Tel Aviv, Feb. 26, 2022. - JACK GUEZ/AFP via Getty Images

Israeli Foreign Minister Yair Lapid said today that Israel will join the UN General Assembly resolution condemning the Russian invasion of Ukraine. Israel has a moral responsibility to both condemn Russia and give humanitarian assistance, said Lapid, adding that “Israel was and is on the right side of history.” He noted that three planes will leave Israel for Ukraine today and tomorrow with humanitarian aid.

Reports in Israel over the past few days have noted that Jerusalem was uncomfortable with formally speaking out against the Russian invasion. Lapid did condemn the Russian attack on Ukraine Feb. 24, but Prime Minister Naftali Bennett did not follow up with a condemnation of his own. Despite a request from the United States to co-sponsor a UN Security Council resolution condemning Russia’s actions, Israel refrained from doing so. As UN procedures enable members to back resolution drafts submitted to the council without being a member, 81 countries agreed to cosponsor the American resolution against Russia.

Having walked a fine line between Washington and Moscow, Bennett nonetheless said in yesterday evening's security cabinet meeting that Israel will vote in favor of the US proposal expected today that will call for a cease-fire and condemn Russia. His statement was echoed today by Lapid. Israeli experts feel that an Israeli vote in favor of condemning won’t lead to a diplomatic confrontation with Russia if Israel maintains relative neutrality.

"In the name of all Israeli citizens, I’d like to express the hope that the conflict in Ukraine will end soon before we see severe humanitarian implications graver than we can even imagine," Bennett noted, adding, "We pray for the citizens of Ukraine and hope for an end to the bloodshed."

On Feb. 27, the Israeli Foreign Ministry also met to reassess the situation. Lapid said after the meeting, "I convened this morning at the ministry’s emergency center a meeting for reassessing the situation in Ukraine. I instructed them to concentrate our efforts on assisting Israeli citizens queuing at border crossings and on transferring humanitarian aid to Ukraine according to the lists of equipment requested by the Ukrainians. According to our data, some 2,000 Israeli citizens have left Ukraine since the beginning of the fighting. According to our most recent information, the border crossing points to Poland are very busy. The Foreign Ministry recommends Israeli citizens trying to reach the border arrive instead to the crossing points to Hungary, Romania, Slovakia and Moldova."

Lapid added, "The staff of the Israeli Embassy in Ukraine and the additional staff assisting them constantly cross the border from Poland to help Israeli citizens move over to Poland. The ministry’s international development agency Mashav is handling preparations for the delivery of humanitarian aid to Ukraine later this week."

Last week, following other Western countries, Israel decided to relocate its embassy from Kyiv to Lviv in the West of the country. But on Feb. 25, Israel decided to move its staff out of Ukraine, relocating the embassy to Poland. The Israeli diplomats and representatives have since been crisscrossing the border daily from Poland into Ukraine to help Israeli citizens. In a communique this weekend, Lapid asked all Israeli citizens trying to leave Ukraine to place big signs saying IL (for Israel) on their clothes or vehicles to facilitate reaching them at the busy crossing points.

Israel’s public broadcaster Kan reported Feb. 25 that Ukraine had asked Israel to mediate in talks with Russia. Following the report, Ukraine’s Ambassador to Israel Yevgen Korniychuk confirmed to The New York Times that in a conversation with Bennett, Ukraine’s President Volodymyr Zelensky asked for Jerusalem to serve as a mediator with Russia and that Bennett did not give an immediate answer. Kan reported Feb. 27 that Bennett spoke on the phone with Russian President Vladimir Putin, explaining, "Bennett offered to mediate talks between Russia and Ukraine. According to the Kremlin, Putin told Bennett that Russia is ready for talks in Belarus, claiming that Kyiv is not seizing the opportunity."

While Bennett is not involved in mediating the talks now taking place in Belarus, The Jerusalem Post reported this morning that Russian-Israeli billionaire Roman Abramovich has traveled to Belarus to participate in the discussions, apparently at the request of Ukraine.