Foreign Minister Yair Lapid has made it clear that if Jews in Ukraine find themselves in need of rescue, Israel will be there for them. 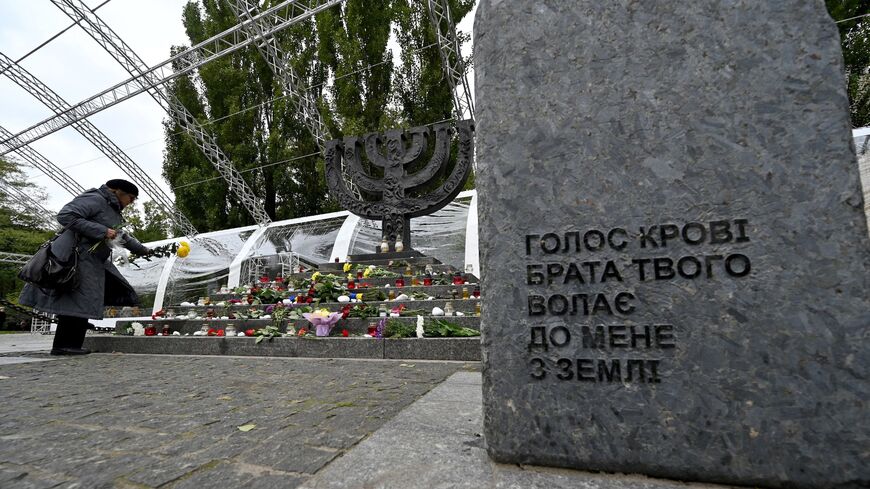 People light candles at a memorial in Kiev on Sept. 29, 2021, on the 80th anniversary of the Babi Yar (or Babin Yar) massacre, one of the largest mass slaughters of Jews during World War II. - SERGEI SUPINSKY/AFP via Getty Images

Foreign Minister Yair Lapid has repeatedly called for Israelis to leave Ukraine over the last few days. "I continue to call on Israelis in Ukraine: Do not take unnecessary risks, come home. Better to be safe than sorry. If a war breaks out, it will be much harder to board flights; it will be much harder to leave Ukraine and return to Israel. In the next day or two, it would be still relatively simple. Israeli airlines are increasing flights. Anyone who wants to return to Israel can. The Foreign Ministry will increase its manpower in Kyiv. If necessary, we will open another office in Lvov. We will make sure that every Israeli and every Jew who wants to come home receives all the help they need," he tweeted.

Israel is preparing for the eventuality of Ukrainian Jews asking to be evacuated as well. In an interview this morning with the Times of Israel, Lapid said, “If the Jews in Ukraine are going to feel they’re in jeopardy and they need to be rescued or helped out, Israel will be there for them, as it was for Ethiopian Jews during the civil war or the waves of hunger there, and so on.”

Lapid's words join a series of statements by Israeli officials in recent days calling for Israelis to leave Ukraine. Prime Minister Naftali Bennett called Feb. 12 on all Israeli citizens in Ukraine to leave the country immediately. A statement issued by his office said, “It was agreed to raise the travel warning for the area, along with calling on Israeli citizens to immediately leave.”

Last night, Lapid called upon all Israelis still in Ukraine to urgently leave the country, saying that according to American assessments of the situation on the ground, there is “an especially small window” to evacuate them. Speaking in press conference at the Foreign Ministry, Lapid explained, “We are still hoping that the crisis is solved through diplomatic means, but we also have a responsibility as a country toward Israeli citizens there, as well as toward the Jews.” He added that Israel is preparing for the possibility that if flights are ever no longer an option, Israel is also prepared to evacuate Jews and Israelis overland through Poland, Hungary, Romania, Moldova and Slovakia.

Recent publications in Israel suggested that some time ago, Israel had already prepared plans to rescue Ukrainian Jews, bring them to Israel and temporarily house them. The number of Jews in Ukraine is murky: There are an estimated 48,000 to 50,000 Ukrainian nationals considered Jews according to Jewish traditional law (their mother is Jewish) and about 200,000 Ukrainian nationals eligible to immigrate to Israel according to the Israeli Law of Return (which enables a person with one Jewish grandparent to immigrate to Israel and become an Israeli citizen).

Absorption Minister Pnina Tamano-Shata said yesterday, “We have no way to indicate at this moment how many potential olim [immigrants] will enter Israel at this point, but we need to be prepared,” adding that the possible number of Ukrainian Jews in need of immediate evacuation could reach “tens of thousands or just thousands.”

Israel has been cautious so far not to express support for either side in the Ukraine-Russia conflict, especially on the backdrop of the Vienna talks in which Russia is a major player, and taking into account the Russian presence in Syria. Another significant element for Israel is the large Jewish communities in Ukraine and in Russia. Asked about that at the press conference yesterday, Lapid said, Jerusalem will maintain its neutrality for their sake. "I may be more cautious than other foreign ministers because I have a problem that other foreign ministers do not have: Russia and Ukraine both have large Jewish communities and part of our responsibility is to keep them safe and that requires caution. Our stance is that all options must be exhausted to avoid an armed conflict between Russia and Ukraine."