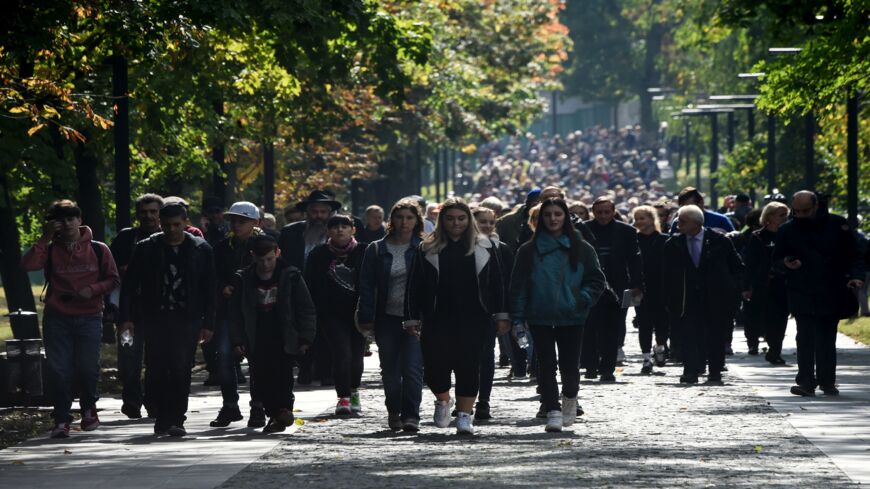 People walk toward the menorah monument at the Babyn Yar Holocaust Memorial in Kyiv, Ukraine, on Sept. 29, 2019, to mark the 78th anniversary of the beginning of the mass execution of Jews in September 1941. - SERGEI SUPINSKY/AFP via Getty Images

On the backdrop of growing tensions and speculation over an imminent Russian invasion, Cabinet ministries in Jerusalem prepare for the possibility that thousands of Ukrainian Jews would want to immigrate to Israel. Reports this week revealed that representatives of government offices and groups, including the prime minister’s office, the Foreign Ministry, Diaspora Affairs Ministry, Absorption and Integration Ministry, and the Jewish Agency, met on Jan. 23 to discuss such an eventuality, including the possibility of airlifting Jews eligible to emigrate from Ukraine. Another such meeting is expected to take place Feb. 1 to reevaluate the situation.

According to some reports, the Ukrainian Jewish community includes about 48,000 people. Other reports say that some 75,000 Ukrainian nationals could be eligible for immigrating to Israel under the Israeli Law of Return, which offers Israeli citizenship and the right to immigrate to Israel to anyone with a Jewish grandparent. The Absorption Ministry said that in 2021, 3,080 Jews emigrated from Ukraine to Israel, a little bit more than the 2,971 who came from Ukraine in 2020. Israeli authorities reportedly expect these numbers to grow significantly this year, especially if tensions in Ukraine escalate.

The Absorption and Integration Ministry told Israeli press, “At this time, there is no increase in the number of immigrants from Ukraine compared to last year. If there will be, the ministry is prepared to handle it as it has in the past and is in contact with the relevant parties, including the Jewish Agency and [the liaison bureau within the prime minister’s office] Nativ.” The statement added that Minister Pnina Tamano-Shata is following the situation closely and is updated constantly.

According to his office, over the past few weeks, Diaspora Minister Nachman Shai has been in close contact with officials in the Jewish community in Ukraine. "The State of Israel has a moral responsibility to assist Jews in distress. We have proved in the past that we embrace this responsibility, and if needed, we will act upon it again. Nevertheless, that does not mean that there will be planes flying (from Ukraine) to Israel immediately tomorrow morning. We will examine the circumstances and find ways to help in any way possible," said Shai. The minister also noted that in the past, Israel supported the Jewish community in several ways, including financially.

Tamano-Shata and Shai were careful not to address specifically the Russia-Ukraine diplomatic crisis, focusing only on the issue of the Jewish community there and expressing solidarity. Other Cabinet ministers have been careful not to address the issue at all, and for good reason, as Ukraine is supported by Israel’s strongest ally, the United States.

Relations between the two countries have been complicated over the years, especially with the resurge of Ukrainian nationalist sentiments and manifestations of veneration by the Ukrainian state of people who fought alongside Nazi Germany in World War II, including some Ukrainian personalities (negatively) linked to the Holocaust. Protests by former Israeli ambassador to Ukraine Joel Lion, leveling criticism over this national, official attitude, received chilly reactions from Kyiv.

Still, since his election to office, Ukrainian President Volodymyr Zelensky reached out to Israel on several occasions. For instance, last December, addressing Kyiv Jews, he drew parallels between Ukraine and the Jewish people. “We know what it’s like not to have an own state. We know what it means to defend one’s own state and land with weapons in hand, at the cost of our own lives,” said Zelensky.

Also last December, the Ukranian Ambassador to Israel Yevgen Korniychuk said his country recognizes Jerusalem as Israel’s “one and only capital.” He added that Ukraine will open a branch of its embassy in Jerusalem in 2022 when President Zelensky is expected to visit Israel. He was talking at an event marking 30 years of bilateral ties between the countries.

Surprisingly, Ukraine had even asked Prime Minister Naftali Bennett to speak on its behalf to Russia. Reports a few days ago revealed that when Bennett was preparing for his Sochi meeting last October, Kyiv reached out to Jerusalem and asked if it could assist in mediation with Moscow. Apparently, Putin rejected this proposal and nothing came of it.

That put aside, Jerusalem considers its relations with Moscow as of utmost strategic importance, especially on the security level and regarding Syria. Israel greatly values comunication channels between the two armies regarding the Syrian airspace, and view its relations with Moscow as a key element in its campaign against Iranian entrenchment in Syria. Also, with Russia being a permanent member of the UN Security Council and part to the Vienna talks with Iran, nurturing bilateral diplomatic and security relations are a top priority for the Israeli government. Prime Minister Naftali Bennett last spoke on the phone with Russian President Vladimir Putin Jan. 13. He had spoken with him several times in the past. The two had met in Sochi (Russia) in person last October for a very amicable encounter that lasted several hours. Putin also invited Bennett and his wife to visit soon St. Petersburg, an invitation the Israeli premier had gracefully accepted.