Palestinians in Ukraine fear another exodus

Palestinians residing in Ukraine, most of whom have taken refuge in the country to escape the Israeli wars, may have to emigrate again due to the Russian invasion. 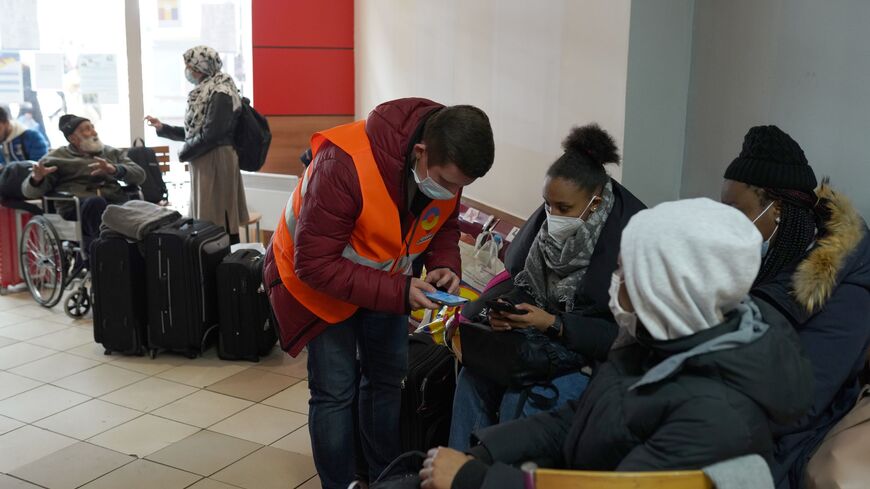 A Ukrainian volunteer helps Nigerian nationals who fled the conflict in Ukraine find a taxi, in the North Railway Station on March 3, 2022 in Bucharest, Romania. According to the United Nations, more than a million people have fled Ukraine for neighboring countries since Russia launched a large-scale invasion on February 24. - Andreea Campeanu/Getty Images

Palestinians residing in Ukraine, most of whom have sought refuge over the past years to escape the repeated Israeli wars, are facing the risk of emigration again due to the devastating Russian invasion.

The Palestinian community in Ukraine is one of the largest Arab communities in the country, with approximately 4,000 people, including citizens, students and business owners. Most live in the outskirts of the capital, Kyiv, currently a prime military target of the Russian advance.

In coordination with the Palestinian embassy in Ukraine, a number of Palestinian citizens were able to reach Poland and Romania on the borders with Ukraine, and more students and citizens are now preparing to leave.

Russia launched a military operation against Ukraine on Feb. 24, and the United Nations High Commission for Refugees said that more than 500,000 people have fled Ukraine since then. According to the agency, the European Union countries indicated their willingness to accept all refugees arriving from Ukraine.

Abd al-Rahman Muhammad, a 27-year-old Palestinian student who moved from the Gaza Strip to study in Ukraine, told Al-Monitor that he fled with a group of his Palestinian colleagues to Poland, near the border with Ukraine, after rockets and bullets fell near his residential building in Sumy, eastern Ukraine.

His escape was mostly on foot due to the absence of transportation, the lack of fuel, and the Russian forces besieging the city by land. However, it is difficult for many Palestinians in the city to risk their lives and flee the conflict, he said.

“As Palestinians, we are haunted by war wherever we go. We resorted to a safe country after the continuous Israeli wars prevented us from receiving decent education, let alone job opportunities related to our university majors. But what is currently happening inside Ukraine perpetuates our suffering and prompts us to migrate once again to the unknown,” Muhammad added.

Ehab Abdel Aziz, a 49-year-old Palestinian citizen residing Kharkiv, the second-largest city in Ukraine, described the situation as worrisome as the conflict intensifies and Russian soldiers use lethal force. But he finds it difficult to leave Kharkiv, where he lives with his family of four, due to the risks involved.

Kharkiv is "subjected to sporadic, intense and indiscriminate bombardment on the part of the Russian forces," he told Al-Monitor, and "leaving it would be very dangerous due to the closure of train stations and the lack of all means of transportation in the city.”

Abdel Aziz is in constant contact with the Palestinian embassy in Ukraine to secure a safe exit, but he said that the embassy keeps asking him not to leave his house due to the difficult circumstances.

Meanwhile, the head of the Palestinian community in Kharkiv, Amr Amro, told Al-Monitor that the situation is very difficult in the absence of basic supplies.

During the first days of the war, he said, large numbers of Palestinians, especially students, were able to migrate to many neighboring countries, most notably Poland.

But he pointed out that Palestinian refugees and Arab refugees in general get a temporary visa, and if the war in Ukraine lingers, they will be forced to return to their original town.

“The Russian war on Ukraine does not differentiate between Ukrainians and other communities. The Palestinians in particular, especially the residents of Gaza, are facing great difficulties during the current conflict, as they have been subjected to previous wars, evacuations and killings, and they do not want to be exposed to such wars again,” Amro added.