Egypt is dealing with soaring prices of bread and food products. 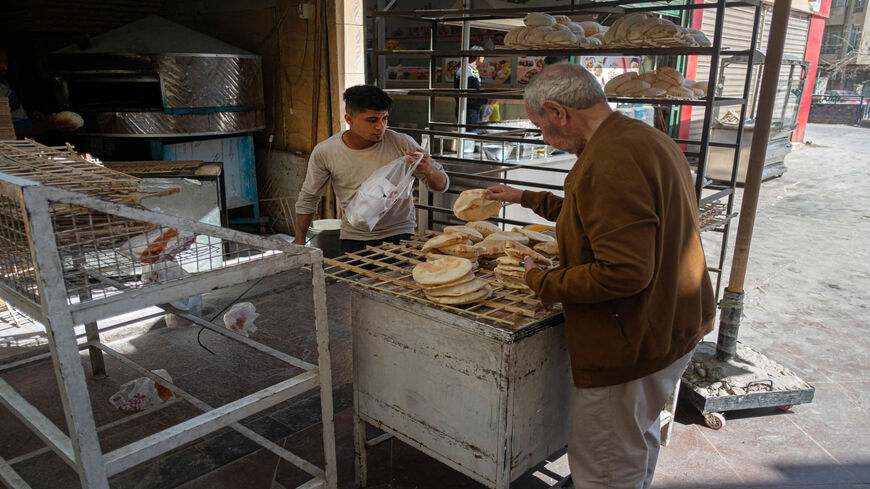 CAIRO — Egypt’s President Abdel-Fattah al-Sisi directed March 15 the Egyptian armed forces to offer basic food commodities to the neediest at reduced prices in coordination with the Ministry of Supply and Internal Trade and the Tahya Misr (Long Live Egypt) Fund.

In a meeting with the minister of defense, the prime minister, the minister of supply and internal trade and the minister of interior, Sisi called for “the distribution of food boxes to the neediest groups across the republic as the holy month of Ramadan draws near,” according to a statement by Egyptian presidential spokesman Bassam Radi.

Radi said that Sisi asked the government to “set the price of unsubsidized bread in a bid to reduce its price hike, and asked the Ration Investigation Office [affiliated with the Ministry of Supply and Internal trade] to ensure the implementation of the new pricing.”

The president’s directives came as Egyptian bakeries had illegally increased the price of a loaf of bread recently amid the ongoing Russian war on Ukraine.

Meanwhile, the Egyptian Ministry of Interior launched the activities of the 22nd phase of the “All of Us Are One” initiative, aimed at reducing prices. The activities consist of providing food commodities at discounted prices in a number of outlets to fight monopoly. They will be held under the auspices of the president for a period of 30 days, in coordination with the various sectors of the ministry and security directorates and major commercial chains across Egypt.

The repercussions of the war between Russia and Ukraine caused a hike in the prices of basic commodities in Egypt, especially wheat, oil, corn and fodder.

The price of nonsubsidized bread consequently witnessed a price increase, as Egypt looks for wheat in international markets amid the Russian war on Ukraine, the world’s two largest suppliers of wheat.

Egypt is one of the largest importers of wheat in the world, and 80% of its wheat comes from Russia and Ukraine, while it also imports other commodities from these two countries such as iron, steel and oilseeds.

Speaking to Al-Monitor, Fakhri al-Fiqi, head of the parliamentary Planning and Budget Committee, attributed the causes of the global inflation to the growth in global demand for all kinds of goods and services as a result of the rapid economic recovery in the wake of the easing of coronavirus-related restrictions. He explained that the growth rates exceed the total supply of those goods and services, and attributed such hikes to bottlenecks hitting the supply chains as a result of the Russian invasion of Ukraine.

He said that about 50% of the increase in inflation rates in Egypt is related to the worldwide inflation resulting from the Ukrainian crisis, which caused the suspension of grain supply centers, especially wheat, and the increase in wheat prices by more than 60%.

Russia and Ukraine, he noted, produce about 30% of the world’s wheat crops, hence the increase in the price of a loaf of bread, as well as some other basic commodities imported by Egypt, such as oils and sugar.

He added, “The price hike is ultimately borne by consumers, who are divided into two segments: those with high incomes who are less affected by such price increases, and those with middle and low incomes who can't afford such increases. The latter account for about 65% of the citizens, or about two-thirds of the Egyptian population, i.e., about 105 million people, according to official statistics.”

Fiqi said that the state’s mission consists of helping out about 65 million people who are eligible for support in order to help them weather this crisis. The government’s plan, he continued, includes raising the salaries of government employees (30 million people, including their families), as well as raising the pensions of retirees (25 million individuals, including their families). This is what the political leadership has currently done by instructing the government to take these measures in the new budget next July.

The Egyptian government subsidizes supply commodities in its general budget with more than 87 billion Egyptian pounds ($4.7 billion), of which subsidized bread accounts for more than 57%, with 72 million citizens benefiting from such subsidies.

Fiqi pointed out that until the salary and pension increases are implemented, there are temporary measures taken by the state. These include the provision of goods at reduced prices at the outlets of the Ministry of Supply and the Egyptian army, in addition to monitoring the monopolists of goods to address price hikes and reduce burdens on low-income people, as well as setting indicative prices and banning the export of basic food commodities, he added.

Fiqi said he expects the central bank to follow a strict monetary policy and regulate the import of basic commodities in order to rationalize imports and limit them to basic commodities and production requirements to reduce inflation.

He said a raise in the interest rate will encourage people to save their money in banks and postpone potential purchases and thus reduce liquidity in the economy and, by extension, the demand for products and goods.

On March 21, Egypt’s Central Bank announced an interest rate increase, for the first time since 2017.

On March 17, Minister of Supply and Internal Trade Ali al-Moselhi announced the daily pumping of 50% more food, meat and poultry products into consumer complexes with discounts of up to 30%.

During a Cabinet meeting March 3, the Egyptian government warned traders against price gouging. Prime Minister Mustafa Madbouly stressed that he will be monitoring the markets to prevent retailers from taking advantage of the circumstances to achieve personal interests.

Yomn el-Hamaky, economics professor at Ain Shams University in Cairo, told Al-Monitor that the commodity outlets of the armed forces and the Ministry of Supply and Internal Trade play a strong role in addressing the rise in prices, which is an important mechanism to protect the middle class during this period. But this cannot continue indefinitely, she warned, saying, “We need to raise the market efficiency by creating opportunities for new producers to participate in economic activity and engage in markets, which would increase the supply of goods and undermine monopolies.”

She pointed out that there are constraints exemplified by the lack of data and information related to the market. In addition, the size of the participation of small enterprises in economic activity is still weak despite the initiatives launched in this regard amid the slow pace of plans to integrate the informal sector into the economy, all of which are reasons that lead to a short supply of goods.

“The development of market-focused mechanisms will ensure greater participation of the private sector and breathe new life into the economy, as the state maintains its supervisory role in controlling markets and confronting monopolists,” she concluded.