For low-income households, bread and its price have become all the more important now that their purchasing power has melted amid the slump of the Turkish lira and surging inflation. 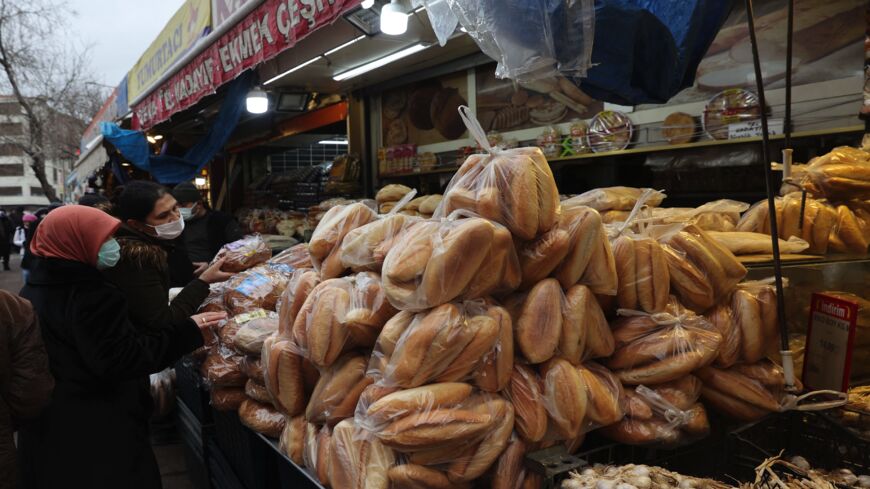 Women shop for bread at a market in Ankara on Dec. 20, 2021, as Turkey's troubled lira nosedived today after the Turkish president cited Muslim teachings to justify not raising interest rates to stabilize the currency. Erdogan has pushed the central bank to sharply lower borrowing costs despite the annual rate of inflation soaring to more than 20%. Economists believe the policy could see consumer price increases reach 30% or higher in the coming months. - ADEM ALTAN/AFP via Getty Images

Long lines of people waiting to buy cheap bread in the winter cold have become a common sight across Turkey in recent weeks as the price of the most indispensable of staples has soared, with more hikes looming down the road.

As in all Eastern nations, bread is a key food in Turkish cuisine, meaning that the prices of bread and baked products in general are always important for the populace. For low- and middle-income groups, bread and its price have become all the more important now that their purchasing power has melted amid the slump of the Turkish lira and surging inflation.

Turkey has come to rely on imported wheat to meet the domestic consumption of bread and baked products and sustain an exportation drive in the sector. Drought has further raised the need for imported wheat this year. Hence, a combined impact — the global increase in wheat prices and the depreciation of the lira — has fueled the string of price hikes in the sector.

Wheat importation has become a structural downside for Turkey amid shortfalls in domestic production. The government has been subsidizing wheat imports for years, keen on encouraging exports by flour producers. This policy appeared sustainable when hard currency prices rose at a reasonable pace, but not so since the price of the dollar exceeded 10 liras in November.

Turkey’s monthly consumer inflation is expected to hit a staggering 15% in December and bring the annual rate to at least 35%. The Turkish Statistical Institute (TUIK) is due to release the official figures Jan. 3.

The institute assigns a 26% weight to food in its monthly consumer inflation survey. Bread has a 2.5% share in that rate. With other baked products included, the share rises to 5%.

The prospects for December and ensuing months appear even gloomier in the wake of the lira’s dizzying depreciation over the past month. The price of the dollar rose 70% to 17 liras on Dec. 17 from 10 liras on Nov. 16. The lira may have massively rebounded since Dec. 20 over Ankara’s plan to safeguard lira deposits against the currency’s swings, but the costs of inputs imported earlier on higher foreign exchange prices are already factored into the costs of goods and services in the near term.

According to the TUIK, Turkey’s wheat sufficiency rate — the extent to which domestic production meets domestic demand — stands at 89.5%, meaning that the remaining 10.5% gap is covered through imports.

Turkey’s wheat cultivation fields have shrunk by more than a quarter to 9.2 million hectares in the past decade. This year’s wheat output is estimated at 17.7 million tons — a nearly 14% decrease from 20.5 million tons in 2020 and the lowest amount in the past 14 years. The decline owes prominently to severe droughts in the eastern, southeastern and central regions of the country.

While the decline in output raised the need for imports, the cost of imported wheat increased, both because of the nosediving lira and the global increase in wheat prices amid the COVID-19 pandemic. As a result, the prices of wheat, flour and bread have risen sharply in Turkey, as have the prices of many other goods. As of mid-December, bakeries in Istanbul sold a 220-gram loaf of bread for 3 liras, meaning 13.6 liras per kilogram — an increase of more than 50% over a month.

The Istanbul Metropolitan Municipality has long run a bread enterprise that sells bread at subsidized prices. Its price currently stands at 1.25 liras per loaf, or less than a half of the bakery price. Although the enterprise has a market share of only about 10%, its lower price matters hugely for low-income and crowded households.

Yet Istanbul Mayor Ekrem Imamoglu has conceded that the municipality is struggling to sustain the price. Referring to a flour tender held by the municipality earlier this month, he said, “A bag of flour was worth 127 liras in 2021, but now the lowest bid we received is 325 liras per bag. We’ll do our best to continue to offer cheap and healthy bread to Istanbulites.”

On the importation front, the lead actor is the state-owned Turkish Grain Board (TMO), which effectively subsidizes local flour producers. It has paid an average of $340, or about 4,000 liras per ton, of imported wheat while selling it for about 2,500 liras to flour producers. This pricing policy is meant to prevent steep increases in bread prices at home and incentivize exports by flour producers. The resulting loss is foisted on the central government budget and thus taxpayers.

Flour alone accounts for 30% of the cost of bread. Bakeries would pay 160 to 170 liras per 50-kilogram bag of flour in late May as the wheat harvest began. By early December, the price hit 300 to 320 liras, despite the TMO’s low-price policy. And with the rising cost of other inputs, chief among them energy, monthly hikes on the price of bread have become almost inevitable.

But while flour producers can freely adjust their prices in line with rising costs, bakeries are barred from doing so. The price of bread in each province is determined through a chain of approvals, stretching from local trade chambers to governors' offices. And bakeries often struggle to secure a price hike, even if their costs have risen.

For cheaper bread, Turkey needs to boost its domestic wheat supply to about 30 million tons a year, which it has the potential to do by supporting producers. Such an increase will help also the exporters of flour and other products such as pasta and biscuits. Turkish exporters of flour and pasta, in particular, have become notable players in foreign markets in recent years. Yet relying on imported wheat appears to be no longer viable.