Turkish social media swirled with rumors Monday of possible bread price hikes following a record slide in the nation’s currency, and economist say the anxiety could add to inflationary pressures. 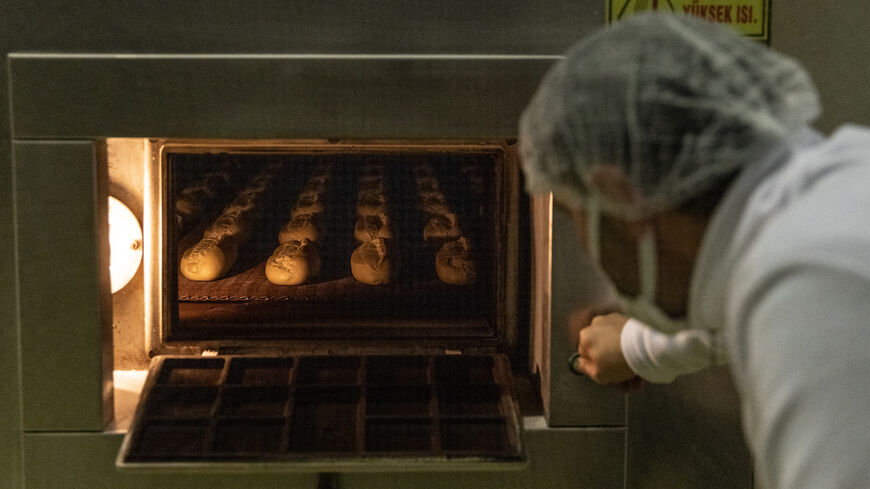 The term “Ekmek 4,” meaning “Bread 4 liras,” was trending on Turkish Twitter Monday as unsubstantiated rumors swirled over a potential rise in bread costs. A loaf currently sells for between 1.25 and 2.5 liras, depending on location.

“It’s impossible for bakeries to sell bread with the same prices as before because 50 kilos of flour was 200 liras last week, but this week it’s 380 liras due to the new exchange rates,” Cihan Kolivar, chairman of the Bread Producers Employers Union in Turkey, told Al-Monitor.

Responding to the price-hike rumors, Halil Ibrahim Balci, president of the Turkish Bakers Federation, said in a statement Monday, "The news that bread will cost 4-5 liras does not reflect the truth.”

"Flour prices, yeast prices, electricity, natural gas and water prices change every day, but this does not mean that we will leave our citizens without bread,” Balci said, adding, "We are in favor of a solution through consultations.”

Kolivar criticized Balci’s remarks, saying he did not represent the bakery sector. Balci did not respond to request for comments for this report.

According to the Turkish Ministry of Agriculture and Forestry, Turkey imported about 10.8 million tons of wheat in the 2019-2020 season, about 65% of which came from Russia. In the first four months of 2021, Turkey’s wheat imports fell 24%.

The combination of higher import prices due to new exchange rates and reduced stocks could trigger the rumored price hike, Balci told Al-Monitor, adding that Turkish bakeries are already operating under heavy strains.

“People in the bakery business are like slaves,” Balci said. “They have no holidays, no days, no nights, they just continuously work.”

The concerns come as annual inflation in Turkey neared 20% in October, with food prices logging a 27.41% annual increase that month.

The combined decisions have brought down the nation’s key policy rate 400 basis points to 15% since September, well below the official inflation rate. In issuing the latest cut, policy-makers signaled another rate cut might be introduced in December.

He added, "Just as we brought our country out of all these traps and calamities, we will emerge victorious from this economic liberation war with the help of Allah and the support of our nation."

The same day, the Turkish Statistical Institute published new figures reporting Turkish consumer confidence fell 7.3% in November to the lowest recorded level since 2004, when the data point was first tracked. The consumer confidence index is a gauge of consumer sentiments regarding personal financial status and the general economic outlook.

For weeks if not months, consumer fears and complaints of rising food prices have been prevalent on Turkish-language social media. In assessing current exchange rate volatility, Eray Yucel, an economics instructor at Ankara’s Bilkent University, said some state action would be necessary to bring stability to the currency, which he argued is best “achieved by correctly setting the CBRT's policy rates rather than bluntly distorting the relative prices in markets."

“This is the beginning of a new era,” Yucel told Al-Monitor. “I don’t want to give bad news, but if not controlled in time, there will be more inflationary pressures.”

Yucel said he recently conducted personal research to understand whether price increases in common goods and food products sold in Turkey were being driven primarily by exchange rates, production costs or international pressures. He concluded exchange rate pressure and pass-through costs to consumers were the primary causes behind recent price hikes.

“Politicians are blaming international food prices when they try to explain domestic food prices, but when we remove exchange rates from the equation, the pressure from international prices is not very high” and only a portion of what’s driving price increases, Yucel told Al-Monitor.