Amid a sharp slide in the nation’s currency, the Turkish Central Bank announced it would intervene in markets and sell foreign exchange reserves Wednesday to stem volatility in the Turkish lira. 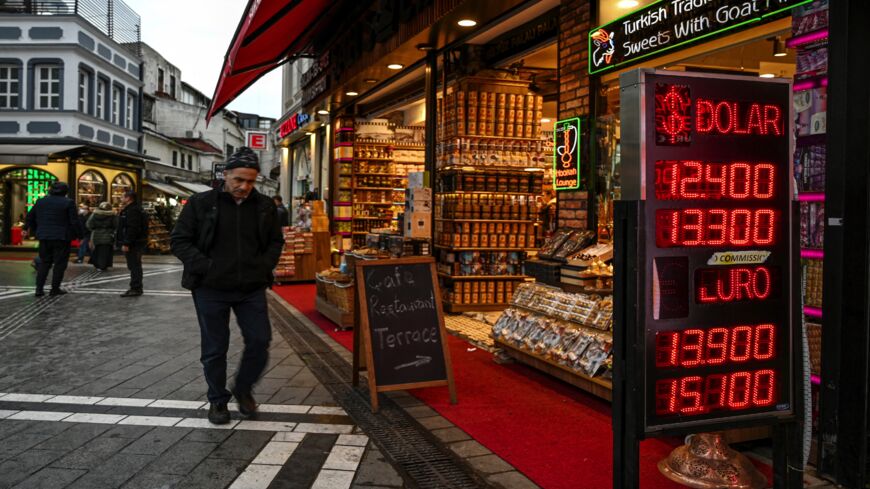 A man walks past a currency exchange agency near Grand Bazaar in Istanbul on Nov. 24, 2021, in Istanbul. The Turkish lira plunged to record lows after the president stuck to his support for interest rate cuts, warning his country was in a "war of economic independence." - OZAN KOSE/AFP via Getty Images

ISTANBUL — After losing 28.3% of its value against the US dollar last month, the Turkish lira remained volatile Wednesday, prompting intervention by the country’s central bank.

In a pair of press releases issued Wednesday, the bank announced it would directly intervene by selling foreign exchange reserves and conducting transactions on the Borsa Istanbul Derivates Market “due to unhealthy price formations in exchange rates.”

The intervention comes amid one of the deepest slides in the lira’s recent history as the currency makes and breaks record lows with increasing regularity. The lira briefly traded at a new low just shy of 14 per US dollar early Wednesday before rallying to about 12.50 following the central bank’s statements.

Since then, the currency trimmed gains and was trading at about 13.30 per US dollar at 7 p.m. Istanbul time. The currency is down 45% against the greenback so far this year.

Recent slumps in the lira have closely followed a series of speeches by Turkish President Recep Tayyip Erdogan in which he has doubled down on his oft-repeated claim that high interest rates cause high inflation, contradicting mainstream economic theory.

The Turkish leader’s focus on keeping rates low and credit cheap saw the nation log 7.4% annual growth in its gross domestic product for the third quarter, the highest among G20 countries, according to data published Tuesday.

Yet analysts warn such policies could prove unsustainable over time, threatening further depreciation in the lira as Turkey faces high inflation — just under 20% year-on-year in October, while the Istanbul Chamber of Commerce reported an annual 24.05% rise on retail prices in November.

“I think we know what Erdogan’s re-election strategy is, right?” Timothy Ash, an analyst at BlueBay Asset Management, told Al-Monitor. “It’s low rates at any cost.”

Ash said Erdogan appears to be “taking a bet” that cheap credit will accelerate economic growth and reverse his party’s slumping poll ratings ahead of general elections expected in mid-2023. Ash noted recent statements by central bank policymakers, as well as Erdogan himself, might also pave the way for a further interest rate cut in the next rate-setting meeting on Dec. 16.

“It’s fiscal easing, and if anything goes wrong, it’s on foreigners,” Ash said. “In reality, he’s gambling big time with the Turkish economy.”

Over the last few weeks, the Turkish leader has frequently spoken about a new economic vision for Turkey driven by exported goods, manufactured at competitive costs with the aid of a weaker lira and low labor costs.

Critics have noted many Turkish manufacturers rely on imported materials, which they acquire at increasingly unfavorable foreign exchange rates, and therefore will see their potential profits cut by pass-through costs.

The following day, the Turkish leader advised citizens not to panic while pledging to bring down inflation without the help of “global economic tutelage institutions” like the International Monetary Fund.

“Turkey has now abandoned the monetary policy based on high interest rates that caused several developing countries to remain stagnant," Erdogan said Wednesday to lawmakers with his Justice and Development Party in the Turkish parliament. "Instead, we have transitioned to a growth strategy aiming for investment, employment, production and exports.”

He added, "Interest rates are an evil that make the rich richer and the poor poorer."

"There are those in the world who take the flat-earth theory seriously and discuss it, but no one takes Erdogan's 'flat economy' thesis seriously," Aksener said, later adding, "This country cannot be abandoned to this ignorance anymore.”

The central bank’s foreign exchange sale Wednesday marks the first such move, officially, since 2014 when the bank sold off 3.15 billion USD. Between 2018 and 2019, the bank reportedly sold tens of billions of dollars in foreign currencies to prop up the lira before depleting reserves.

According to data released Nov. 19, the central bank’s gross reserves were about $128.5 billion, with $60.5 billion in bank swap deals. Though Goldman Sachs estimates the country’s net reserves excluding borrowed funds are -$46.8 billion.

Ash, from BlueBay Asset Management, said Wednesday’s intervention may not inspire confidence in Turkish consumers, but it was necessary to temporarily stave off a deeper depreciation.

“I think people began to think that it’s getting so desperate that the only solution is capital controls,” Ash said, referring to limits on foreign capital flows in an economy.

Turkey’s November inflation data will be published Friday, Dec. 3, with a Reuters survey forecasting an annual increase to 20.7%, the highest level since 2018.