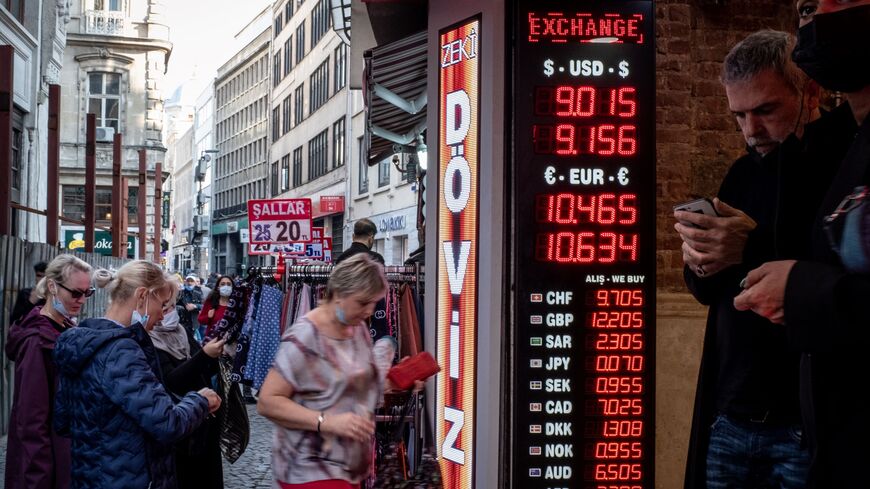 People line up to exchange money at a currency exchange office on Oct. 14, 2021 in Istanbul, as the Turkish lira dropped to a record low against the US dollar. - Chris McGrath/Getty Images

Reiterating his view that high interest rates cause inflation, rather than the reverse as set forth by mainstream economic theory, Erdogan vowed to “lift the interest rate burden from citizens” in order to protect consumers during a speech to his party members Wednesday.

The comments deepened a slide in the Turkish lira, which has been plumbing record lows in recent days and hovered around 10.60 per US dollar on Wednesday evening in Istanbul.

Since the start of the year, the lira has fallen 28 percent against the greenback, making it the weakest emerging market currency as investors hedge risks posed by the Turkish leader’s perceived influence on monetary policy.

With annual inflation at nearly 20 percent, Erdogan has pushed for lower interest rates to reduce borrowing costs, and monetary policymakers have followed through, cutting the nation’s key rate by 300 basis points since September to 16 percent.

Erdogan’s latest statements come a day before the Turkish central bank’s monetary policy committee is set to hold its next rate-setting meeting, in which analysts predict a further cut of 100 basis points to 15 percent, according to surveys by Reuters and Bloomberg.

Observers say another cut could deepen investors’ concerns that Turkey is pursuing a premature easing cycle to spur growth, at the risk of further weakening the nation’s currency and causing steep increases in consumer prices.

“In a global environment where major central banks are talking about tightening their stance due to inflationary pressures and Turkey's emerging-market peers are hiking rates to counter rising risks, slashing the policy rate deeper into negative territory destroys the Turkish central bank's credibility – not that there is much left of it,” Peker told Al-Monitor.

Following a pair of larger-than-expected interest rate cuts in September and October, the Turkish lira has fallen more than 10 percent against the US dollar in the third quarter alone.

Thursday's decision on whether or not to cut the rate again will likely set the course for Turkey’s economy moving forward, according to Ugras Ulku, head of European emerging markets research at the Institute of International Finance.

If the central bank refrains from a cut of more than the expected 100 basis points, "the lira will likely stabilize or even see a relief rally, especially if the market sees a positive surprise … to hold its key policy interest rate unchanged at 16 percent,” Ulku told Al-Monitor. “Further interest rate cuts and the resulting additional lira depreciation would deteriorate the already very challenging inflation outlook and increase financial stability concerns.”

Amid high inflationary trends, some analysts have suggested Turkey’s current economic model is based on increasing exports, which rose 60 percent year-on-year in the second quarter of 2021, and are expected to boost the nation’s overall gross domestic product for the year above 9 percent.

“The comments that our government is aiming for a high exchange rate in order to support exports are not true,” Elvan told lawmakers. “Turkey is implementing a floating exchange rate regime, the value of the exchange rate is also determined by the market.”

Critics of the export-led growth theory have also noted that many Turkish producers rely on imported goods, as well as imported energy, which are both tied to foreign currency rates and not the Turkish lira. The result is many domestic producers must increasingly bear rising input costs while simultaneously facing pressure from the Turkish government not to transfer those costs to consumers.

Still, food costs were up more than 27 percent year-on-year in October, according to official data, and Turkish citizens have increasingly faced higher grocery and utility bills.

In response, the government has promised to increase minimum wage and introduce some tax cuts while also opening access to cheap credit. Such measures may only exacerbate current trends by spurring more dollarization, Peker said, and could have long-term political consequences for Erdogan and his ruling party ahead of general elections in mid-2023.

“Heading into the next elections and beyond, this will only further diminish Erdogan's credibility as a capable steward of the economy, and trigger more unforced policy errors," Peker told Al-Monitor. “Voters will not be forgiving on the economic deterioration, which will further undermine Erdogan's re-election bid and stoke more uncertainties.”