The central bank hikes its benchmark rate for the first time since 2018, hoping to curb double-digit inflation and a currency that is plumbing record lows. 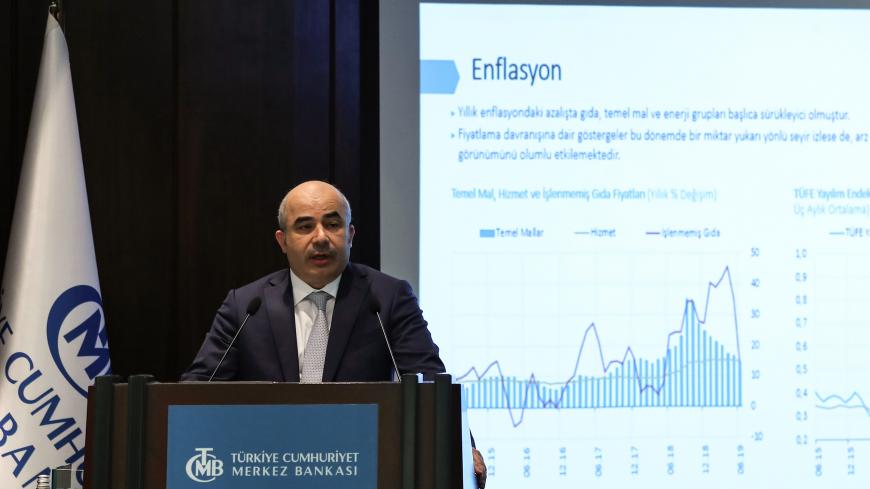 Governor of Central Bank of the Republic of Turkey Murat Uysal presents the inflation report during a press conference in Ankara, on July 31, 2019. - ADEM ALTAN/AFP via Getty Images

Policy-makers lifted the benchmark one-week repo rate by two percentage points to 10.25% after the lira hit yet another record low against the dollar earlier in the day. The currency has lost a fifth of its value this year amid fears that Erdogan’s quest for growth at all costs could unleash economic havoc.

The central bank’s decision revived the currency, which gained 1%. Economists had expected the bank to leave interest rates untouched at 8.25%, according to surveys by Bloomberg and Reuters.

Inflation is nearly 12%, which means the real interest rate in Turkey is still negative, since inflation is well above the premium investors earn on lira-denominated assets. Foreigners have dumped more than $5 billion worth of Turkish stocks this year, and that outflow, coupled with a flight from bonds, a slump in direct investment and the loss of tourism revenue during the coronavirus pandemic, has heightened the risk of a balance-of-payments crisis as Turkey imports more than it exports and its private and public debt balloons.

Despite these risks, the central bank has been under pressure to keep interest rates low by Turkey’s powerful leader. Erdogan wants cheap credit to fuel fast-paced economic growth, a hallmark of his 17 years in power. But gross domestic product saw a record contraction of 11% in the second quarter at the height of the pandemic, compared with the first three months.

Erdogan subscribes to the unconventional view that higher interest spurs inflation and has accused an “interest rate lobby” of undermining the economy. He fired the previous central bank governor for failing to reduce interest rates, and the current governor, Murat Uysal, has obliged by cutting rates nine times, or by almost 16 percentage points, since assuming his post last year.

Analysts speculated about whether Uysal first got permission for Thursday’s rate increase, the first since a 2018 currency crisis, from Erdogan or if the bank acted alone. Just last month, as the lira was plumbing record lows, Erdogan again demanded lower interest rates.

In a statement accompanying the hike, the rate-setting monetary policy committee blamed “higher-than-envisaged” inflation on the country’s strong economic growth. “The committee assessed that the tightening steps taken since August should be reinforced in order to contain inflation expectations and risks to the inflation outlook,” it read.

But the new stance appears to be an acknowledgement that the bank’s other efforts to buoy the lira had failed. It was forced to abandon an unofficial currency peg after nearly depleting its foreign currency reserves, now at a 20-year low, through interventions in the currency market. Last month it began tightening liquidity with tweaks to its interest rate corridor without outright raising the benchmark rate in an opaque, complex set of steps that has frustrated investors.

“Investors have never looked favourably upon the bank’s use of the rate corridor to adjust monetary conditions as it demonstrated the political influence on central bank decisions,” Jason Tuvey, senior emerging markets economist at London’s Capital Economics, wrote in a note to investors. “Hiking policy rates is a clear step in the right direction and suggests that the bank may be taking the fight against inflation more seriously.”

The rate hike may now help to restore the bank’s standing, he said. “The central bank of Turkey appears keen to claw back some of its damaged credibility.”

However, Thursday’s decision does not mean Turkey is out of the woods. Other factors weighing on the economic outlook include tensions with the European Union over the government’s search for hydrocarbons in Mediterranean waters claimed by Greece. Erdogan may have forestalled the threat of EU sanctions by pulling back a seismic research vessel and accompanying warships and announcing talks with Greece.

The ratings agency Moody’s warned this week that the lira’s sharp depreciation this year may swell the government’s debt burden to 43% of GDP this year, compared with 33% in 2019. Moody’s had already pushed Turkey’s sovereign credit rating deeper into junk territory with a downgrade earlier this month.

“Although Turkey has faced bouts of currency pressure before, in net terms the government has almost depleted the external buffers that would allow it starve off a potential balance of payments crisis,” Moody’s said in an emailed report on Monday. “The government continues to prioritize credit growth, and political pressures on central bank independence mean real interest rates remain negative despite above-target inflation.”

The lira’s precipitous fall this year could also be contributing to shortfalls in critical imports, such as pharmaceuticals. Pharmacists are reporting that stocks of certain medications are unavailable.

The US ambassador in Ankara, David Satterfield, said on Wednesday the Turkish government, the nation’s biggest purchaser in the health care sector, owes foreign drug companies and medical equipment makers about $2.3 billion in arrears, compared to $230 million a year ago.

“Companies will consider departing the Turkish market or will reduce exposure to the Turkish market,” Satterfield said during an online trade conference, according to Reuters, and added that these companies have been asked to accept less than what they are owed.