The currency tumbled after policy-makers disappointed expectations they would raise the benchmark rate, while geopolitics and the possibility of new coronavirus measures hitting the economy also weigh on the embattled lira. 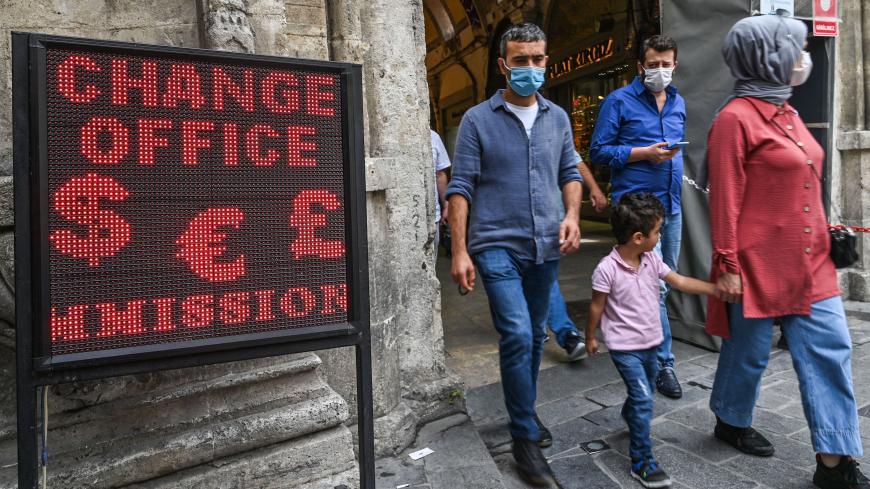 People walk past a screen near a currency exchange agency near the Grand bazaar in Istanbul, on Sept. 24, 2020. - OZAN KOSE/AFP via Getty Images

ISTANBUL — The Turkish lira sunk to a record low on Thursday after the central bank unexpectedly kept its benchmark interest rate on hold, heaping pressure on the beleaguered currency as investors already worried about political risks continue to exit its markets.

The lira fell as much as 2.1% against the dollar to 7.98 — another all-time low for a currency that has lost about a quarter of its value this year — after the bank’s monetary policy committee announced its decision. It steadied to 7.93 in later trading.

Economists had predicted policy-makers would raise the main one-week repo rate by 175 basis points, according to a Bloomberg poll. Instead, the bank kept it at 10.25%, well below inflation that officially stands at 11.75%. That means investors can expect a negative return on lira-denominated assets after inflation.

The bank did raise the upper band of its interest-rate corridor in an attempt to reduce liquidity, but its use of such complex back-door measures discourages investors because of its opacity. The move appeared to be an about-face from last month’s meeting, when it hiked rates by 200 basis points for the first time since 2018.

President Recep Tayyip Erdogan has pressed the central bank to keep interest rates low to encourage lending and boost the economy. Erdogan believes that higher interest rates cause inflation, while most economists subscribe to the opposite view, and he fired the previous central bank governor for refusing to cut interest rates.

“Political pressure is clearly making the central bank reluctant to enact further conventional rate hikes, and this will inflict fresh damage to its credibility and raise the risk of more abrupt falls in the lira,” wrote Jason Tuvey, a senior economist at Capital Economics, in a research note.

The bank has taken steps since August to prop up the lira and slow rapid credit growth, which expanded by 25% in the first half of the year, according to the biannual report by the European Bank for Reconstruction and Development (EBRD).

Cheap loans have been the main thrust of the government’s push to keep the economy afloat through the coronavirus pandemic, which caused gross domestic product to shrink by 10% in the second quarter.

“No politician wants to raise interest rates when the economy is struggling,” Roger Kelly, who covers Turkey as lead regional economist for the EBRD, said in an interview earlier this month after the release of the report.

“There’s an overreliance on monetary policy rather than fiscal policy to stimulate the economy [because] politicians don’t want to raise taxes or cut spending, so they give the heavy lifting to the central bank. The problem with that is loose monetary policy causes the lira to depreciate, and that’s when you have dig into your reserves,” he said.

Turkey has spent $10 billion of its reserves just since July trying to prop up the lira, according to Johns Hopkins economist Steve Hanke. “Turkey is burning through its foreign exchange reserves like a house on fire,” he tweeted last week. “If that’s not bad enough, I measure Turkey’s inflation at 36.57% per year and climbing,” which is three times the government’s figure.

Worries about Turkey’s current account deficit, which hit $4.61 billion in August, and its other external liabilities have driven out a wave of foreign investors, who have sold a net $13.4 billion of Turkish stocks and bonds this year, according to Bloomberg.

Geopolitics are also weighing on the lira. The Turkish military is believed to have tested a Russian antiaircraft system that is designed to shoot down NATO jets last week. The US administration has stalled sanctions that the Congress pledged to impose after Turkey acquired the Russian missiles last year.

The prospect of the election of Joe Biden, who is leading in opinion polls ahead of the Nov. 3 presidential vote, may increase the likelihood Turkey could be now be sanctioned, hitting its fragile economy.

Ahead of a meeting with NATO counterparts on Thursday, Defense Minister Hulusi Akar told Bloomberg that Turkey wants technology transfers and shared production for any future missile deals — something the United States has ruled out if Turkey were to acquire its Patriot system. “Only Russia has responded to Turkey’s needs suitably,” Akar said.

The chairman of the US Senate’s foreign relations committee, Jim Risch, said last week that Turkey’s test of the Russian S-400 system was “beyond the pale” and that US law requires it to sanction Turkey for deepening its defense relationship with Russia.

Finance Minister Berat Albayrak has said the economy will still grow this year by 0.3%, but others are less sanguine. The EBRD expects a contraction of 3.5% in 2020, in line with most forecasts.

“Whether we actually see this depends on so many variables: on the policy front, if a [currency] crisis happens, whether there is a resurgence of the pandemic and we get more containment measures in Turkey or abroad, and geopolitical factors that could potentially impact growth,” Kelly said.

A senior government official told Reuters this week the government may soon reimpose measures to enforce physical distancing as the country’s coronavirus numbers surge. Any new restrictions will be narrow in scope to shield the economy, he said.

The official also said that the total number of infections is about five times higher than figures the Health Ministry provides to the public, which do not include asymptomatic cases.

The health minister admitted last week that the government is only releasing the number of patients exhibiting symptoms after the main opposition party published a leaked Health Ministry document that showed the total number of cases is 20 times higher than what is being shared publicly.

The ministry said on Thursday that 2,102 more “patients” were infected and 71 people had died, raising the total number of cases the government has reported since March to 355,528 and deaths to 9,584.

A senior Interior Ministry official tweeted on Thursday that the Reuters story was “completely baseless,” but did not say which part of the story was unfounded.