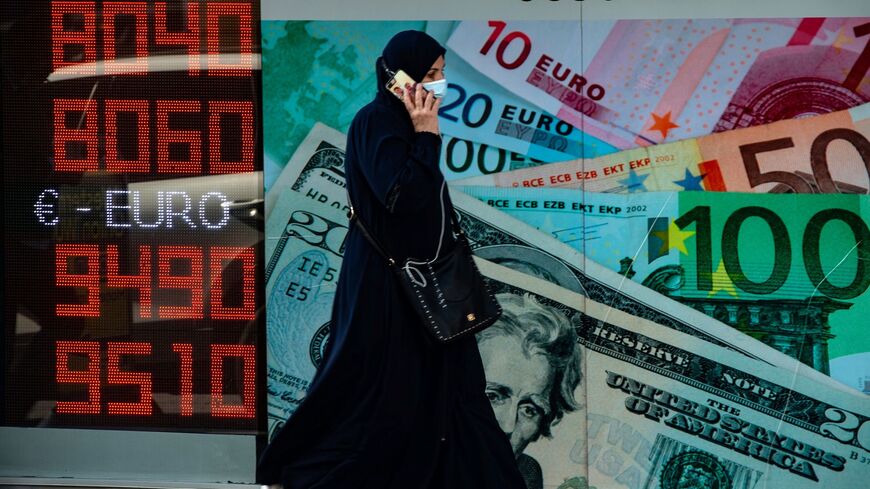 A woman walks past an information screen displaying rates in front of an exchange office in Istanbul, on Oct. 26, 2020 as Turkey's lira set a new record low against the US dollar. - YASIN AKGUL/AFP via Getty Images

At 6 p.m. Istanbul time Tuesday, the Turkish lira was trading at record lows of about 8.20 per US dollar and 9.70 per euro, continuing the currency’s longest rout since 1999.

The losses continued Tuesday as a political spat deepened between French President Emmanuel Macron and Turkey's Recep Tayyip Erdogan, who called on citizens to boycott French products after the French leader’s remarks about Islam. Erdogan also filed a lawsuit Tuesday against anti-Islam Dutch lawmaker Geert Wilders for a series of tweets deriding the Turkish leader, including one describing him as a terrorist.

The turmoil comes as Ankara faces ongoing political tensions on multiple fronts. A Turkish research vessel is conducting energy prospecting activities in disputed waters of the eastern Mediterranean Sea, prompting Athens to call for the imposition of EU sanctions on Turkey.

Turkey also faces potential US sanctions for testing its Russian-made S-400 missile defense systems on Oct. 16. Speaking to lawmakers with the ruling Justice and Development Party in Malatya Sunday, Erdogan dared Washington to follow through on sanctions threats.

"The US does not know who they are dealing with,” Erdogan told lawmakers Sunday. “Impose the sanctions already, whatever they may be.”

Analysts believe the looming sanctions are likely weighing on the Turkish lira, though ongoing disruption caused by the COVID-19 pandemic have also slowed economies worldwide. Still, the Turkish Central Bank’s lack of action to stem the lira’s depreciation remains a primary cause for the ongoing slump, said Wolf Piccoli, co-president and political risk analyst at Teneo Intelligence.

“It’s multiple factors; it’s a messy situation,” Piccoli told Al-Monitor. “The Central Bank is clearly politically constrained and politics per se are not helping because Erdogan has taken this aggressive stance” toward European and US allies.

“Plus, everybody knows that by now, Turkey’s firepower to try to sustain the lira is extremely limited,” Piccoli added, in reference to dwindling reserves spent to bolster the lira throughout the year.

Turkey’s currency has depreciated more than 26% since January. During the same period, foreign investors have sold $13.3 billion of Turkish equities and bonds, the most since 2005, according to Bloomberg. Ongoing losses can only be stemmed by “a significant hike of real interest rates,” Piccoli said.

In a tweet Monday, Turkish Finance Minister Berat Albayrak said October economic data showed the nation’s economy was “on the course to enter the path of growth,” citing increases in confidence indices for the service and retail trade sectors.

Still, tourism revenue remains a fraction of previous years due to the pandemic and the travel sector has also suffered setbacks, with the nation’s flagship carrier, Turkish Airlines, announcing Monday it would place foreign national pilots on unpaid leave for six months.

Eray Yucel, an economics faculty member at Ankara’s Bilkent University, said the Turkish economy has been volatile since 2016, when a combination of terror attacks, a coup attempt and subsequent instability shook markets.

He said Turkish policy-makers have since been unable make a “soft landing” amid the economic turmoil and citizens have grown inpatient as the Turkish lira has depreciated over the years.

“I think the markets are valuing the overall stance, not just of the Central Bank, but also of the government and political authorities,” Yucel told Al-Monitor.

Yucel continued, saying policy-makers have not restored confidence among foreign investors, who have raised doubts over the government’s medium-term economic programs and budget proposals, and that rising internal debt could eventually pose further challenges.

“I see a sense of being lost, that nothing is guiding the economy now,” Yucel told Al-Monitor.

He added, “In the meantime, fiscal balances might go into an alarming region. The political authorities’ tendency toward spending, injecting some money into the economy is not stopping so some other problems, like a fiscal balance crisis, may come about.”