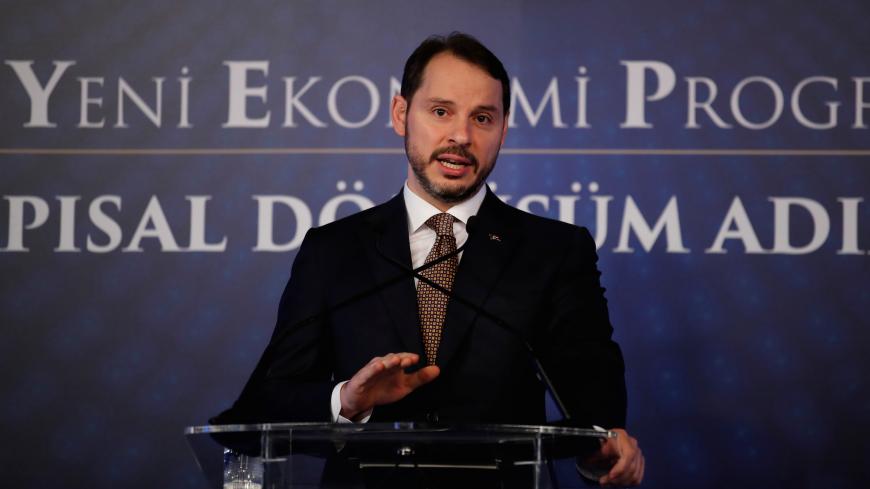 ISTANBUL — The Turkish lira fell for the fifth consecutive day Wednesday, approaching record lows last seen in the 2018 currency crisis, as the nation’s economy continues to weather the impacts of the novel coronavirus pandemic.

The lira lost 1.5% against the dollar Wednesday, slumping to 7.19 per greenback. Negative pressure persisted on the currency despite a rare conference call by Turkish Treasury and Finance Minister Berat Albayrak, in which he assured investors bank reserves were more than adequate and that state regulators would not impose capital controls.

While the pandemic has strained most emerging markets, Turkey’s economy has been particularly impacted due to concerns over state policies that have depleted central bank reserves in effort to prop up the lira in recent months.

“There is no confidence in what the authorities in Turkey are doing and that is why Turkey gets punished at the end of the day,” Wolf Piccoli, co-president and political risk analyst at Teneo Intelligence, told Al-Monitor.

Piccoli said he expects the economic downturn to persist as a slump in tourism this summer combined with a growing trade deficit would likely leave state regulators with few resources to revive the economy as the spread of the coronavirus slows.

“The way they can get out of it in the medium term is to hike interest rates,” Piccoli told Al-Monitor. “The other solution is an agreement with the [International Monetary Fund], which remains unlikely for now.”

President Recep Tayyip Erdogan has repeatedly stated he would not seek assistance from the IMF, a long-held policy by members of the ruling Justice and Development Party.

The developments come as the coronavirus pandemic continues to hit economies dependent on foreign investment, such as Turkey, where the central bank has reportedly spent millions of dollars in recent days to prop up the currency.

Such spending has diminished reserves, as Turkish regulators have sought to bolster local businesses through a mix of tax deferments and new restrictions that limit foreign currency swaps by Turkish banks.

Former Turkish economy czar and leader of the newly founded Deva Party, Ali Babacan, told Bloomberg Monday that state measures to defend the economy amid the pandemic should be more focused on stimulus programs and fiscal spending in the short term.

“If the response isn’t large and timely, the cost will probably be massive,” Babacan told Bloomberg.

Calculations by Bloomberg also suggest Turkey’s net reserves may be in negative territory once swaps are removed after falling more than $15 billion to about $25 billion. Though the figures are unconfirmed, speculation persists over the depth of central bank resources available for regulators to mitigate ongoing pressure on the Turkish economy.

Regulators have also sought to bolster the economy by lowering borrowing costs to help companies and consumers refinance debt, encouraging banks to offer loans at more favorable rates. The measures spurred a 60% increase in lending over 13 weeks through April 24, with commercial and retail loans growing by 80% and 45%, respectively.

The impacts of such actions remain to be seen, but Eray Yucel, a professor of economics at Bilkent University in Ankara, said weaknesses in Turkey’s consumption-driven economy have been building up in recent years and are being exacerbated by the pandemic.

“The Turkish economy has taken an inward orientation, I believe, so we haven’t seen a soft landing,” Yucel told Al-Monitor. “We’ve seen many economic activities, which did not bring in foreign exchange, somehow erode reserves in proportion to GDP and other [metrics].” He added, “I believe the problems we see these days were embedded three or four years ago.”

Yet as the number of new COVID-19 cases and recorded deaths have declined in recent weeks, some positive signs have also begun to emerge for the local economy. Turkish Airlines announced Wednesday it planned to begin offering limited flights in June, while the Education Ministry signaled the nation’s schools may reopen June 1 if positive trends continue.

Still, Yucel said state regulators would need to seek out long-term solutions to rehabilitate the economy with interventions beyond short-term financing.

“I don’t believe the problems will be solved in the near future,” Yucel told Al-Monitor. “Some structural provisions will be needed, as I see it … especially the structure and coordination across the government, the central bank and other regulators.”

Though reports indicate the central bank is currently in discussions to open swap lines with foreign banks, including the US Federal Reserve, Yucel said the current fiscal policies would need to be reworked for long-term financial stability.

“Swap lines require consistent policy stances on the side of Turkish policy-makers,” Yucel told Al-Monitor. “In the absence of a [sound] stance, something consistent and well-studied, I believe swap lines alone won’t be the cure.”