Egypt to switch to cash subsidies instead of bread

The Egyptian Ministry of Supply’s plan to shift from in-kind bread subsidies to cash subsidies triggered controversy amid fears of an increase in the rate of inflation. 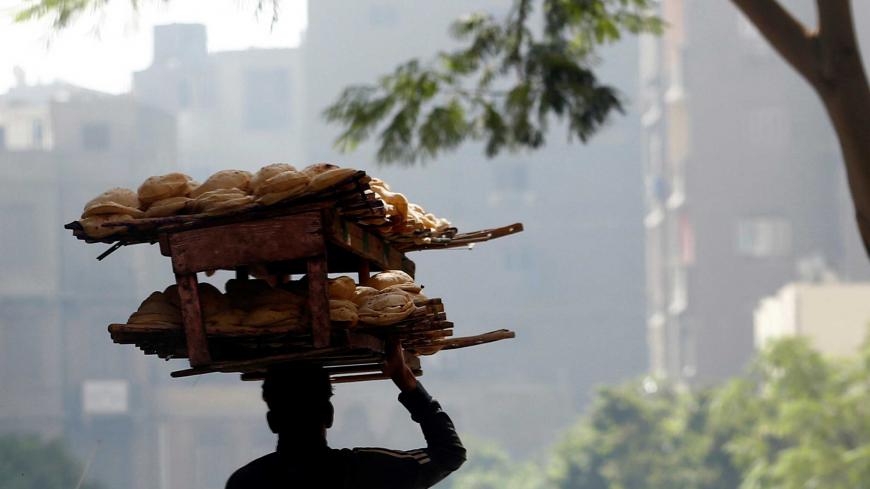 During a July 29 press conference, Egypt’s Minister of Supply Ali al-Muselhi said each citizen who qualifies for the subsidy receives five loaves of bread daily, at 5 piastres each (about a third of a US cent). The spokesman for the Supply Ministry, Mohammed Suwaid, said the production of one loaf of bread costs 57 piastres (about 3 US cents).

According to the Ministry of Finance, 76.8 million Egyptians, the vast majority of the population, benefit from bread subsidies and are entitled to about 140 billion loaves per year.

Muselhi told the Masrawy news website that under the plan, each citizen who qualifies would receive 75 Egyptian pounds (roughly $4.20) at the beginning of each month as a direct cash subsidy to purchase bread at an unsubsidized price. He said this system would guarantee that these subsidies reach the proper recipients without intermediaries. “Citizens will buy a loaf of bread at its unsubsidized price. The subsidy will be disbursed in cash instead,” he said.

Egyptian economic analysts and experts expressed diverging opinions about the plan of the Egyptian Ministry of Supply. Some called for postponing the shift from in-kind subsidies to cash subsidies amid a surge in prices crippling Egyptian citizens. Others, including some Egyptian members of parliament, praised the plan. They believe that it would curb corruption and eliminate wastage witnessed under the in-kind subsidy system currently in place, and that it would also ensure delivering state subsidies to their proper recipient.

Hisham Ibrahim, a professor of economics at Cairo University, told Al-Monitor, “This is not the right time to shift from in-kind subsidies to cash subsidies. This should be the last step in the government's economic reforms, especially in light of the surge in commodity prices in the Egyptian market.”

He called for shifting from in-kind to cash subsidies on staple goods — such as sugar, oil and rice — distributed by the government to citizens under the ration card scheme, before thinking about turning to in-kind bread subsidies to cash subsidies.

Ibrahim said the shift from in-kind to cash subsidies would subject the purchase of staple goods to supply and demand changes, depending on each citizen’s purchasing power. “This will improve product quality and promote competition among producers, while specific brands are now being imposed under the ration cards system,” he said.

Parliamentarian Basant Fahmi, a member of the parliamentary Economic Committee, praised the Ministry of Supply's shift from in-kind bread subsidies to cash subsidies but feared this measure would raise the inflation rate in Egypt.

According to monthly statistics published by the Central Bank of Egypt, the core inflation rate for November stood at 25.54%.

Fahmi told Al-Monitor in a telephone interview that cash subsidies increase citizens’ purchasing power allowing them to buy what they really need. She said, however, that this may increase inflation as bakeries will sell at he actual production cost price. “This must be given careful consideration,” she said.

Member of parliament Mohamed Ismail also praised the Ministry of Supply’s plan, saying, “Some social classes do not deserve state subsidies as they can afford to buy staple goods at their original prices. Yet they are still benefiting from state subsidies. The applicable system leads to a large daily wastage of bread. Citizens are getting more bread than what they really need.”

He called for shedding light in the media on the benefits of the new system, and said the Ministry of Supply is preparing a database showing how many citizens are eligible for subsidies to prevent false rumors from spreading about what will happen when the in-kind bread subsidies are lifted. “Citizens will prefer the new system. The cash subsidies they would receive would allow them to buy their monthly needs of bread and save some money on the side,” Ismail said.

Yomn El Hamaky, a professor of economics at Ain Shams University, told Al-Monitor that this is not an appropriate time to apply this plan, calling on the Ministry of Supply to set a standardized price for bread to prevent bakery owners from controlling prices on a whim. “The Ministry of Supply should also give priority to depriving noneligible citizens of ration cards. Then the government should turn the in-kind subsidies of staple goods to cash subsidies,” he said.

An official of the General Division of Bakeries, a government authority, told Masrawy news website on condition of anonymity that the liberalization of the price of bread in the current period would be a mistake in view of the country’s unstable economic conditions, adding that this would allow the private sector to control wheat imports and thus bread prices.