A controversial decision by President Abdel Fattah al-Sisi to cut bread subsidies despite an earlier promise not to tamper with the price of subsidized loaves has raised concerns that this move may trigger a wave of unrest reminiscent of the bread riots of 1977. 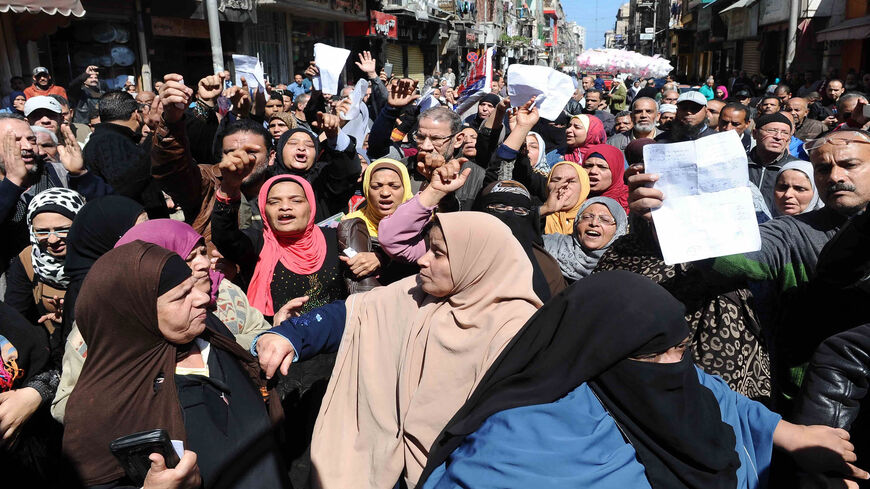 Dozens of Egyptians take part in a demonstration in front of a government office against the decision of the Supply Ministry to limit the distribution of subsidized bread to holders of a new system of digital cards issued by the ministry, downtown Alexandria, Egypt, March 7, 2017. - STR/AFP via Getty Images

Egyptian President Abdel Fattah al-Sisi's call to raise the price of subsidized bread has sparked controversy in Egypt; supporters welcomed it as a wise and timely decision while critics condemned it as the last straw.

"It is time to increase the price of the 5 piaster loaf," Sisi said in reference to the subsidized bread provided to at least 60 million Egyptians. His comment came during the opening of a food production plant in Sadat City in the Northern Delta Aug. 3.

"Some might tell me to leave this [matter] to the government, to Prime Minister Madbouly or to the supply minister. But no, I will take it upon myself [to raise the price] in front of my country and my people," Sisi announced defiantly.

In an attempt to allay public concerns about the potential price hike, he continued, "I'm not saying we raise the price [of bread] significantly to 60 or 65 piasters — the cost of producing it — but it [an increase] is necessary."

Sisi stopped short, however, of stating how much the increase would be. Meanwhile, Minister of Supplies Ali Moselhi was quoted by Al-Watan newspaper as saying that his ministry would immediately begin studying the issue in light of the president's directives and present its findings to the Cabinet.

Sisi explained that the potential price increase would contribute to the cost of much-needed school meals that he vowed would be made available to millions of students. "Eight billion Egyptian pounds [$510 million] are needed annually for the school meals," he noted.

The price of subsidized bread has remained unchanged in Egypt for decades. In a country where 32.5% of the population lives in extreme poverty — according to a 2019 survey published by the national statistics agency, CAPMAS — any change to the food subsidy system is a touchy issue that some analysts like Hassan Nafaa, professor of political science and economics at Cairo University, warn may spark social unrest.

"The issue of raising the price of subsidized bread is very dangerous; no unilateral decision should be made regarding this issue," Nafaa tweeted. "Rather, it merits a serious societal dialogue in a healthy atmosphere free from fear and hypocrisy."

Bread was at the forefront of the demands of the anti-government protesters that took to the streets in January 2011 calling on then-President Hosni Mubarak to step down. "Bread, Freedom, Social Justice," the activists in Tahrir Square had chanted in what became the signature slogan of the 18-day mass uprising that unseated Mubarak.

In March 2017, protests broke out in Alexandria and other Egyptian cities — in defiance of an anti-protest law in place since 2013 — when Minister of Supplies and Domestic Trade Ali Moselhi announced plans to cut bread subsidies by reducing the number of loaves to three per ration cardholder.

"We need to eat. We want bread," was the echoing cry of the protesters at the time. The unrest forced the government to quickly rescind its decision. Fearing a repeat of the deadly bread riots of 1977 that erupted after then-President Anwar Sadat announced a change in the subsidy program to meet International Monetary Fund (IMF) demands.

The government announced it would keep the price of subsidized bread unchanged for consumers. The size and weight of the subsidized loaves have considerably shrunk since last August. A loaf of the subsidized bread now weighs 90 grams (3.2 ounces) instead of the original 110 grams (3.9 ounces). As bread is one of the main staples of the Egyptian diet — particularly for the poor — more loaves are now needed to satisfy people's hunger.

Under Egypt's subsidy program, which also includes cooking oil, rice, pasta, tea and sugar, ration cardholders are allocated five loaves a day each at the subsidized rate of 0.05 Egyptian pounds ($0.0032) per loaf.

The slashing of fuel and electricity subsidies — part of austerity measures undertaken by the government to meet conditions set by the IMF for Egypt to obtain a $12 billion loan in 2016 (and another tranche of $5.2 billion last year) — has piled pressure on impoverished families struggling to make ends meet.

The word bread in Arabic literally translates into "life," and for many Egyptians — hard pressed by the hikes in the prices of housing, basic commodities, transportation and electricity that resulted from the November 2016 flotation of the local currency — an increase in the price of bread is tantamount to denying them life.

On Aug. 4, a handful of consumers gathered outside a small bakery in the southern Cairo neighborhood of Maadi, awaiting their turn to buy the subsidized bread. Shaker, the bakery owner, who asked to be identified by his first name only, assured them that the price of the subsidized loaves "remains unchanged."

"It may be a while yet before the government implements the price hike," he told Al-Monitor. "These kinds of decisions take weeks, even months before they are carried out."

But his words failed to pacify the worried consumers.

"If the price of bread goes up, God knows what I'll be feeding my children then as all we eat is bread," complained Mostafa Metwally, a street cleaner. "I urge the government to have mercy on us."

"In the past, I used to stack up on groceries with my monthly ration of 21 pounds [$1.34]; now the supplies I buy [at subsidized prices] fall well short of my family's needs, although the ration has doubled," said Fatma Merghani, a retired schoolteacher and registered cardholder.

In 2017, the government doubled rations allocated to millions of cardholders to 50 pounds ($3.18) from the previous 21 pounds, for up to four people registered on a single-family ration card, but the additional subsidies have done little to alleviate the burden on the poor and needy in the face of the soaring price of staples such as rice and oil.

"It would be catastrophic if bread prices too were to be raised," Merghani told Al-Monitor. "How would we survive?"

Meanwhile, Sisi's comments met with a firestorm of condemnation from critics on Egyptian social media platforms. The Arabic hashtag #Anything But (Our) Loaf of Bread quickly went viral on Twitter Egypt, and a video of Sisi from some years ago vowing in a TV interview broadcast on the independent CBC channel not to touch the price of subsidized bread was widely circulated on social media.

On the other hand, media networks loyal to the state quoted prominent figures such as  Ahmed Karima, professor of Islamic law at Al-Azhar University, as saying they fully support the president's decision. "The excess bread in rural communities is used to make prohibited [alcoholic] drinks," Karima was quoted by Al-Masry Al-Youm as saying.

Attia Hammad, head of the Bakeries Division at the Cairo Chamber of Commerce, told Al-Monitor that the decision was "long overdue" and "a historic step."

"The price of subsidized bread has remained unchanged for decades; it should have been adjusted every 10 years or so," he said. "It is a step we have been calling for quite some time. The 5 piaster note is no longer in use nor valid, and so it was necessary to increase the price [of bread]."

It remains to be seen whether Sisi will follow through on his decision and whether those affected will express their grievances by rioting as has happened in the past. In a sarcastic post on his Facebook page, journalist and former TV talk show host Hafez al-Mirazi questioned whether Egyptians themselves have changed or if the small space for free expression they had in the past has been all but entirely shut down.

"No citizen would risk his/her life [to protest] having less bread or the high cost of living … unless they have no bread at all. Then perhaps, they would have nothing more to lose," he wrote.