Can Cairo stave off discontent over soaring prices?

Egypt walks a tightrope between reforming its economy through austerity measures without having protests over food prices and food availability tip everything over. 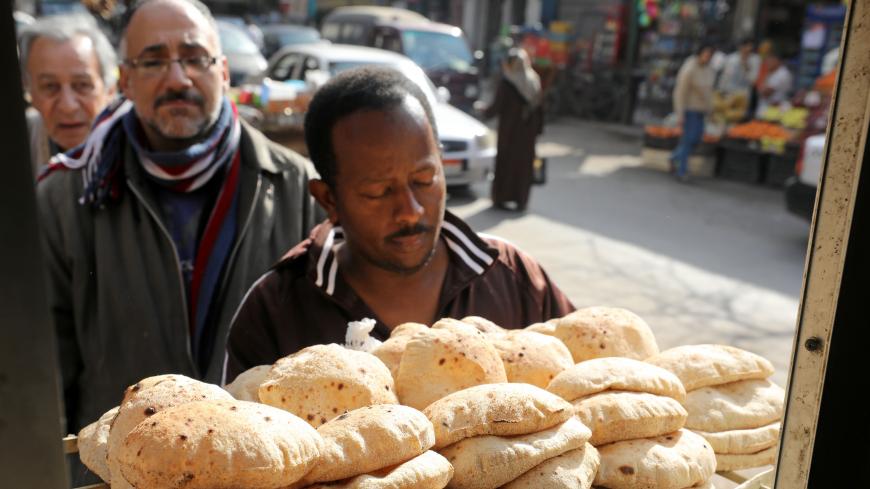 As pressure builds on Egyptian livelihoods following the devaluation of the pound and the slashing of fuel subsidies in November, some analysts are wondering if another uprising is looming on the horizon for Egypt. They warn that a new wave of unrest would be bloodier than the 2011 uprising and could spell disaster for the country, still reeling from the turbulent post-revolution transition.

Since the Egyptian pound was floated, inflation has skyrocketed to its highest level in decades, reaching almost 30% in January (up 5% over the previous month). Prices of basic food items, medicine, transport and housing have soared, prompting Egyptians to cut spending to make ends meet. The prices of some basic food items have shot up by up to 40%, according to CAPMAS, the Central Agency for Public Mobilization and Statistics. President Abdel Fattah al-Sisi has more than once exhorted Egyptians to tighten their belts, commending them for enduring “the difficult circumstances” but he has also warned that further cutbacks “are inevitable.”

While Egyptians have largely heeded the call for restraint, there was a rare show of anger when protests broke out in at least four Egyptian provinces March 7. The demonstrations were triggered by bread shortages in some bakeries after Supply Minister Ali Moselhy announced a new bread subsidies system that he defended as “necessary to curb waste and corruption.” Hundreds of demonstrators blocked roads and cut railways in Alexandria, Giza, Kafr El Sheikh and Minya in protest at the minister’s abrupt decision to reduce the share of bread allotted to holders of paper ration cards to 500 loaves per bakery a day from the original 1,000 and 4,000 loaves (depending on the number of consumers in the bakery’s vicinity.) The minister said the paper cards were “outdated” and needed to be replaced by the newer electronic smart cards introduced in 2014 — a step he insisted “would go a long way in curbing misuse and profiteering by bakery owners.” The share of smart-card holders (five loaves of subsidized bread per person a day) would not be affected, he said.

The decision to implement the new system was quickly reversed, however, over fears that the simmering bread crisis could provoke wider tumult. Seeking to allay citizens’ concerns that the move was a prelude to a reduction in their quotas of subsidized bread, Moselhy held a televised press conference on the day of the protests, apologizing to “all citizens who had not received bread” and asserting that their quotas would remain untouched. Promising to resolve the crisis within 48 hours, he blamed bakery owners for the crisis, hinting they were making profits off the subsidized flour they received from the government.

”Look at bakery owners; see how wealthy they’ve become in the last five years,” he said.

Fayza Khattab, a mother of five who lives in the Cairo working class district of Warraq, complained that even with the smart ration card, she often has to wait more than two hours in line to buy the subsidized bread.

In the last six years, government spending on food and fuel subsidies has represented more than a quarter of annual government expenditure (more than the country spends on education and health services combined). Wheat is sold to retailers and distributors at low cost by the government, and bakers in turn sell the bread to consumers at similarly low prices, barely covering their production costs. Not surprisingly, this has given rise to a thriving black market for the subsidized wheat, which is often resold by the bakeries at a profit rather than turned into bread. Economists and analysts have persistently called on the government to reform the bureaucratic subsidy they say leaves too much room for theft and corruption.

While the bread crisis was quickly contained, it sounded the alarm, alerting authorities to the growing public discontent over soaring prices and economic mismanagement. Some analysts have warned that the protests might be the first rumblings of a violent social backlash spurred by economic hardship.

In early November, journalist Ibrahim Eissa, an outspoken critic of the government, warned in his newspaper Al-Maqal that public anger was mounting, adding that the authorities knew that the lack of backlash to that point was only “an artificial calm.”

“The patience of Egyptians is wearing thin,” Cairo University political scientist Hassan Nafaa told Al-Monitor. “Despite the economic pressures they are facing, citizens have so far restrained themselves from protesting because they are weary after two revolutions. They also fear further turmoil as they see the civil wars in some of the neighboring Arab countries. But if people are hungry and if their basic needs are not met, there is likely to be another rebellion,” he warned, adding that if that happens, “It would be messy and bloody.”

Nafaa said inclusiveness and strategies to build trust are key to restoring lost faith in the government; he attributed this loss to “the lack of transparency in implementing state policies.”

Tensions have been simmering since the pound’s depreciation — a key requirement by the International Monetary Fund for Egypt to secure a $12 billion loan needed to finance the country’s budget deficit and shore up dwindling foreign currency reserves. Economists and analysts have lauded the flotation as “a much-needed reform that would restore investors’ confidence in the economy, helping foster growth and job creation.”

But the austerity measures have been painful for the average citizen in a country where the shrinking middle class was already struggling with flat wages, high inflation and mounting unemployment.

Egyptian authorities have been banking on Sisi’s popularity to carry off the bold economic reforms, but the recent price hikes have prompted a decline in Sisi’s approval ratings, which according to a poll conducted in mid-December 2016 by Baseera (Egyptian Center for Public Opinion Research) fell by 50% during his second year in office.

“Sisi is no longer perceived as ‘the savior’ who rescued the country from political disaster by helping overthrow the Muslim Brotherhood president. That is because many Egyptians today see the government as incapable and lacking political vision. Many people also feel they are being sidelined and marginalized,” Nafaa said.

Nearly a third of Egypt's population lives under the UN poverty line of $1.90 a day, according to CAPMAS. And analysts expect poverty levels to increase before the economy shows any signs of recovery. In a press statement released March 8, the New York-based Fitch Ratings, an international credit rating agency, described the risk of social unrest in Egypt as “substantial.” Fitch cited the threat as one of several challenges facing the government as it forges ahead with the envisaged reforms. Fitch, which had rated Egypt as “stable” in December, said “extensive near-term subsidy reforms were required to achieve the 2017 deficit targets.” This would increase inflationary pressure, and the risk of social unrest may once again prompt the government to pull back from some reforms, the agency said.

Still, there have been some positive signs lately that the country is on the right track to recovery. In January, investors flocked to buy Egyptian bonds, signaling a renewed confidence in the economy. The following month, the Egyptian pound regained some strength before retreating again. Ironically, the weak currency is helping the economy by boosting exports and luring back tourists. A 25% increase in non-petroleum exports in January (compared with the same month last year), along with new loans from the IMF and other sources, is beefing up foreign currency reserves, according to The Economist. The weaker currency is also proving to be a blessing in disguise for local manufacturers as more consumers are opting to purchase local products, which are more affordable than their imported alternatives.

Government officials are sounding an optimistic note, predicting inflation will ease during the second half of the year. That, however, will require a continued commitment to the reforms that were started. The real test will be the government’s ability to stave off unrest that could undermine the progress made so far. Nafaa said it is possible to quell the rising anger over soaring prices “through more equitable distribution of wealth, better communication of government policies, transparency and accountability.”

But economic reforms must go hand in hand with political reforms. “The government must also ease the crackdown on dissent, release detainees who have not committed terror crimes and bring more youths on board,”he said.