Will bulked-up wheat reserves keep the peace in Egypt?

After protests over a decrease in bread subsidy allocations, Egypt is reinforcing its wheat reserves. 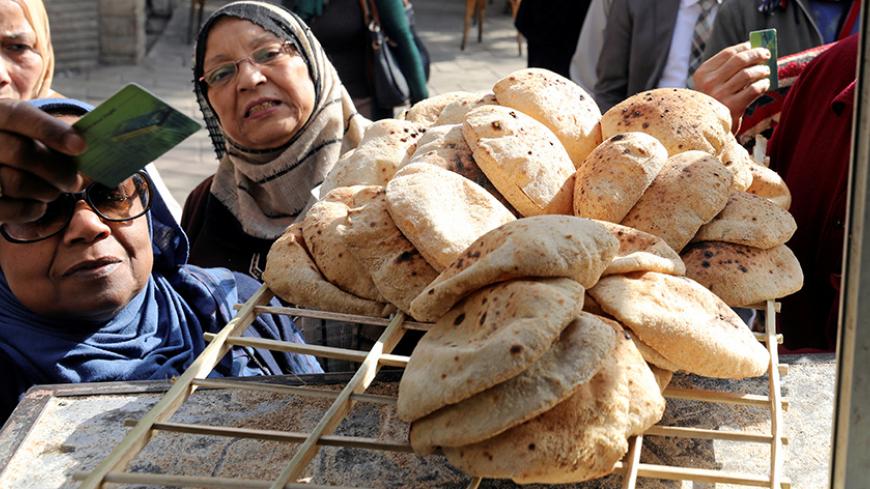 CAIRO — The Egyptian government is boosting its wheat reserves, in the first two weeks of March alone purchasing some 1 million tons, about 20% of the total it procured last year. There are several possible explanations for the move, but the unexpected purchase cannot be separated from the angry protests that erupted in several governorates March 6-7 after a Ministry of Supply and Internal Trade order cut the subsidized bread allocations to bakeries, supposedly to curb corruption and waste.

In Alexandria governorate during the unrest, police drove around distributing free bread in an attempt to calm the situation. They also promised to convey protesters' demands to officials. The effort appeared to persuade the demonstrators to stand down.

The Ministry of Supply and Internal Trade had immediately responded to the protests, with Minister Ali Moselhy apologizing at a March 7 press conference. Moselhy, newly installed in a Cabinet shuffle in February, explained that the distribution system would again be adjusted and that everyone would get their allotted amount. He said it takes about 10 million tons of wheat each year to cover demand through the bread subsidy system.

Egypt is one of the world’s top wheat consumers, with annual consumption as high as 16 million tons, Moselhy said. According to a March 16 Reuters report, Egypt's General Authority for Supply Commodities regularly imports 5 million to 6 million tons of wheat each year, while the private sector imports almost as much.

A spokesperson for the Ministry of Supply and Internal Trade told Reuters that the monthly consumption of state-bought wheat had increased in the past three months to 800,000 tons, after fluctuating between 700,000-750,000 tons in 2016 through November. Increasing wheat imports is part of a strategy to raise reserve levels, the ministry said, estimating that the strategic wheat reserve stands at more than 3 million tons, enough to meet demand for the next four months.

In a March 11 interview with CNN Arabic, Moselhy claimed that bakery owners had manufactured the crisis. “I issued an order to cut 500 loaves of flatbread from the shares of some bakeries,” he said. “Then, some bakery owners spread rumors that the state had reduced the subsidy on bread and, as a result, citizens took to the streets.”

Abdallah Ghorab, head of the General Division of Bakeries, disagreed with Moselhy's version of events. “The recent protests were brought about by the hasty decision by the [Supply Ministry],” he told Al-Monitor. “When citizens head to bakeries to buy subsidized bread, crises arise when citizens don’t find it. Therefore, the mistake should be admitted. The minister had the courage to apologize right away.”

Ghorab further stated, “Bakery owners cannot be accused of being behind the crisis. We cannot simply allege it was designed by them. If the situation hadn't been addressed immediately, it would have worsened. Therefore, any decision related to subsidized bread should be thoroughly studied, along with its potential consequences on citizens."

Amr el-Gohary, undersecretary of parliament’s Economic Affairs Committee, confirmed that the large purchase of wheat earlier this month had been aimed at building reserves to head off more protests, especially with Ramadan approaching. “Bread tops most people's list of necessary commodities,” he noted. “Therefore, the proactive import of such quantities is extremely positive.”

According to Gohary, the recent protests are a “very dangerous indicator.” Fortunately, he said, the problem was tackled quickly. Now, parliament can summon Moselhy to discuss what steps are needed to address the situation and the supply system as a whole.

Ibraheem al-Ghitani, an independent economic analyst and researcher, observed that the recent protests reminded people of the 1977 bread riots, when the government lifted subsidies to obtain loans from international financial institutions and some 80 people died in the ensuing unrest. He also told Al-Monitor that the rising cost of wheat undoubtedly had an influence on the decision to buy so much wheat earlier this month.

“The increase in the global price per ton of wheat in the next few months is one of the major reasons behind resorting to importing about 1 million tons in only two weeks,” Ghitani asserted. “The global price increased from $160 per ton in January to $166 in February. It is expected to continue increasing until mid-2017. This is according to the Chamber of Food Industries report issued in early March.” The report he cited projects a price of $170 per ton by May.