Egypt's proposed cash subsidies system has raised concerns among citizens despite its numerous advantages, in light of the lack of market supervision over product prices and availability. 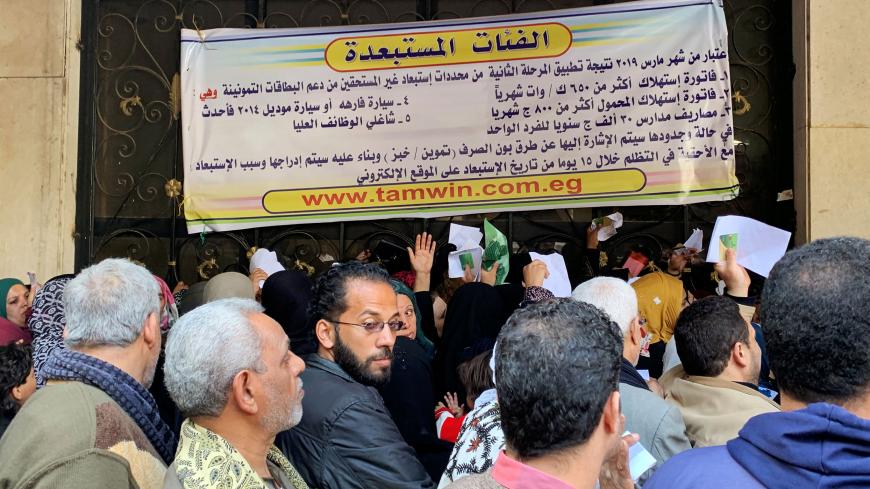 CAIRO — Many Egyptians, especially the poor, are concerned by the government’s apparent intention to replace food ration cards with cash subsidies. The Council of Ministers has said it is considering the change, but has yet to unveil the details of its discussions.

In a Jan.14 interview on DMC News, Egyptian Minister of Supply and Internal Trade Ali Moselhi expressed his ministry's preference for the cash payments program. He said cash subsidies aim to increase the system's efficiency and will not reduce the value of subsidies in any way.

The International Monetary Fund (IMF) Executive Board had said back in December 2017, “Making further progress on moving away from product subsidies to better‑targeted cash transfers would strengthen the social safety net." The statement came after the IMF completed its second review of Egypt’s economic reform program under a $12 billion IMF loan.

The Center for Political and Strategic Studies affiliated with the Egyptian Patriotic Movement party released a study Feb. 3 listing the advantages of conditional cash subsidies compared with in-kind subsidies. The party’s deputy leader, Osama al-Shahed, told Al-Monitor the party will submit the study to the Council of Ministers and parliament's Economic Committee. The Council of Ministers will discuss the study before any decision is made.

Shahed said that the study sheds light on the history of Egypt's in-kind subsidies system, which marks its 80th anniversary this year. The study also reviews discussions held some 20 years ago about switching to cash subsidies.

He said the in-kind subsidies system wastes resources, and the subsidies are not always received by those who actually deserve them.

The Egyptian government provides subsidies for products such as oil, rice, bread, pasta and tea, resulting in reduced prices for citizens with zero income living on state subsidies, those with no stable fixed income or those with income below the minimum monthly wage of 1,200 Egyptian pounds ($76).

Abdel Shafi, an economist and researcher at the Cairo Center for Economic and Strategic Studies, told Al-Monitor, “The cash subsidies program has several advantages, most notably reducing the huge expenses incurred by the state to provide in-kind subsidies.”

Shafi argued that handing the citizens cash payments through governmental offices or via bank transfers would greatly reduce the program's cost and perhaps increase the citizens’ ration of subsidies.

In a Jan. 12 article, Al-Shorouk newspaper quoted anonymous Cabinet sources as saying the government is considering increasing the value of subsidies to individuals to 200 pounds ($12.70) if the cash program is implemented, up from the equivalent of 140 pounds ($8.90) currently applied in the in-kind program.

Shafi explained that currently it is difficult to update or check the accuracy of the data of citizens receiving in-kind subsidies.

“Some citizens provide false or forged documents about their income. Others would not report to the state that their income increased and that they no longer are eligible for subsidies. Some may also hide the income they earn from activities in the parallel economy," he said.

By transferring cash subsidies to the citizens’ bank accounts, the state would be able to know the value of their savings from their account statements. He explained that the central bank is able through its databases to discover whether a citizen has other bank accounts or not.

“The access by noneligible citizens to discounted goods encourages them to sell these goods on the black market at a higher price,” he said. “This is a natural result of having two prices for the same commodity — a subsidized price and a nonsubsidized price.”

According to Shafi, selling all commodities at one price and giving cash subsidies to eligible citizens, who would buy goods at regular prices, would end the existence of two prices for the same commodity and by extension, the black market.

Shahed noted that overhauling the subsidies system would provide an opportunity for the government to require citizens to meet strategic conditions in exchange for “conditional cash subsidies.” Under some countries' cash systems, recipients must produce specific health reports annually for all their family members and ensure their children attend school regularly.

“The Egyptian Patriotic Movement’s study showed that Brazil and Mexico succeeded in reducing their [school] dropout rates and improving the health status of their citizens. Consequently, poverty rates were curbed thanks to the conditional subsidies program,” he said.

However, the largest sample of those targeted by the study have expressed unwillingness to switch to conditional cash subsidies. “They fear this system would lead to increased prices or unavailability of commodities,” Shahed said.

Rashad Abdo, head of the Egyptian Forum for Economic and Strategic Studies in Cairo, agrees with those citizens. He told Al-Monitor, “The in-kind subsidies system should not be replaced by the cash subsidies system unless there is a mechanism to control markets in terms of products’ availability and prices.”

He noted that some traders and monopolist networks benefited from the decision to float the pound exchange rate against the dollar in November 2016. They took advantage of the ensuing inflation to charge exaggerated prices for goods.

“The provision of goods at discounted prices through subsidized goods distribution outlets has helped the poor somewhat avoid a high cost of living crisis,” Abdo said. “Refraining from offering in-kind subsidies in the future — should the cash subsidies system be applied — may trigger waves of high prices caused by monopolists. The citizens will not be able to bear such a burden.”