How Egyptians are responding to soaring costs

A campaign to lower food prices for Egyptians has good intentions, but economic experts say it will have no lasting impact. 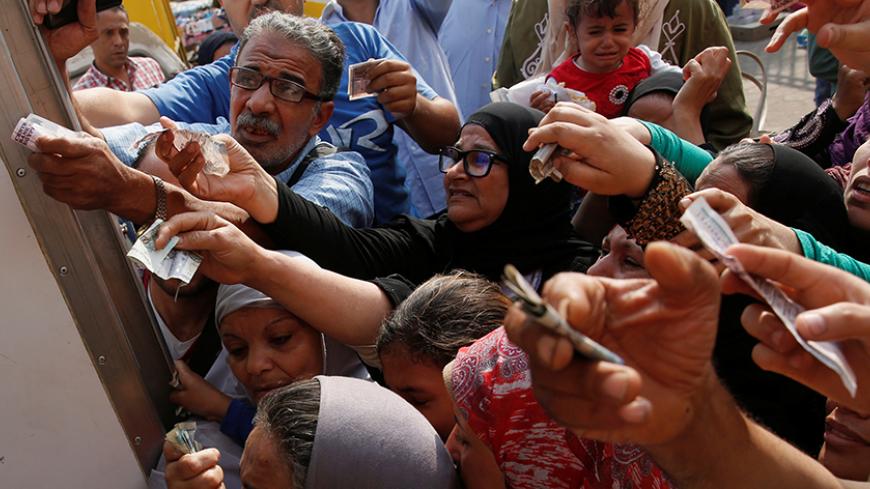 Egyptians gather to buy subsidized sugar from a government truck after a sugar shortage in retail stores across the country in Cairo, Oct. 14, 2016. - REUTERS/Amr Abdallah Dalsh

Egyptian consumers are being pushed — perhaps to their breaking point — by the surging US dollar exchange rate, the state’s lifting of energy subsidies and its imposition of a new value-added tax. Many people can no longer meet their needs with their low incomes.

In response, a call has been issued for a popular revolt Nov. 11. This call is known among social media users as Thawret el Ghalaba, which translates to Revolution of the Poor. The movement’s Facebook page, which has attracted more than 100,000 followers, urges the public “to overthrow the corrupt regime and liberate the country from those who have betrayed and humiliated the Egyptian people.”

Some TV news personalities and officials have become concerned about the movement and decided to launch their own effort to help the poor. On Oct. 3, TV anchor Amr Adeeb announced The People’s Order, a campaign seeking to lower commodity food prices by 20% for three months. His TV crew, which is also working on the campaign, said that as of Oct. 16, 55 companies had joined the campaign.

Among those companies, however, are many that do not even produce food, such as factories and businesses that manufacture ceramics and stationery products, hospitals, telecommunications providers and some producers of cotton, textiles, electronic devices, car parts and perfumes.

Moreover, Promo Media advertising agency is offering a 25% discount on newspaper and TV advertisements for companies participating in the campaign.

But what is the effort achieving?

Rashad Abdou, the head of the Egyptian Center for Economic Studies, pointed out the fleeting nature of the program. Though he said he appreciates the effort involved, he considers it a temporary tranquilizer rather than a cure for rising costs.

“Egypt is not a poor country. There is no such thing as a poor country that starts large projects such as the new administrative capital city, cultivates a million [acres], allocates 200 billion Egyptian pounds [$22 billion] for small and medium enterprises, upgrades sewage systems and electricity and transportation networks, and develops the Suez Canal,” he said.

He added, “However, the crisis lies within the distribution of wealth and the subsidization not reaching those who most often deserve it. Moreover, there is also the crisis of many institutions monopolizing some resources, which is similar to the crisis of the dollar, which is monopolized by the black market while the state lacks dollar liquidity. “

This forced the state to subsidize commodities using foreign exchange reserves. As those reserves dwindled, the state had to seek a loan. “One of the conditions of the loan was to lift subsidies of many services, including energy services,” Abdou said. “Solving the crisis will not be achieved by initiatives that call for lowering prices, but rather by focusing on economic development and regulating monopolies. Achieving both would end citizens’ suffering so they could enjoy decent lives without needing urgent initiatives or remedies.”

Egyptian economist Wael El Nahas, an expert on capital markets, agrees with Abdou. He told Al-Monitor that black market currency traders are hoarding US dollars to increase their value. This is also done daily with commodities such as medications, baby formula, sugar and rice. Nahas also noted that this is not a problem brought about by a lack of resources or by state poverty, but rather an economic crisis caused by mismanagement.

“The People’s Order campaign is useless, since the [companies] that joined it are selling their products without a profit margin, which means the government collects fewer taxes. Raising tax collections is one of the key pillars of reducing the budget deficit. When tax collections are low, the government will have to curb the budget deficit by curtailing subsidies on commodities or even raising taxes on them,” Nahas said.

“Therefore, the amount of money the citizens save in the three months of the campaign will be collected later in the form of raised prices of the already-supported services or new taxes,” he added.

Medhat Nafea, a professor of economics and finance at Cairo University, told Al-Monitor the intentions behind the campaign are good and many businesspeople and TV personalities are honestly trying to relieve citizens’ burdens. However, the campaign is just an extended sale, he said.

In cooperation with the Ministry of Supply, The People’s Order campaign organized aid convoys to sell discounted products. Some outlets also are selling discounted products in governorates such as Beni Suef, Kafr El Sheik, Sohag and Dakahliyya, which were finally able to receive the products Oct. 20, during a price surge and severe shortage of sugar.